Chrontendo Episode 4 is now available for download, albeit at a much later date than originally intended. A month ago, I stated Episode 4 was "well under way." Why the delay? After recording the voiceovers, I found I was becoming increasing dissatisfied with the sound quality. After some mental debate I finally decided to obtain a better microphone. Said microphone arrived several days ago and all the voiceovers were re-recorded. I have certainly not yet mastered to art of microphone placement but am pleased with the results so far. Hopefully, this will give Chrontendo a patina of professionalism that was completely lacking in the first three episodes.

Now... about the new episode:

Our Most Valuable Game award this episode will go to Tower of Druaga. 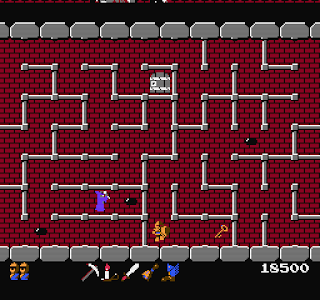 Not well known in the US, TOD was a considerable success in Japan. While most players, myself included, would not consider it a good game, it is one of the first examples (and certainly the first on the Famicom) of a modern style console game. With its finite storyline, end-of-game boss and collectible objects and powerups, TOD points the way towards such games as Super Mario Bros. By implementing a fantasy setting, very, very light RPG elements, and a simple plot into a top-down maze game, Namco established a new type of game with TOD. The most obvious example of TOD's influence would be Legend of Zelda, released several months after this Famicom port. Surprisingly, Tower of Druaga was originally an arcade game from 1984.

Elevator Action. A well done, accurate port of the arcade classic.
Star Force. Decent, if not spectacular vertical shooter.
Road Fighter. Underacheiving, but reasonably enjoyable top-down driving game.
Hyper Olympic. One half of the game released in US as Track and Field.
Astro Robo Sasa. Unique but difficult game featuring a little guy and his great big gun.

And the "avoid at all costs" category: 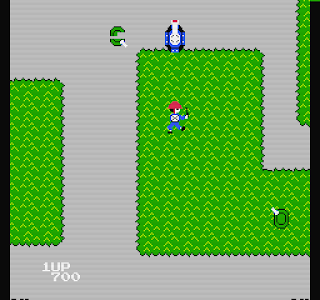 Field Combat. Taito commits the video game equivalent of a war crime. Yes, that thing in the character's hand is supposed to be a gun, not an oil can.
Geimos. A dull, poorly designed psuedo-3D shooter

Unfortunately, a minor error was included in this episode: the music used in Hyper Olympic was identified as John Williams' Olympic theme. In fact, it is from Vangelis' score for "Chariots of Fire." I suddenly realized this after uploading the video.

Chrontendo Episode 4 may be downloaded here.

Episode 5 is around 60% finished and promises to be the most eventful yet!

Yes, Episode 3 is available for download. Covering the first half of 1985, we see Nintendo add a handful of new developers for the Famicom, including Jaleco, Konami, and Taito. A few very interesting games are released, but also, in my opinion, the first real duds for the system. Jaleco, in particular, produces a few barely playable titles, and the Taito port of Space Invaders is very disappointing.

On the other hand, we have some historically interesting titles. Will Wright, later of Sim City and The Sims fame, gets his first game, Raid on Bungeling Bay, ported to the Famicom. We also encounter Wrecking Crew, a virtually forgotten Mario Bros game which occupies the uncomfortable position in the franchise between the original Mario Bros and Super Mario Bros. There is also a brief history lesson on video games from the video game craze of the early 80s until the release of the NES in 1985.

For whatever reason, I neglected to post earlier about the release of Episode Two. It was released a little while ago on archive.org. This episode can also be streamed. I've definitely been remiss in updating this blog. Heck, Episode Three is almost ready to go up, and Four is well under way.

An interesting episode, as we get the first non-Nintendo developed games for the Famicom. Available to download here.
Posted by Doctor Sparkle at 9:26 PM 8 comments:

Chrontendo Episode 1 is now available for download! Please allow me to drop the arch, "royal we" tone of the previous post in order to make a few personal observations.

I can't really say what possessed me to take up such a lengthy and taxing project as Chrontendo. But once I had decided to play every Famicom/NES game, I felt I should somehow document my progress. For the sake of, you know, future generations. I had been inspired by some of the other video game internet shows out there, such as Consolevania and Retrocore, but really had no idea how to make a video such as those. I was aware that some sort of magic pixies lived inside my PC, and that they could use their special powers to transform images and sound into a video format that could be shared on the internet. After being quickly initiated in the dark arts of video and audio formats and compression, frame rates, aspect ratios, Flash animation and video editing software, I felt I was ready to try to throw something together.

The resulting video is a little rough around the edges. The voiceover work could certainly be better. I had no previous experience in recording my own voice, and I'm not much of a pubic speaker, so this aspect of the project was probably the most frustrating. Still, the results are listenable and the quality of the voiceovers should improve in later episodes.

Here is a short sample of Chrontendo Episode 1. I've included the introduction and the footage for Donkey Kong. The entire video may be downloaded, in much better quality, on archive.org. The list of games covered in this episode may be found in my previous post.

Download full version of Chrontendo Episode 1.
Posted by Doctor Sparkle at 11:37 AM 5 comments:

You might be asking yourself, "What is Chrontendo?" By some strange coincidence, we have the answer you are seeking.

Chrontendo is an attempt to chronogame the Nintendo Entertainment System. That is, we will be playing every game released for the NES in chronological order. More accurately, we will be playing every game produced for both the NES and its Japanese equivalent, the Famicom. Furthermore, we will be documenting this project with regularly updated video weblogs. Production on the first three episodes is underway, and the first installment should be availalbe shortly.

This naturally raises a question. "Since our time on Earth is so limited, and life is such a precious commodity, why in God's name would anyone spend the enormous amount of time, effort and bandwidth on such a pointless, fruitless endeavor?" That question really cannot be answered here, but we are able to provide some details about the project.

The period of time covered will be from 1983 to 1994. An exact figure has not been reached, but we estimate around 1300 games will be covered. Each episode will cover around 15 games. It is our sincere hope that these episodes will be released on a very regular basis, and that this project will be realized in our lifetimes.

Chrontendo Episode One will contain the following games:

This episode will run approximately 45 minutes.
Posted by Doctor Sparkle at 7:25 PM No comments:

Posted by Doctor Sparkle at 12:29 AM No comments: