Amazingly, Episode 6 is ready only a week after Episode 5! This is certainly a record for me, but the fact is that I had been working on 6 quite a bit while finishing 5. The time I've take off from Chrontendo in December and January has served to bolster my enthusiasm for the project, and I seem to be working much faster than normal. Additionally, I'm beginning to learn how to edit these things together more quickly.

On to Episode 6! Not as eventful as Episode 5, the new episode still contains a lot of interesting games. December 1985 saw Famicom titles hitting the shelves at a furious pace. A wide variety of publishers are represented, and the soon-to-be-legendary Square makes its Famicom debut (with a game they themselves did not develop). 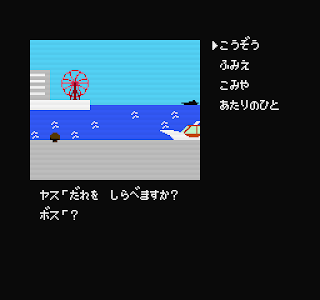 Portopia Renzoku Satsujin Jiken - The second Famicom game from Chunsoft and Enix, Portopia was destined to revolutionize the Japanese gaming industry almost as significantly as Super Mario Bros did. An enhanced port of a Chunsoft's 1983 game for Japanese computers, Portopia established the genre of "point and click," menu-based adventure games. Your goal is to solve a murder mystery by questioning suspects and witnesses and by examining various locations for clues. This is done by using the d-pad to navigate a column of "move," "talk," and "examine" options. The success of this game inspired numerous copycats over the next few years, and would eventually lead to such mainstays of the Japanese gaming scene as "Visual Novels," dating sims, and hentai games.

This game also features the most striking introduction sequence on a Famicom game so far. Rather than the typical title and menu screen rising up from the bottom of the screen, Portopia begins with the sound of an approaching police siren. The title then appears one character at a time, accompanied by a typewriter sound effect. This highly original title screen demonstrates how Chunsoft was beginning to push the gaming envelope in Japan.

Thexder - Longtime Enix rival/partner Square makes its Famicom debut with a port of this Game Arts 1985 computer game. Eventually, Thexder would be released for Apple and Commodore computers and would pick up quite a following in the US. While I personally do not like this game, I do find the ideas behind the game quite interesting. With its vertical and horizontal scrolling, long passageways filled with enemies, and emphasis on exploration in order to find the various items squirrelled away in its nooks and crannies, this game looks forward to later, better titles such as Castlevania and Metroid.

Lunar Ball - Known as Lunar Pool in the US, this Compile developed title manages to make a fun and creative pool video game. Seemingly inspired by miniature golf courses, Lunar Ball features a wide variety of unusually shaped tables. Factor in adjustable friction for the tables, and craziness ensures. 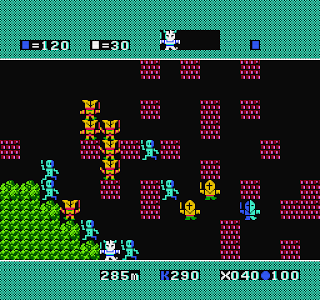 Bokosuka Wars - While frustrating and unfair, this game does get points for being creative and interesting. Essentially an early strategy action game, Bokosuka Wars is somewhat misunderstood in the West, and has been labeled as one of the worst games for the system. In fact, once the principles behind the game are understood, it is quite playable and challenging. Unfortunately, the frequency with which this games kills you in a random fashion will undoubtedly cause many players to throw thier controllers at the screen in disgust.

Obake no Q Tarou: Wan Wan Panic - The US version of this game, Chubby Cherub, has been rightly pilloried for its ugly graphics and unappealing protagonist. The Japanese version, based on a popular manga and anime series, makes a bit more sense and is a little more difficult. While hardly a classic, this game is still noteworthy as the second side scrolling platformer for the system.

Galg - Or Zenou Senkan Galg, as the box art says. This somewhat mystifying game is a vertical shooter crossed with an RPG. Much like Tower of Druaga, there are various hidden objects and power-ups throughout the game which can be found by performing specific actions. Unlike Druaga, this game has not been well documented in the West. To the casual player, it appears to be an unexceptional and repetitive shooter. 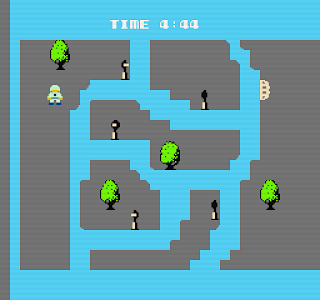 Dough Boy - You will have Front Line flashbacks while playing this ridiculous war game from Kemco.

Spelunker - An Irem port of the well-known US computer game. Unfortunately, Irem seriously botched this version, and the Famicom release of Spelunker finds itself on various "worst NES games" lists. Perhaps most notoriously, your character cannot fall a distance any greater than around half his own height without dying. Regardless, this game was released in the US by Broderbund.

Chrontendo Episode 6 may be downloaded at archive.org here.
Posted by Doctor Sparkle at 11:02 AM 5 comments:

Wow. I have now amazed even myself with the incredible amount of time it took me to get Episode 5 ready. Especially considering it was "60% finished" two months ago. Unfortunately, the holidays and illness resulted in Chrontendo being put on hold for the last two months. But the new episode is now ready to download and it is a hella rad one.

Episode 5 covers August through November of 1985. A few major events in the lifespan of the Famicom occurred during those months and are discussed in Ep. 5. And of course, 15 more games are played.

Our MVG this month is: 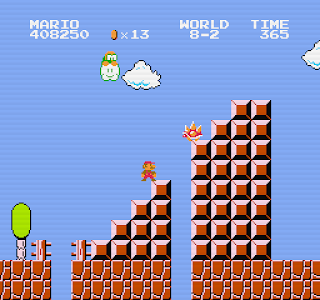 Really, what other choice could it have been? SMB is sort of the turning point around which the history of the Famicom revolves. It was not only hugely successful and influential but also a shining example of a damn fine game.

Other games worth mentioning:

Challenger - Strange, interesting, Frankenstein monster of a game from Hudson Soft. Unusual for its time, it features a large overworld, horizontal and vertical scrolling and a rather lengthy quest to rescue a Princess. The same basic idea would be vastly improved upon by Nintendo in Legend of Zelda.
10 Yard Fight - Early football game from Irem.
Pooyan - Uber-cute port of the Konami arcade game. Pigs versus wolves.
Battle City - Tanks roll around and shoot other tanks. More difficult than it sounds.
Ninja Jajamaru Kun - Decent spin-off of Jaleco's Ninja Kun. This ninja is so hard that after killing a monster he then goes after the monster's ghost.

Games worth mentioning due to their awfulness:

Kinnikuman Muscle Tag Match -- Cheap, ugly tie-in to manga series/toy line, designed by the stealth development company Tose. Perhaps the worst Famicom game so far. Amazingly, this sold huge numbers in Japan. As the first game on the Famicom based on a comic book/cartoon/TV show, this paved the way for countless terrible games featuring licensed properties. Thanks, Kinnikuman! Also, this was one of the very first third-party developed games to be released in the US.

This episode documents the beginning of an exciting time for the Famicom, when it was making the transition from its infancy to maturity. In the wake of Super Mario Bros, a number of games will appear featuring SMB-like features: rudimentary plots, lots of scrolling, and larger, more defined "worlds" to traverse through. Intriguingly, these sorts of games began appearing almost immediately after SMB. Such titles as Challenger, Obake no Q-Tarou AKA Chubby Cherub, Thexder, and Goonies would all hit the Famicom shortly.

We'll also see a slow increase in the number of games created specifically for the Famicom. Prior to this, there were only two non-Nintendo Famicom titles that were not based on an earlier arcade or computer game. This episode will see six more, including the first Famicom-only game from an established arcade giant, Taito's Sky Destroyer. For better or worse, the displacement of game designers' primary focus from the arcades to home consoles begins here.

Chrontendo Episode 5 may be downloaded here.