Hey folks, I'd like to say that I'm just now finishing up Chrontendo 37, but that's not quite the case.  All the videos have been recorded, and most of the voice overs are done, but there is a still a bit of work to do.  My excuse is that I've been pretty busy lately.  Now that both my wife and I are working full-time, we have the funds available to go out and do stuff.   Last week, we went to one of those gosh-darned rock concert things, namely Richard Thompson.  Which was a weird experience, since we seemed to be just about the youngest people at the concert.  The audience vibe could politely be described as "NPR listeners."  The dress code was shirt tucked into blue jeans -- light blue jeans, not the dark blue or black jeans that you and I might wear, but sort of a sky-blue color that you only see older guys wearing.  Generally accessorized with a brown belt.  Tommy Bahama shirt: optional.  A lot of dudes there also looked sort of like Steve Jobs.  Though we did run into a guy our age that my wife knew.  He and his friend were cheering and standing on their chairs, much to the consternation of the folks around them.

Anyway, I've seen RT before so I knew what to expect from the crowd, but it still felt strange going to a show full of people my mother's age.  And then we had a friend visiting from out of town for a few days.  And tomorrow we're going out to another show, this time for some ukelele action (For those not in the know, chicks with ukeleles is a thing right now.)

While you're waiting, please note that after a long hiatus, I ♥ The PC Engine has been active lately!  Perhaps the Chrontendo curse is not as deadly as I thought.

Also, I figure that last episode must have made Kelly Family fans out of some of you, so here's a little treat, courtesy of Boing Boing.

As progress continues on Chrontendo 37, it's turning out to be one of those episodes which lacks a really standout game, but still features several "interesting" titles.  Déjà Vu is one of those. (Hey! Sit down, everyone!  Don't get all excited....  I'm not saying DV is a bad game, simply that the clunky interface is a pain in the ass and it makes you wish you had a mouse.)


Another example of an "interesting" game is Kaijuu Monogatari. AKA Shell Saurs Story.  Yes, that's what the box cover says: "Shell Saurs Story."  I don't know what it means, either.  But according to King Mike's translation, the game concerns "...animals called Shell Monsters who wore small shells on their backs."  Kaijuu Monogatari is not Namco's first RPG -- they've already published several, Megami Tensei being the most significant.  But this is the first really blatant Dragon Quest clone from Namco. 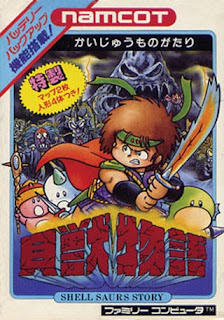 I don't see any shells.

Like Dragon Quest II and III, Namco's game uses standard turn-based combat, random encounters and a multi-character party.  Kaijuu Monogatari starts you off as a solitary weak and defenseless hero, even more so than DQ.  The most humble monsters lurking around the starting castle stand a pretty good chance of killing you, unlike DQ's famously wimpy slimes.  You will immediately encounter bats and slugs in groups of two, each capable of doing 1 or 2 points of damage, and each with 6-8 HP themselves.  Your own attacks do 1-2 damage, and you start with 14 HP.  I think you can figure out the math yourself.   Assuming you survive your first battle, you'll need to immediately head back and pay for a night at the inn to recover, then repeat. 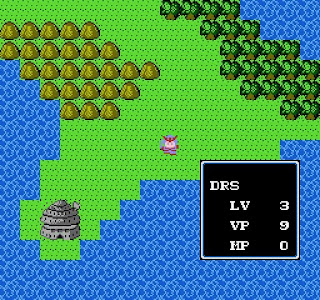 Once you gain a level, you'll should be able to withstand two battles between inn visits.  After that it becomes smoother sailing, but like most RPGs of the era, you'll need to gain several levels before venturing out too far.  Once you've gotten strong enough to actually start exploring, the game "really" begins.   Except....

As I mentioned, Kaijuu Monogatari has four playable characters.  In most RPGs you encounter additional characters as you progress along your journey, adding them to your party. Modern games will give you pre-leveled characters: each new party members is already at about the same level as your other characters when they join.  Older games, such as DQ II will introduce characters at level 1.  You will need to push them to the back of your lineup and desperately hope they don't get killed in every battle; but at least they gain levels quickly.  Kaijuu Monogatari does things differently.  Intially, each character is controlled separatley.  You start out playing the main hero, but through a menu option you can switch to character number two, Kupikupi, at any time.  The thing is: Kupikupi also starts out with basic armor weapons, no experience and little gold.  If even if you've leveled up your main character, you will now need to do the exact same thing with Kupikupi - right down to the "fight one battle, rest at the inn" routine.  And then you repeat all this again with characters three and four! 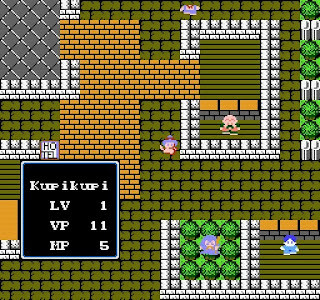 Back to square one.

Early JRPGs are notorious for their repetitive, grindy, nature.  But Kaijuu Montogatari is the only game I've seen that makes you go through the whole process four times!  Eventually, you will reach a spot where your hero and Kupikupi can cross paths and combine forces.  Until then, however, you are forced to switch back and forth between characters, leveling them up individually.   I don't know if this is a stroke of genius or an example of pure idiocy.  One hand, it's cool to be able to see what each party member was up to before joining the hero.  On the other hand -- having to build up each character from level one is pretty irritating.  It might work better if combat had more of a strategic element, and less of pure luck.  The fact that each character has an absurdly small number of inventory slots, doesn't help much either.  Also: getting constantly poisoned sucks.  As the CRPG Addict has wondered, why does every single 80s RPG love to poison you over and over?

Guess what's also in Chrontendo 37?  The 1988 arcade round-up!   1988 isn't really considered a big year for arcade games; there is nothing quite as genre-defining as Contra or Double Dragon, both of which were featured in the 1987 round-up.  There is plenty of technical innovation in '88, however, as Namco introduces its System 2 board, which was capable of all sorts of SNES-like sprite manipulation effects.  And Atari brought back 3D games in a big way with Hard Drivin', five years after the failure of the first polygon based 3D game, I Robot.  1988 will turn out to be a big year for 3D, with Starglider 2 coming out for the Amiga and ST. 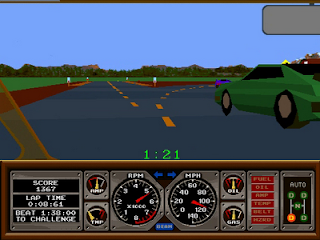 Speaking of computer games, the 1988 computer game round-up will turn up in episode 38 or 39.  The next few episodes will be pretty packed, since we've got one big game coming out in each episode.  So think of Episode 37 as the calm before storm.

Finally, my apologies to Cornervizion, since I unwittingly let a comment of his get stuck in my spam filter for a while.  In this comment he mentions Retro Core, a very fine videocast that was pretty influential on Chrontendo, in terms of both content and length.  The fact that it was able to uploaded in hour-long videos on Archive.org was the reason I ended up going with Archive myself.

I've Been Working on Chrontendo, Really!

Granted, I haven't gotten that much done since the last post, but I've had distractions.  I've just started playing 3D Dot Game Heroes, and to make matters worse, it's barleywine season. This means high-calorie, high-alcohol beers that make me fat and lazy.  But Bigfoot Ale only comes once a year, so what choice do I have?

Also, I keep getting killed or arrested in Déjà Vu...

In linked-to-Chrontendo related news, I see some folks are coming in from Reddit.  Hi, everybody.

Update!  I was at last able to walk into a police station without getting instantly handcuffed and arrested, thus beating Déjà Vu!
Posted by Doctor Sparkle at 10:16 PM 7 comments: