We should have an update in about two days. Thanks for your patience.
Posted by Doctor Sparkle at 11:36 PM 5 comments:

Hair Like the Feathers of a One Winged Angel

While at the office today, I saw the most extraordinary thing. A female co-worker had some perfect looking modern-day Japanese videogame hair.  The hair seemed to separate itself into many dozens of spiky-but-not-too-spiky little subdivisions that stuck out at slightly unnatural angles and moved away from the scalp in parabolic arcs. Oddly, all the little spikes looked soft, unlike the spikes in a Jersey Shore type hairstyle. The lady didn't look like an animoo/otoku geek type chick, but regardless, she was rocking some totally Final Fantasy Crisis Core cutscene style hair. (I suspect this same hairstyle might also be worn by K-Pop bands or something, but I'm not 100% sure.) I don't know what prompts someone to style their hair in such a manner, but, man, it looks like a lot of work.

I'm sure you guys have been following the game news lately, but there seems to be some upsurge in the vast, unwashed masses of videogame fans making a noticeable impact on the decision making processes of videogame companies. There was that whole "Operation Rainfall" which seems to have produced a US release for The Last Story as well as Xenoblade.  Bioware is now supposed to be preparing a response to the fan outcry over the ending of Mass Effect 3. Also, you have perhaps seen the Wasteland 2 Kickstarter thing? Proving the Double Fine adventure game was not a fluke, fans ponied up a million bucks in a few days, just for a sequel cultish 80's computer game.  I'm sure all this caused thousands of Sega enthusiasts to suddenly start dreaming of a Shenmue 3 Kickstarter.

Anyway, it's just odd that as democracy seems to be waning in larger public sphere (increasingly restrictive "anti-terrorism" laws, crackdowns on internet usage, etc, ) it has started flourishing in the world of electronic games.

I've updated the links recently. A couple interesting sites have been added. In terms of insane chronogaming type projects, we have The RPG Consoler, a fellow who is playing every console RPG (as the name would seem to imply.) So far, he is up to the first  Dragon Quest. These things usually end in a very tragic type of mental breakdown, so wish the poor fellow well.

There has been some traffic coming in from a blog called Why Modern Video Games Suck, which turns out to be not as curmudgeonly as it sounds. He actually likes lots of modern games! But he does find old school gaming principles endearing, so the blog is definitely worth a read.

Chronsega 7 is mostly recorded, so expect some news soon.
Posted by Doctor Sparkle at 11:41 PM 8 comments:

Now that the epically delayed Chrontendo 43 is finally behind us, we can move on to other things. Chronsega 7 is looming on the horizon, and I can assure you it will be arriving in the near future. Spanning late 1988 to winter/spring 1989, it will cover one of the darker moments in Sega's history. They ended up sitting out the 1988 holiday season almost entirely. As Famicom games flooded the market, and as the PC Engine was picking up steam, Sega released a scant two games in December 1988: one Master System title and one Mega Drive title. One final Master System game was released in early 1989, and then... the console was dead in its home country. Eventually, the Genesis began to find success in the US, bolstered by games from several popular western publishers. Then the Master System would unexpectedly return to life in Europe and Brazil, outselling Nintendo consoles and even the Mega Drive for years in those territories. For the moment, though, we'll be seeing the Master System at its lowest ebb, with a steady trickle of low-quality games hitting the shelves.


Today, however, I want to present some evidence for a theory I posted earlier: that the release of a "rock opera" signals the creative and/or artistic demise of a musical act.


First, some parameters. It's not always clear whether an album should be classified as a rock opera or a concept album. The two genres are somewhat blurred together, but I would say that a proper rock opera has a few distinguishing features. It should have some consistent narrative and at least one well-defined character. Songs should make some attempt to progress the narrative or define the character. Often, songs will be sung in the voice of one the characters. In theory, you should be able to listen to a rock opera and understand the story. Concept albums, such as Sgt Peppers or Ziggy Stardust, might show some thematic unity, but it's pretty difficult to find a story in them. Can anyone out there tell me anything about "Weird and Gilley" and why exactly they wanted to crush Ziggy's "sweet hand?" Or why the world was ending in five years? It didn't help that Bowie stuck some older, unrelated songs on that album (e.g.,"Moonage Daydream.") And don't even get me started on Diamond Dogs (What the hell is a "diamond dog?" They are "poachers and they hide behind trees." WTF?)
Our first piece of evidence:
The granddaddy of the rock opera is usually considered to be The Pretty Things' S.F. Sorrow. This established the "life of the male protagonist" format that later examples all followed. A great record, which followed several earlier great records from The Pretties. Immediately after the album was released, the band's founder and guitarist, Dick Taylor quit, followed by its drummer, Twink. The band released one more good album then slid into mediocrity. 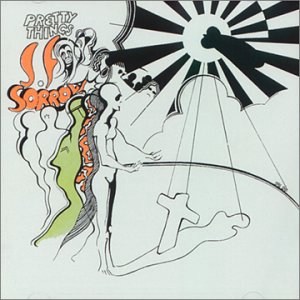 At the time of Tommy's release, Pete Townshend apparently cited S.F. Sorrow as a major influence. Nowadays he claims to have never heard the album. Either way, Tommy follows the Sorrow pattern very closely in its structure. You might think that Tommy disproves my theory, since The Who's next album was also their best (Who's Next). But this is simply because The Who were too powerful to be destroyed by one rock opera; it took two. After Quadrophenia, there was a precipitous drop in the quality of The Who albums. Only a few years later, they would be putting out crap like Face Dancing.

The Kinks were another fine British band slain by the rock opera. Their entry into the genre, Arthur was yet another LP in the "album named after the protagonist" mode. They made two good records after Arthur, and then, tempting fate, switched into an all rock opera career mode (Schoolboys in Disgrace, Soap Opera, etc.)! This folly wiped The Kinks off the map for the rest of the 70s.
Other examples:
Genesis and The Lamb Lies Down on Broadway. Now, this is not my favorite Genesis album (that would be Foxtrot,) but it was a substantial commercial and critical success. It's release was followed by the most interesting guy in the band leaving. After that Genesis released two pretty-good records, and then the guitarist split.  At this point the band was basically just a rhythm section, and began its slow, steady decline from one of the most influential bands of the 70s to purveyors of utter crap in the 80s. A terrible toll was also taken on Phil Collins, who quickly underwent an astonishing transition from a great prog/fusion drummer to this guy:
To this day, complete strangers come up to Phil Collins and punch him in the face because of this video.
Pink Floyd
I'd say PF's decline began well before The Wall, but the fact is they only released one album worse than The Wall. That was its successor, The Final Cut, which is sort of the musical equivalent of being kicked in the nuts. I understand The Wall was a huge success and many people like it, but compare video footage from The Wall tour with earlier stuff like Live at Pompeii. You'll see a band that is a shadow of its former self, and has seemingly lost the will to live.
The Small Faces
Ogdens' Nut Gone Flake was a half great/half goofy rock opera-ish thing with wacky narration by Professor Stanley Unwin. The Small Faces celebrated its success by breaking up a few months after its release.
Jefferson Airplane
Blows Against the Empire was not quite a "real" Airplane album, but it was a silly sci-fi rock opera that spelled the end for the classic period of the band. It was followed by personnel shake ups, and a few years later, a name change to Jefferson Starship. I think you all know what happened then.


Green Day
Okay, Green Day was always sort of lame and derivative. Trust me, I know. I remember them from 'back in the day.' But they clearly became even more annoying with American Idiot.
Now obviously there are exceptions to every rule -- the rock opera rule included. Some of you might be itching to shout, "But Dr Sparkle, what about [some boring piece of crap] by [terrible progressive metal band]?  Yes, I'm sure that Dream Theater or Queensrÿche or whoever has released a whole bunch of really amazing sci-fi/dystopia/religious allegory themed records. But since most people stop listening that kind of music once they lose their virginity, I really don't see any point in investigating this further.
And hey, there are still cool band putting out rock operas, like Fucked Up's David Comes to Life. Still, I strongly suspect the next Fucked Up record will be not quite as good as David. So unless anyone has some strongly compelling counter-examples, I'm going to consider this case to be closed.
Posted by Doctor Sparkle at 12:21 AM 15 comments: