By now, most of you will have absorbed at least some of the non-stop coverage of Sony's announcement of the PS4. We can't really call it an "unveiling" or a "revealing" or anything of sort, since Sony somehow managed to spend 3 hours talking about their new console without showing it, dropping a release date, or giving the slightest hint as to pricing. Instead, there was tons of typically silly sounding biz-speak like, "The living room is no longer the center of the PlayStation ecosystem. The player is." (I assume what this means is that Sony doesn't want you to think of the PS4 as a physical box that sits your living room, but as a more general brand that exists as some sort of Platonic Ideal, and can manifest itself it a variety of forms, such as, uh... the Vita?)

I have no idea exactly how well the PS4 is going to work for Sony. Every new game hardware system  released in the last few years has performed under expectations. The Wii U and 3DS both sold less than Nintendo hoped for, and the Vita is basically a huge flop. I assume this is due to a mass exodus of casual gamers from dedicated hardware to smart phones and tablets.  I can't help but wonder if we are experiencing the first stages of the decline of the game console right now. Regardless, my favorite piece of post-PS4 analysis has been this one from Gameological Society. It's a marvelously bitchy takedown of Sony's contention that the PS4's faster processor is going to save the game industry from its current malaise. Also, the fact that Sony has confirmed that your existing PSN games will not be transferable/playable on the PS4 is bound to piss off many gamers.

And the good news I mentioned? If there's a silver lining here, it's that Sony seems to be hinting that the PS4 will not block used games, though they haven't come right out and explicitly said this will never happen. As connoisseurs of old games, we will all agree that a console that can't play used games has very limited appeal.  It's sad to think that we've gone from eagerly anticipating rumored new features on upcoming consoles to dreading them.

As for the the bad news? Well, it came as no surprise, but Ziff Davis has shut down 1UP.com. This is a huge, huge shame, as 1UP was one of the few corporate-type game sites I actually liked. The quality of writing was always a few steps above most big game sites; they had a solid coverage of niche genres, such as retro games and RPGs; and they always seemed a bit more mature than the likes of Gamespot or IGN. The amount of content on 1UP has been slowly waning over the last couple years, in quantity, though not in quality. Lately they focused more on what the journalism world used to call "think pieces" instead of news and reviews. But the site has definitely felt somewhat empty and effete for a while now. 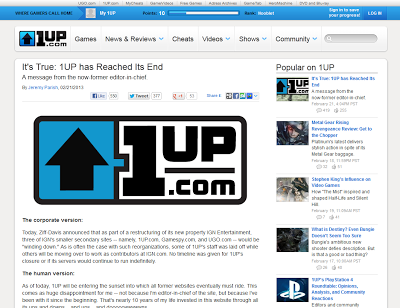 Some of the staff will be moving on to IGN; for example, Jeremy Parish already has some content up. Maybe there will a Retronauts revival at IGN! Many others, such as Bob Mackey, are being laid off, and my heart certainly goes out to them. For their sake I hope ZD has instituted some sort of decent severance package for them. God knows that takes some of the sting off unemployment.

I've been laid off twice myself, once from a company I was fanatically devoted to; the other time from a corporate entity I had no attachment to. The feelings ranged from anger/disbelief/bitterness to relief and something almost like euphoria. The constant worry that you experience when you think you are going to be laid off is terrible. There's a miasma of dread that hangs in the air when everyone in the office is expecting the worst. These things just eat away at you.  Once the inevitable finally happens, you feel hugely relieved.  In today's business world, there is no longer such a thing as job security. I was laid off from a hugely profitable Fortune 500 company which was actually hiring people at the same time my office was shuttered.  The reason I lost my job was not due to lack of business -- it was because the lease on our building was up. It was more profitable to hire new people in other locations than it would have been to renew the lease or find a new building. It's a cruel world out there today.

Any way: 1UP, I'll miss you guys. Good luck on your future endeavors.
Posted by Doctor Sparkle at 4:47 PM 11 comments: