You Input is Requested

Those of you who read the Twitter feed have already seen this, but I'm soliciting opinions from folks who have clear memories of playing SNES games on the real hardware.

You might be wondering why I'm asking about this. Please don't read anything into this. I'm just looking for input on representing SNES games.

The video below is around 8 minutes, and asks you to chose from three options on three different games. Your choices should not all the be same letter, so if you say "B is best on all three," I'll be suspicious. The best way to see the video is by downloading the full version from the link below. The video is pretty damn big, 500 MB but Mega usually downloads really fast.  Just click on "Download to your computer," and it will start downloading, and THEN ask you where you want to save the file. That seems backwards, I know.

If downloading is not an option, you can watch it on Youtube here: http://youtu.be/-D7ygcqTOXc

However, the YT version will be have been reprocessed and will look different than the original video.

Thanks for your assistance.

And, yes, I know how hilarious it is that I missed that first coin in Super Mario World. I haven't played that game in years, OK?


Hello everyone! Today brings the return of Beertendo, with a very special episode. But first, a few announcements.

Don't bother checking the site for an April Fools Day post/video/etc this year. I think we can all agree that this kind of shit is played out. If I think of anything clever next year, maybe I'll work up a little somethin' somethin'. If you are absolutely starving for April Fools content, I suppose you can always rewatch the Chron-CD-i video.

Also, Chrontendo Episode 48 has obviously not dropped yet, despite it's promised arrival date of 3/21/14.  I was originally hoping Ep. 48 would be a quickie episode, but I've decided to add in the 1989 arcade game roundup. Anyway, it's coming along, and will hopefully be complete soon. To tantalize you guys further, I'll point out that Ep. 48 will feature American Dream, Coconuts Japan's pseudo-RPG slot machine game! Starring your favorite 8 bit mascot, Pachio-kun! Please contain your excitement.


Today, however, we are pleased to announce the thrilling fucking return of Beertendo, a recurring feature where I drink beers, and ... write about them. This installment will look at the wonderful, horrible world of British beers! To maintain the British theme, please keep Arne's Rule, Britannia on repeat while reading this post. Maybe picture me wearing a Beefeater outfit, or perhaps dressed like Austin Powers.

The story of British beer is one of glory and grandeur, followed by inevitable decline, much like the Empire itself. Many of the styles we Americans drink today originated in England: porters, stouts, pale ales, barleywines, etc. During the early years of the USA, British ale was the primary inspiration for our own beer, and this remained true until the influx of German immigrants in the second half of the 19th century. Like so many other things, brewing in the UK suffered during the rapid industrialization of the 20th century.  By the 1960s, a series of corporate buyouts, takeovers and mergers had consolidated the country's brewing industry into 6 major brewers. Today, many of the great British breweries have been absorbed into same multinational conglomerates that own the big North American and European beers. Additionally, lagers have displaced traditional ales as the preferred style among young British beer drinkers. As a result, if go into a typical London bar nowadays you'll find Heineken, Guinness, Stella Artois, Bud, and Foster on tap, just like you would anywhere else in the world. While quite a few traditional breweries still exist in the UK, many of the legendary British ales, such as Bass No. 1, Thomas Hardy's Ale, or Courage Imperial Russian Stout, stopped production some years ago. (Though after a 30 year hiatus, Wells and Young's began brewing Courage IRS again recently - for the US market. Though they did start selling it the UK again a year later.)

English beer fanatics rebelled against the lager encroachment in the early 70s. The Campaign for Real Ale was launched to promote traditional British brewing. The Great British Beer Festival, a yearly beer competition, was launched a few years later.  Today, "real" ale, meaning cask brewed ale, has a pretty solid fan base in the UK, and a decent selection of these beers are imported into the US.

Those of you who were around in the mid-90s might recall that British beers were considered pretty hip at the time. Drinking Bass or Newcastle* was a sign of sophistication. My wife actually liked some swill called Watney's Red Barrel.  Perhaps your town had, like mine, a British pub type establishment which served Fuller's, Courage and Worthington, along with fish and chips and shepherd's pie. Today, however, I''m going try a few smaller English beers, all of which fall into the "real ale" style.

Bluebird Bitter is probably the most well known beer from Coniston Brewing Company, a brewer founded in the mid '90s that specialized in ales for the CAMRA crowd. The bottle states that it is "Award Winning," and Coniston's site lists an impressive number of medals from various beer festivals. 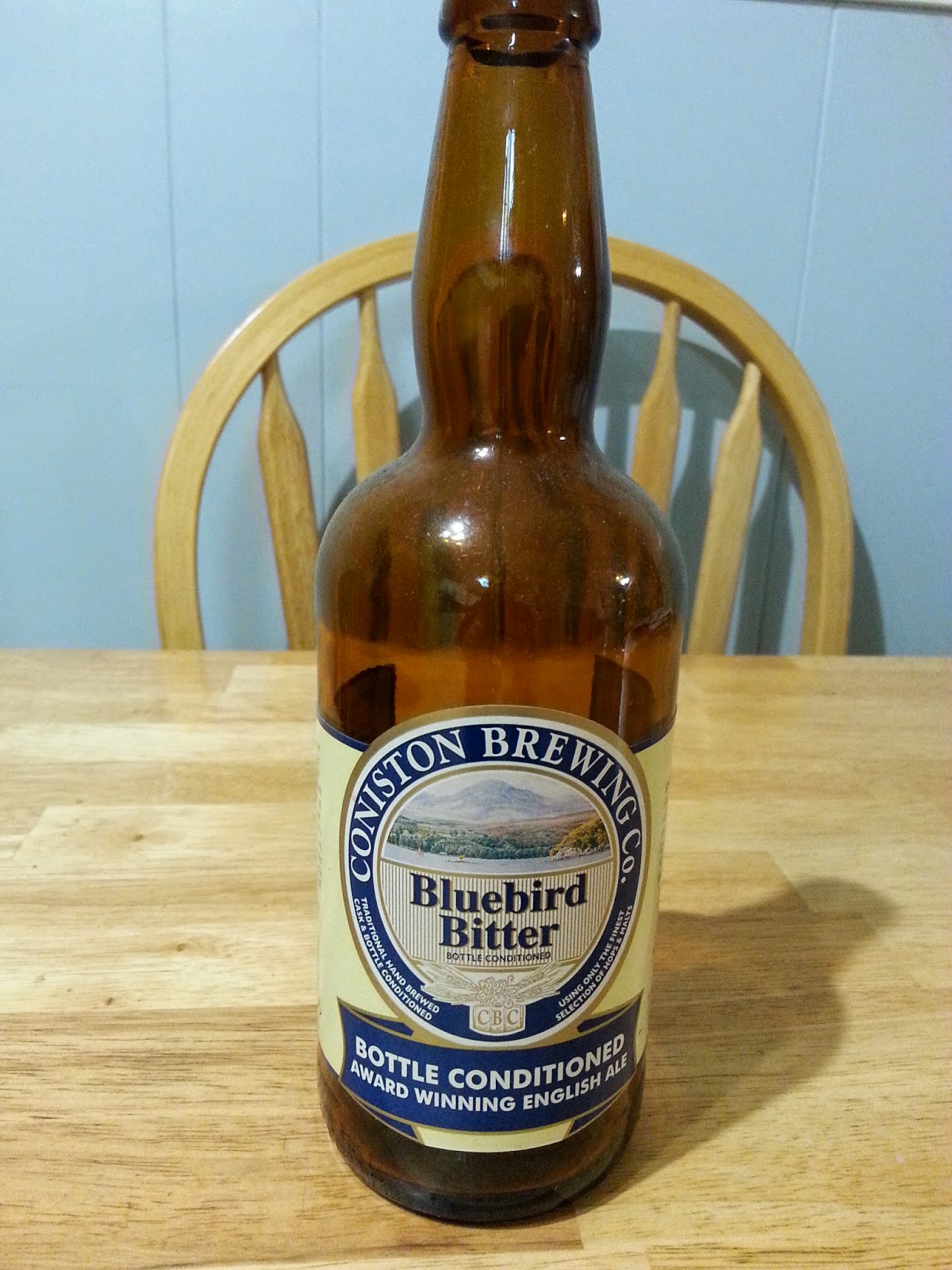 It pours a nice orange color with a thin head of foam that resolves into a slender ring with a bit of lacing. I got very little smell from it. Bluebird has a relatively light body with that sort of creamy feel that British brewers seem to value so much.

It definitely has that distinct, British flavor to it. It might be the Challenger hops. It's a very pleasant, unassuming beer. Sort of a earthy malt flavor with a wee bit of bitter hops and a slight metallic taste. Alcohol is pretty low, 4.2%, though Coniston's website claims a shockingly low 3.6%.  Mild flavor. It's not really a memorable beer, however. It seems like an average pale ale style beer to me. I'd rate it "good" but it almost seems....just a little too timid.

Next up is Adnams Broadside. Adnams is a Suffolk based brewer that's been around since the mid 1800s. Broadside seems to be their flagship ale, and has won "Best Bitter" awards at the Great British Beer Festival, and similar festivals. It's a dark golden color, with a bit more alcohol that Bluebird: 6.5%.  Again, it produces a head that quickly disappears.

Much like Bluebird, it's a very creamy, slightly sweet beer. As is typical of British beers, the malt is forward. Hops are pretty subtle. There's sort of a woody, nutty flavor. Just like the Bluebird it has this metallic aftertaste that seems characteristic of British beers.

Again: this beer is good tasting , but so polite, almost unassuming. It doesn't make you jump out of your chair and scream "damn! that is one fine tasting beer!"

Jeez, i guess the British like putting years on their beer bottles - Broadside sports a prominent "1672." Some major nostalgia for the glory days of the empire I'd wager. In the case of Fuller's, 1845 was the year the brewery was founded.

At 6.30 ABV it's a bit stronger than the typical English beer. 1845 is a bit darker than the other two ales, but has the same rapidly vanishing head, though the Fuller's starts out pretty thick and foamy at first.
Compared to Bluebird or Broadside, the Fuller's is bursting with flavor. Very prominent roasted malts and yeasts dominate. The hops are pretty slight, but one thing that stands out is the molasses flavor, with sort of a licorice aftertaste. There are hints of a old musty, woodsy taste. In my opinion, this beer is much more interesting than the two above. Fuller's seems a bit more aligned with the tastes of US beer drinkers. You often see it at British themed bars in this country, and a wide range of Fuller's brews are readily available in US stores. All the Fuller's beers I've had have been very tasty, with the Fullers Vintage being my favorite. The funny thing is that despite Fuller's being around for over 150 years, both Vintage Ale and 1845 were introduced in the 1990s.

My takeaway from this is that it's clear that beer geeks in the US and UK have pretty different tastes. Traditionally, European beers are very malt-orientated; in the US we tend to downplay the malty, bready flavors, and instead, hoppy beers are enormously popular.  The American beer scene is much less beholden to tradition, and bizarre beer experiments are the norm. Big, powerful, high-alcohol beers are prized in the US, while in the UK they tend to go for smoother, more subtle flavors. There are many, many fantastic beers from the UK, but many of the CAMRA-endorsed cask ales I've had were a little on the underwhelming side. 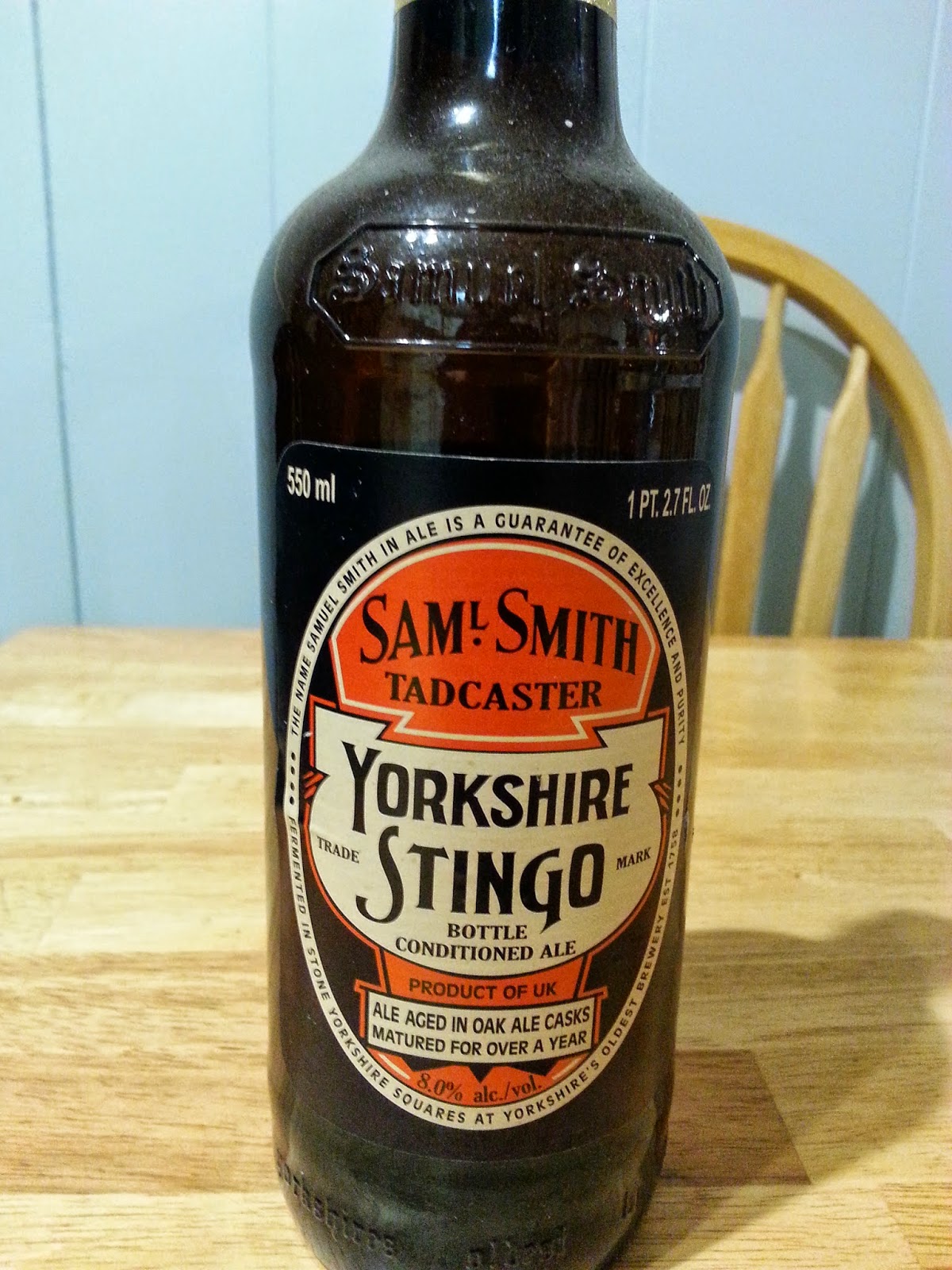 If you were to ask me what my favorite British brewer is, I'd say Yorkshire's Samuel Smith Brewery, without hesitation. Smith's greatest accomplishment must be the mighty, mighty Yorkshire Stingo. A "strong ale" at 9.0% ABV, Stingo is huge, bursting with flavors: malty, fruity, sugary, oakey. Pretty much everything you could want in a British beer. It's brewed only once a year, and is a bit pricier that other Samuel Smith ales, but it's clearly worth it. Smith's stuff is readily available in the US, and I see it even in places like Trader Joe's and Whole Foods. If you've never tried the Oatmeal Stout, Imperial Stout and Taddy Porter, get these beers NOW. They are a steal.

I'd rate these beers as:
Bluebird Bitter: B
Adnams Broadside: B
Fuller's 1845: B+
Yorkshire Stingo: A-


*No longer brewed in Newcastle, and now owned by Heineken.