We Have Entered the Age of the 16 Bits!

...or maybe we're still in the age of the 8 bits. It depends on who you're asking. Either way, the first amazing episode of Chronturbo has arrived, and may be downloaded or streamed at Archive.org! This new project, announced so long ago, sees us add a third console to the series. The PC Engine, known in the US as the TurboGrafx 16, is the first "fourth generation" video console: released in October of 1987 by electronics/technology giant NEC, with most early titles published by Hudson.

The PC Engine was quite successful in Japan. Most sources say NEC's console outsold the Famicom for the first year after its release. Some sources go further and say it outsold the Famicom for the rest of the Famicom's lifespan. That's quite impressive, but it must be remembered that the Famicom had already reached an unthinkable level of market saturation by 1987. Nintendo's console was four years old when the PC Engine hit the shelves and so enormously successful that anyone interested in video games probably already had one by that point. 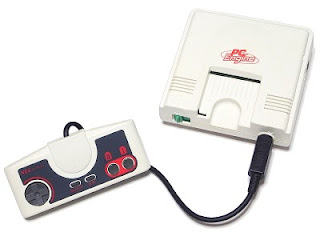 In the US, the system did not do as well, to put it in polite terms. With the release of the Sega Genesis, the TurboGrafx found itself in a distant third place in the console wars. Still, the console was highly regarded by hardcore gamers, and earned itself a loyal cult following. Today, the hardware is highly prized among collectors, and working TurboGrafx 16 and TurboDuo consoles are far more expensive than Nintendo or Sega machines.

The one sticky point about the PC Engine is whether or not it should be classified as a 16 bit console. NEC certainly thought so, as the name TurboGrafx 16 implies. On the other hand, while the system does utilize dual 16 bit GPUs, the CPU itself is a just a souped-up version of Western's 8 bit 65C02 chip (which is itself a souped-up version of the old MOS 6502, found in the Atari 2600. The Famicom was also based on a MOS 6502 variant.) Of course, regardless of the CPU, the PC Engine was clearly leagues ahead of the Famicom in terms what it could put on the screen. A total of 482 colors could be displayed at once and sprites could be substantially larger. The PC Engine had considerably more RAM than the Famicom, and once the CD-Rom add-on was released, the amount of RAM was dramatically increased (The Arcade System card provided 2048 KB.) 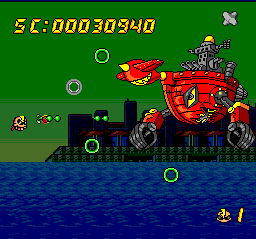 But, while such technical facts and figures are interesting to the geeky sorts of folks who play video games, ultimately what matters are the demonstrable results of all that hardware. And in that department the PC Engine definitely delivered. Perhaps the system's main technical weakness was its lack of multiple background layers, yet it somehow managed to fake it with the best of them. The extra space provided by the CD-ROM drive allowed for high quality cut scenes, voice acting and pre-recorded music. When all the stars were aligned just right, the PC Engine was capable of producing better looking games than the Genesis/Mega Drive: Lords of Thunder being the classic example. So if the PC Engine was not a "real" 16 bit console, at times it sure acted like one. 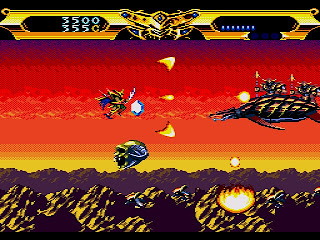 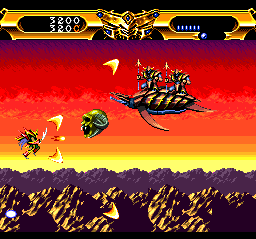 Chronturbo Episode One is a little short by Chrontendo standards; in order to get the first two episodes to neatly enclose 1987-1988, I decided to go with 13 games per episode at first. But what a selection of games! Platformers, shoot-em-ups, baseball games, RPGs, racing games, beat-em-ups, puzzle games - there's a little something for everyone. Naturally, one game outshines the rest, so we'll begin there: 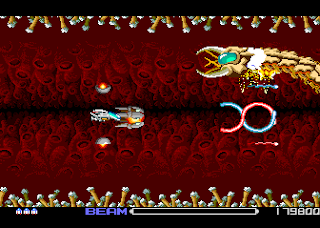 The first must-have game for the PC Engine, and the first to really show off the hardware's power. I've mentioned my love of R-Type before on this blog. It's a beautifully done game in every aspect: fantastic graphics and sound, innovative game play, and a wonderful sense of design. Its influence on the shoot-em-up genre was huge, but so was its importance to the PC Engine. Namely, that such a recent, cutting edge game could be reproduced, virtually perfectly, on a home console, must have impressed the heck out of gamers back in 1988. R-Type is, perhaps, the most faithful and accurate arcade port we've seen so far.

Some other fine games this episode:

This odd little platformer from Hudson doesn't deserve the bad reputation is sometimes has today. Based on a TV show starring comedians Cha Kato and Ken Shimura, Kato-chan is a sort of a follow up to Adventure Island, with healthy serving of scatological humor added in. Goofy, silly and gross, the subject matter tends to disguise the fact that this is a creative and well constructed hop and bop style side scrolling platform game. 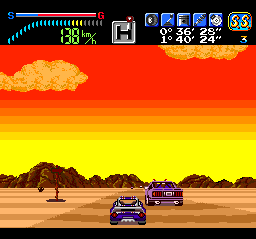 What a cool idea for a racing game! Victory Run has you driving the famous Paris-Dakar Rally (oddly, an unrelated Paris-Dakar Famicom game will be turning up soon.) While clearly an Out Run clone, Victory Run outshines Sega's Master System port of Out Run. A grittier, more realistic driving game than we're used to seeing, Victory Run throws in such novelties as auto parts that wear out and need to be replaced, and extremely rough desert roads. Along with Rad Racer, this is the best driving/racing game we've seen so far. 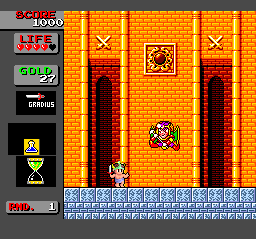 Along with Shanghai, Bikkuriman World was one of the PC Engine's launch titles. A bizarre sounding name, but it turns out to simply be a port of Sega's Wonder Boy in Monster Land with altered character sprites. Wait a second, you say! That's the same thing Hudson did when they based Adventure Island on Wonder Boy. Well, they did it again, this time using characters from a series of stickers packaged with a Japanese snack food. While nowhere near as impressive as R-Type, Hudson pulls off a pretty decent port of Monster Land.

Another arcade port and the best of the three Namco games this episode.

What about the bad games? Well, there's nothing too terrible on display here - the fact that all titles are from Hudson or Namco sees to that. But I'd say the worst of the bunch are these:


Based on the "Vol 1" found in the upper right hand corner of The Kung-Fu's box art, I'd say Hudson intended this to be the first game released for the new console. It ended hitting the shelves three weeks after launch. It almost seems more like a tech demo than a complete game. The Kung Fu is a rather simple beat-em-up featuring a Bruce Lee lookalike and a single enemy type. However, the real point of the game is to demonstrate the PC Engine's ability to produce enormous, detailed sprites. It succeeds in that department; it's too bad Hudson didn't invest a bit more time in creating an interesting game. 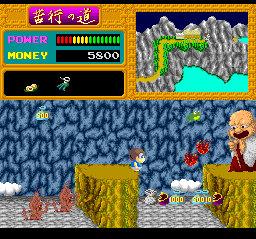 Another arcade port from Namco, this time of the game known in the West as Shadowland. A weird and unique supernatural themed platformer with some bits of exploration thrown in, Shadowland is given a less that stellar home version, courtesy of Tose.

The first mahjong game for the system. Mahjong games are like golf and baseball games, no Japanese console is complete without having one out as early as possible. 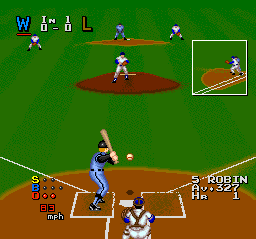 Speaking of which, this is the second baseball game for the PC Engine, this time from Hudson. The first in the reasonably long lived Power League series, and the only one released outside of Japan. 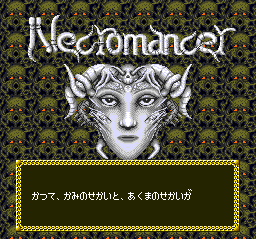 And since this is 1988, there's also got to be an RPG. This Hudson title is most notable for its impressive H.R. Giger box art and spooky opening music. Sadly, the enemy design found inside the game itself fails to be as interesting.

The first console version of Activision's puzzle game, originally for the Macintosh. We saw a Famicom release of this from Data East a while ago, but the PC Engine game actually came out first. It's not every day another console gets a game before the Famicom.

An early entry in an inexplicably popular genre: video games based on the board game, The Game of Life.

There you have it. I must admit I was quite impressed with the lineup of games. Compared to the Master System, we are off to a pretty strong start. So, go ahead and check it out.
Posted by Doctor Sparkle at 8:45 PM 17 comments:

Dr. Sparkle's been out sick

Hey kids, Dr. S has been lying low for the last ten days or so due to some unplanned cold and flu action. This has put a bit of a kink in my schedule for Chronturbo, but things should start moving again before too long.

So, in the meantime, I've updated the links a tad, adding the new retrogaming podcast, Pixel Dreams, as well as the well loved Retronauts blog from 1UP.

One thing I mused about while playing Metal Gear, is why, whenever your video game hero gets captured, does all his weapons and gear get conveniently stashed in a nearby storage room? If I were a video game villain, after capturing any heroes I found sneaking around my top secret base, I'd have all their weapons, health refills and pilfered key cards tossed in the incinerator. I would definitely NOT place everything unharmed in an unlocked room 20 yards from where I imprisoned aforementioned hero. This immediately stuck me a rule that should be in the Video Game Evil Overlord Top 100. If bad guys followed even 1/10th of these rules, you would never beat any video game. I've added Socks Make People Sexy to the links, in case anyone's not familiar this this awesome site.

Lastly, a word about Sunsoft. Last episode, I speculated over the surprisingly high production values in Ripple Island and noted the name Tokai Engineering in the credits - a name that also appears in some later good quality Sunsoft games. Unfortunately, actual details about what exactly Tokai Engineering was are pretty scarce. CRV pointed out an out 2Chan post stating that Tokai was merely some sort of shell company.

However, a bit more information about the old days of Sunsoft can be found the Game Maker Vol. 2 DVD, recently covered in Retronauts. The DVD contains an interview with Atsushi Sakai, former programmer at Sunsoft. Sakai discusses such gems as Atlantis no Nazo and Mitokoumen... but it appears that the first game at Sunsoft which Sakai was completely responsible for was Ripple Island! He also mentions Super Spy Hunter, Ufouria and Gimmick, in the interview, so I assume he was involved in the programming on those as well. Was Sakai Sunsoft's secret weapon? A transcript may be found here.