Hello everyone, Chrontendo Episode 12 is now available to download or stream over at archive.org. This episode sees us finally reach December of 1986 and the Japanese holiday season. As a result, we'll the number of games being released spike dramatically as publishers try to fill the shelves with product before New Year's Day. Not surprisingly, we see a few new publishers enter the fray this season. November and December see the Famicom debuts from the television and music company VAP, toy giant Takara, Japanese utility and cable provider Vic Tokai, and music/electronics behemoth CBS/Sony. We'll also be introduced to a few companies who actually specialize in video games, such as HAL Laboratory, the Square-led consortium DOG, Towachiki, Use, and Imagineer. Of these last five, only HAL would have a long and prestigious career.

As it turns out, this would be the last great influx of new publishers for the Famicom. Over the years Japanese publishers for the system would come and go, but never again in such great numbers. If we were to flash forward to November/December 1987, we would see releases from pretty much the same companies that released games in November/December 1986. By this time, the Famicom has entered its adult years.

As for the games themselves this episode? An odd selection, notable for two very good shooters (and one pretty decent shooter), a notorious example of kuso-ge, and a couple terrible games based on very popular licensed properties. Also, we have the second US-only release, this time courtesy of Data East. 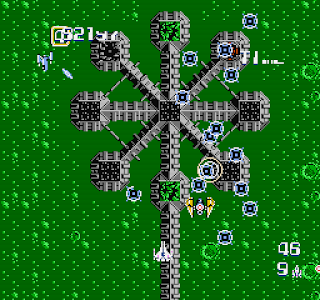 We've seen some fine shoot-em-ups for the Famicom so far, but Zanac leaves all competition in the dust. A vastly superior port of a title originally released for MSX computers, Zanac is an early title from Compile, who you might recall being the developer of Lunar Ball. Compile would eventually go on the become what many consider to be THE developer of shoot-em-ups for consoles, with such titles as Blazing Lazers, Guardian Legend, and the Aleste series. Zanac feels like the first modern shoot-em-up for the Famicom, with its frequent bosses, wide variety of secondary weapons and generous helping of power-ups. From a technical perspective, the game is an amazing accomplishment. Zanac manages to cram in tons of enemies and bullets without slowdown or excessive flickering.

Coincidentally, this episode also features Tiger-Heli, a port of Toaplan's first shoot-em-up. While the arcade Tiger-Heli was a fun, if not exceptional game, the Famicom port is severely hampered by terrible programming, courtesy of Micronics. While still a worthwhile game, playing the Famicom Tiger-Heli will make you wish it was ported by someone with Compile's technical competence.

Episode 12 is a little shooter-heavy, what with Zanac, Tiger-Heli, and this little gem from Konami. A console only sequel to the arcade game Twinbee, Moero Twinbee tweaks the formula slightly by adding horizonal scrolling levels as well as vertical. Still present is the unique and slightly irritating power-up techinque that requires you to shoot falling bells until they change color. Fortunatley, some of the best power-ups are found by bombing ground targets. Its a rare day that sees two high quality shooters on the Famicom in one episode, so enjoy it while you can. Next episode, things return to normal with the dire Gall Force. 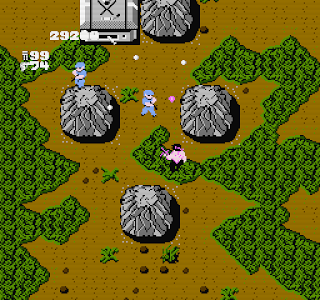 Ikari is one of the most divisive games released for the Famicom/NES. A select few revere it as a classic, while many others consider it to one of the worst games for the system. Much of the vitriol centers around the difficult to use controls - the arcade original used a rotary joystick while the Famicom port makes due with the D-pad. Still, some of the greatness of SNK's original game manages to shine through, despite another horrible porting job from Micronics. Speaking of which, Micronics has managed to become the arch-villain in the Famicom saga so far. They should receive criminal charges for the number of classic arcade games they have screwed up so far.

Sequel to ASCII's MSX game The Castle. This Lode Runner like puzzle game, released as Castlequest in the US, has you make your way through a 100 room castle in order to find a princess. Each room contains enemies, death traps and color-coded locked doors. The wonky jumping controls give Castle Excellent some hair pulling moments, but overall it remains a well designed, challenging game.

There are plenty of bad games for the Famicom, but few manage to reach the level of Ganso Saiyuuki. In the categories of boring gameplay, shallow combat, amateurish graphics, general incoherence, and simply lacking anything that even resembles fun, Ganso Saiyuuki takes the gold medals. Hell, this game takes the platinum medals. It's difficult to completely understand Ganso Saiyuuki without playing it yourself, so I can't really elaborate on how bad it is. However, someone picking this game up for the first time will probably be simply baffled, as it appears at first glance to be a game in which absolutely nothing happens. Imagine Dragon Quest with no enemy encounters (though these do eventually appear) and no NPCs and with an impossibly huge overworld. Needless to say, it has a cult following in Japan as being a prime example of kuso-ge. 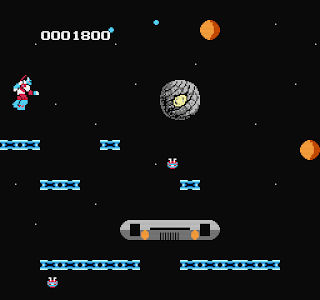 Another spectacular debacle of a video game, this quickie cash-in from ISCO and Takara fails on almost every level. Really, a basic run to the right and shoot things game shouldn't be that hard to make, yet Convoy no Nazo manages to flub even the simplest gameplay elements. For example, most enemies are too short to actually be hit be your laser - it simply sails over their heads - thus forcing you to jump over most things that come your way. Even the most desperate Transformers fan should avoid this mess.

Notable for being the first of many, many Dragon Ball and Dragon Ball Z video games. Unfortunately, this Tose/Bandai title, released in censored form in the US as Dragon Power, gets the series off on the wrong foot. Shenron no Nazo misses even the low standards set by earlier Bandai games like Chubby Cherub and Ninja Kid.

Mappy Land - Decent but flawed console only sequel to Namco's arcade game concerning a rodent law enforcement officer.
Nagagutsu o Haita Neko - Based on Toei's 1976 animated film. Not to be confused with the related, but very different US only game, Puss 'N' Boots: Pero's Great Adventure.
The Monitor Puzzle - Kineco - Kinetic Connection - Difficult puzzle game involving putting together pieces of a moving image.
Aigina no Yogen: From the Legend of Balubalouk - Awkwardly titled adventure/platformer game. Seems to involve a kidnapped princess of some sort. The Famicom debut from Vic Tokai.
Hottaman no Chisoko Tanken - Sort of like Dig Dug, only more complicated. Famicom debut from Use.
Daiva - Part of an ambitious project of seven interrelated Daiva games, each released on a different Japanese system. The game itself combines Star Raiders with mediocre platformer action.
Karate Champ - The odd man out this episode. This Data East title was the second US-only release (after Nintendo's Gumshoe). Well, this technically isn't true - Karate Champ was given a belated release on the FDS in 1988. The 1984 arcade game was one of the first one-on-one fighting games and was probably still popular enough in 1986 for Data East to feel it warranted an NES releases.

As always, this episode may be downloaded from archive.org.
Posted by Doctor Sparkle at 4:52 PM 5 comments:

Well, it is running a wee bit behind schedule, but Chrontendo Episode 11 is finished and available for download. What's in store this episode? A pretty nice selection of games, actually. I've said it before, and I'll say it again, but of all the third party publishers, Konami and Hudson are the ones really putting some effort into their games. By Fall 1986, both publishers had mastered the art of original games for the Famicom, in ways that others, such as Jaleco, Sunsoft, Square, and even Namco and Taito, have not.

This episode also sees the first great game for the Famicom Disk System that was not released by Nintendo themselves. The system is slowly coming of age, with six FDS games being released this episode. By end of the year, new FDS games will be coming out one after the other. 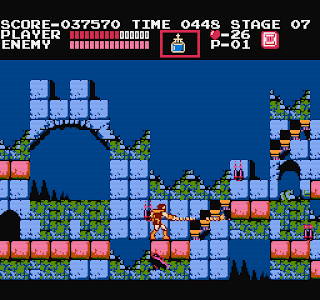 Classic platformers don't get much cooler than the orginal Castlevania. Light years ahead of most other recent Famicom platformers, this Konami release combines rich graphics, atmospheric music and imaginative level design. Castlevania eschews the typical cutsey style of most post-Mario side-scrolling platform games, instead opting for a spooky, gothic horror themed game set inside a decaying, monster infested castle. Your character, Simon Belmont, makes his way through six levels, each quite different in design and with a unique boss at the end of each. The bosses are one of the most impressive elements of the game. At a time when repeated or virtually identical bosses where commonplace, each of Castlevania's bosses are completely different in appearance, attack pattern, and weakness. While some might fault the game's controls as being unforgiving, they are still massively superior to the sloppy controls found in such games as Atlantis no Nazo or Gegege no Kitaro. 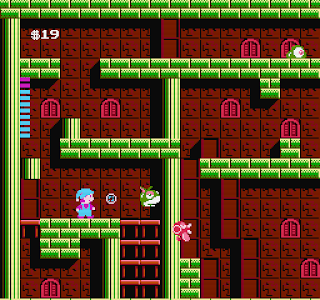 Admittedly, this Hudson release is not in the same league as Castlevania. Milon's Secret Castle is a carefully designed, cute and fun puzzlish platformer built around a musical theme. Strangely similar to Castlevania, the object of the game is to ascend floor by floor, room by room, to the top of the titular castle. Each room can only be exited by finding a sufficient quantity of hidden items. While not without flaws, Milon's Secret Castle is a quality title.

Capcom finally ditches Micronics and ports their 1985 arcade hit themselves. The results are not quite as impressive as you might hope, but you still end up with a pretty good vertical action game. Furthermore, Commando inaugurates the Capcom tradition of adding additional gameplay elements to console ports.

After two previous attempts someone finally releases a decent wrestling game for the Famicom. Unsurprisingly, that someone turns out to be Nintendo themselves.

Not really a good game, but notable for debuting Bandai's Family Trainer series. These games were designed to be used with the Family Trainer mat, on which the player stood and controlled by moving around. Nintendo was apparently quite pleased with the idea, since they released it themselves in the US as the Power Pad. Curiously, Nintendo is now reviving the idea as the Wii Fit. 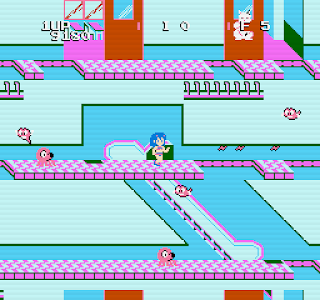 Based on a popular manga/anime series, this Jaleco title was released in arcades as Momoko 120%. Not a fantastically horrible game, Urusei Yatsura is just a little on the annoying side. The fact that it's ending up in Episode 11's "bad game list" just shows the relatively high quality of the games this time around.

It's probably a little unfair to throw this quickie educational release from Tokyo Shoseki on the list, but it's actually less intereting than the previous three Sansuu games. They've even cut the number of games on each cartridge in half!

Terra Cresta: Pretty decent port of this classic vertical shoot-em-up from Nichibutsu.
Buggy Popper: Port of the old arcade game known as Bump 'n' Jump in the US.
Othello: An Othello video game from the mysterious publisher Kawada.
Dead Zone: Weird text adventure game from Sunsoft. Has the distinction of being the second
Japanese text adventure game for the Famicom.
Super Star Force: Kemco's lame sequel to Star Force. Not nearly as good as Hudson's sequel to that same game.
Ginga Denshou - Galaxy Odyessy: Time traveling vertical shoot-em-up. Not as interesting as
it sounds.
Mississippi Satsujin Jiken: Port of Commodore 64 adventure game Murder on the Mississippi.
I am a Teacher - Teami no Kiso: The second knitting instruction game from Royal Kougyou.

Well there you have it! Go ahead and download or stream Episode 11 here.
Posted by Doctor Sparkle at 12:00 AM 4 comments: