THIS IS DR. SPARKLE SPEAKING

Dr. Sparkle does not apologize for his actions.  He has neither the inclination, nor the time for apologies. He is busy shattering pillars of mighty marble with his enormous, mighty hands. He is too preoccupied uprooting forests, and shattering the trunks into a thousand pieces. He takes these slabs of rock, these massive oaks, and like Prometheus creating fire, transforms them into mighty, mighty videos, to be posted onto Youtube. He would go into more detail about how he does this, but you would not be able comprehend the Herculean efforts required of him. While posting this comment, the wind blows gently through Dr. Sparkle's magnificent head of hair, which is neither the color of apricots nor of strawberries, but of a seriously overripe banana.

Needless to say, I expected Chrontendo 45 to be out by now. But I've been really busy. This weekend, when I hoped to finish the new episode, and instead ended up helping my mother paint her spare bedroom. My mother's been sick - first cancer, then a splenectomy, so you can't blame me. Also, she recently got a dog: a weird little Japanese dog. I'll post a picture some day. Normally, I'd take full responsibility for the tardiness.  Instead, to be more consistent with the tenor of the times, I'll simply blame President Obama. He simply hasn't created an environment which makes me comfortable creating videos about videogames. Perhaps if he would lower the taxes of the video creators, I'd be less hestitant.

One other thing I'll blame the President for: the scarcity of good DS games in my area. Upon the advice of this site's readers, I've been on the lookout for some interesting DS titles. But eventually I remembered why I have so few DS game to begin with: ALL I EVER SEE ON THE SHELVES IS CRAP! I have several stores in the my area that carry a good selection of games, both vintage and recent. There's no problem finding cheap copies of Mass Effect 2 or overpriced copies of Valkyrie Profile. I could turn up SNES carts for Chrono Trigger of Axelay with no problem. But when it comes to the DS: it's endless copies of Minute to Win It, Ben 10, and The Biggest Loser! I guess people always hang on the the "good stuff" when it comes the DS, and the crap ends up being traded in. Well, I suppose this is what the internet is for.

Anyway -- Chrontendo 45, its been recorded and everything, and just needs to be edited.
Posted by Doctor Sparkle at 9:57 PM 15 comments:

I know what you're thinking. "Beertendo? That's not the reason we check this blog! We want more videos about Goddamned videogames!"

This is undoubtedly true. However, Chrontendo 45 is not ready yet, but it should be at the editing stagne within the next few day.  What can I say? I've been busy and distracted. I've even been playing a non-Chrontendo related videogame: Radiant Historia. It's a pretty darned good RPG from Atlus that might remind you a little of Yasumi Matsuno's tactical RPGs, or, due to the time traveling theme, Chrono Trigger.  Now that the DS is a "retro" system, I'm suddenly more interested in it, and am trying to pick up games before they start becoming harder to find.

Perhaps Chrontendo readers can make some suggestions?  I'm aware of the many good RPGs and adventure games for the DS, but what are some good action games? I know of the Castlevania DS titles, and Contra 4 and Bangai-O Spirits, but what other good stuff is out there?

On to the next beer in the Russian River "religious" series of Belgian inspired beers! In the first entry, we covered RR's Santification, a sour blonde, which I liked quite a bit. Today, we have Damnation. Beer fanatics, might think, "Damnation? It sounds like a Golden Ale." And you would be correct. Golden Ales, or Blonde Ales are, in the words of Jeremy Marshall, "fermented out for a crisp and dry finish with a detectable malty sweetness that is like bread or toast rather than caramel." Golden Ale is a somewhat vague term, and to further confuse matters, some sources call this style of beer a Belgian Pale Ale, even though it tastes nothing like a British or American Pale Ale. Beer Advocate calls Damnation a "Belgian Strong Pale Ale," which is appropriate since the alcohol level is pretty high, 7.75%. 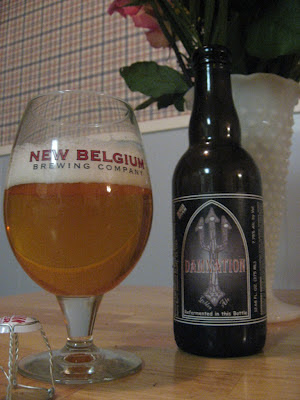 Compared to Sanctification, Damnation is a lighter, straw color with a thick head of foam that sticks to the sides of the glass once it recedes. The flavor is yeasty, with very little bitterness. It's not nearly as fruity as the Sanctification; the main fruit flavor is banana, and there is a bit of spice - maybe cloves? There is also an odd, almost vegetable flavor in the background. It's tough to describe. Damnation has a very faint sweet fruit aftertaste; maybe a bit of lemon?

Russian River describes this as "inspired by Duvel" but I like Duvel better. In fact Duvel is usually the considered to be the definitive example of the Belgian Golden Ale.  I think I would take most of the big Belgian Golden Ales, like Duvel or Delerium Tremens, over Damnation. Even North Coast's Pranqster is really good, and has the added bonus of being easy to find and cheap compared to Damnation. My local grocery store normally has 4-packs of Pranqster on the shelf.

To add a bit of scientific rigor to the proceedings, shortly after trying Damnation, I went out and got a bottle of Duvel, for comparison (readily available at any local Trader Joe's.)
Duvel is, again, pretty light in color, with a huge head of foam that sticks to sides. Duvel goes down extremely easy, with a big malty and yeasty flavor. But at the same time, it's very dry and crisp. It tastes "cleaner" than Damnation and just has a really beautiful flavor, perhaps with a hint of banana.