I hope everyone out there has a happy Thanksgiving. Chrontendo 26 will surface before too much longer, I hope. To everyone in those non-Thanksgiving celebrating countries: have a nice November 26 from me and my dog. 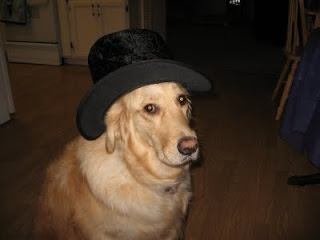 Square Rises to the Top

First up, a few quick updates. Substantial progress has been made on Episode 26. If next week were a normal week, I'd say it would be up in a few days. But with both my birthday and Thanksgiving coming up, finding time is going to be tough. But I hope to have that episode ready very soon.

But back to Episode 26. Aside from Mega Man (and Karnov!), Episode 26's main attraction is Final Fantasy, a game which I assume many of you have heard of. Heck, I'd say that along with Legend of Zelda and Super Mario Bros, FF is about the biggest game we've covered so far (though FF's fame was, of course, achieved retroactively.) Maybe I'm not the right guy to be discussing Final Fantasy in depth. True confession time: I've never finished FF VII. I guess that automatically disqualifies me from being an expert on these games. 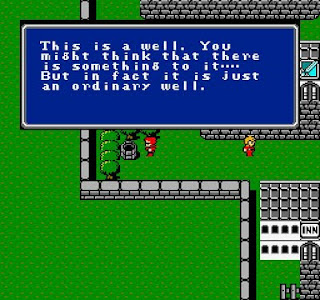 However, I do love the 2D Final Fantasy games, and when playing the first one again for Chrontendo, I found myself enjoying it quite a bit in spots. One thing I had forgotten - the game is tough. Even more so than Dragon Quest II, FF loves to throw horrible status effects at you. Having three or four party members get poisoned is not that uncommon. And almost anything can poison you in this game: spiders, snakes, mucks, wolves and even... lobsters. Really now? Lobsters?! And of course, there's blindness, paralysis, silence and worst of all, being turned to stone. I suppose "death" could also count as a common status ailment. Keep in mind that Phoenix Downs have not yet been introduced, and while your White Wizard can eventually learn a revival spell, it cannot be used in battle. 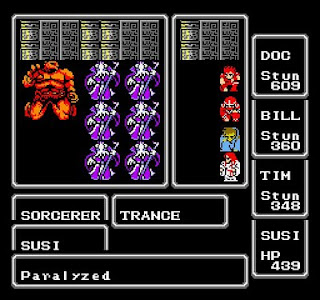 Dungeons and caves are little more than enormous deathtraps, baited with special armor and weapons, treasure chests of gold and quest items. A common scenario is getting to the second floor of a dungeon, having a series run-ins with unusually tough monsters, using all your healing magic in an attempt to get your party's hit points back up to a reasonable level, then realizing you better head back up to the surface, rest, and then start again. Or alternately, a party member or two gets turned to stone or killed, leaving you to fight your way back out of the dungeon and into town. This element of danger lends a real tension to the game; you're only one "monsters strike first" away from total disaster at any given time. 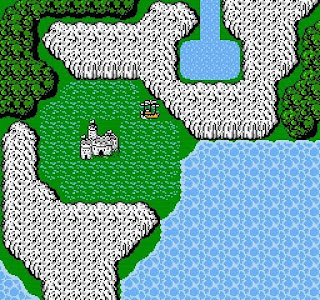 There's much more to Final Fantasy than just its punitive difficulty. Every element from Dragon Quest is here, in enhanced and expanded form. Like magic spells? FF has tons of them, 64 to be exact. For weapons, we've got daggers, hammers, swords, nunchucks, staffs, Excalibur, Musamune - about 40 implements of destruction. In the defensive department we'll find armor, shields, gauntlets, helmets, rings, capes, and the ever popular ribbon. The world is populated not just with the standard kings and villagers, but also with dwarfs, elves, pirates, friendly dragons, confused robots, a cranky witch and talking broomsticks. The turn based combat is made substantially complex and involving. Character customization is added, giving Final Fantasy sort of a de facto difficulty slider. DQ's solitary ship is replaced with a ship, canoe and an airship. There is an in game map! And Nobuo Uematsu's score is freakin' fantastic. 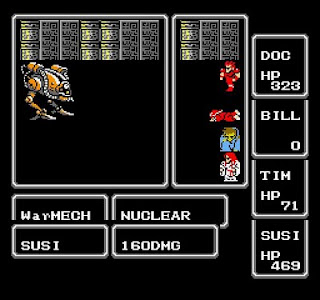 Granted there are a few things that modern RPG fans will not cotton to. For example, if the monster targeted by a party member is killed before that party member moves, another monster will not be targeted. The party member will simply swing at the empty air, essentially losing a turn. Yes, it sucks when that happens, but that just means you need to chose your targets carefully. Despite such issues, in the context of 1987, Final Fantasy feels like a breath of fresh air. By rethinking or simply refining so many elements of the post Dragon Quest JRPG, Square manages to leap to the head of pack.

Final Fantasy's success apparently altered Square's business model entirely. 1988 will see them kill off DOG completely and greatly slow down the frequency of their releases. A few freestanding games will come out over the next few years, but Square will devote itself almost entirely to FF for the rest of the Famicom's lifespan.

One of these days, I'll get around to finishing Final Fantasy VII. Presumably Cloud will finally catch up to what's-his-name with the white hair?
Posted by Doctor Sparkle at 2:12 PM 10 comments:

Karnov: The Wrath of God

Poor Karnov. In our modern, cynical age, the fellow is widely mocked on this thing we call the internet. This is somewhat understandable. After all, Karnov isn't your typical video game protagonist. He's not sullen, introspective, amnesiac young man fated to save the world; nor a 16 year old girl who just happens to be the best mech pilot in the universe; nor is he a woodland animal with a surplus of attitude and a reserve of infectiously clever catchphrases. No, he's the least marketable sort of video game character: a "fat"*, bald, mustachioed fellow of Russian/Slavic/Asian persuasion. 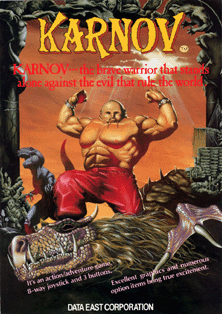 Some of the blame should rest with Data East and their localization of the game for the US. The Karnov manual informs us he's a circus strong man! In search of treasure! Specifically, the "Treasure of Babylon!" The game itself provides not the slightest hint of any sort of narrative. After the title screen, Karnov beams down on a bolt of lightning and then the fireballs go a-flyin'. After defeating the final boss, well... if there really is such a thing as the "Treasure of Babylon," we never get to see it. (For the record, Karnov never offers any explanation as to what exactly the Treasure of Babylon is supposed to be. Maybe its the same treasure Nicolas Cage found in that movie?) 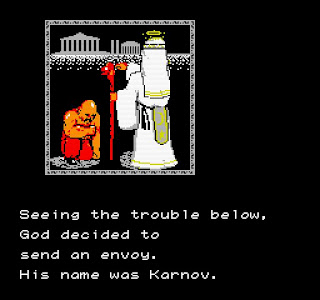 Karnov's plot is just the sort of typical, goofy, setup found in many 80's games. Thus, I was a little surprised when I played the Japanese version of Karnov for Chrontendo 26. It turns out Karnov isn't just some cirus freak traipsing around Asia shooting fireballs everywhere. No, it's revealed that he has been personally sent down to Earth by God himself in order to rid the world of a plague of demons. Karnov is apparently some sort of deceased fellow who's been called into God's service in penance for the bad deeds done in his lifetime. In between levels God zaps Karnov back up to heaven, and gives him helpful tips and little motivational speeches. 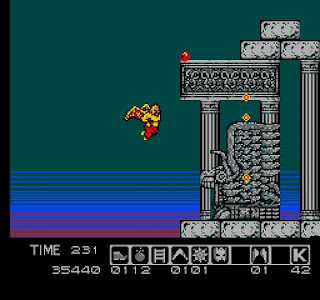 Data East's track record for the Famicom has not been exactly been phenomenal up to this point. Yet Karnov is a solid post-Ghosts 'n' Goblins platformer. Each level is given a distinct setting, and is crammed with power ups** and hidden items. The later levels have multiple paths to the end point, mostly of the "high road or low road" variety. There's nothing too out of the ordinary in Karnov: a bit a basic jumping, climbing ladders, falling down vertical shafts, etc. Karnov swims through one level and acquires wings and takes flight in another. While there's nothing groundbreaking in the game, one only has to compare it to similar games of the era, such as Data East's Kid Niki, to see the amount of craft put into Karnov. 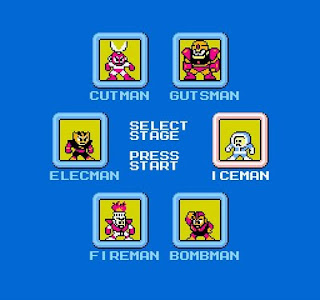 Karnov is often called a difficult game. And while its not exactly easy, those seeking a real challenge need look no further than a cart released one day before Karnov in Japan. I'm talking about Mega Man. Capcom's game takes the standard Famicom run and jump formula and changes all the rules. Rather than a typical linear run through a series of levels, Mega Man lets you play the first six levels in the order of your choosing. The experience may change significantly depending on the order in which you tackle the levels. Defeating a boss will net you a new special weapon; certain weapons are very effective against specific bosses. Additionally, having a specific weapon or item, such as the magnetic beam, can make difficult segments easier. Finding the most efficient path through the game is left up to the player. 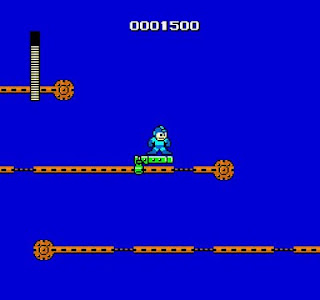 As for the game play mechanics, Mega Man is perhaps the first instance of what I would call "advanced platforming" for the Famicom. Games prior to MM certainly had moments that required some precision jumping, and moving platforms could be found in such titles as Super Mario Bros. and Adventure Island. But Mega Man went far beyond those games by adding a number of new and surprising elements: randomly moving platforms, disappearing and reappearing platforms, blind jumps from one screen to the next, creating your own platforms with the magnetic beam, and so on. Perhaps the pièce de résistance is the Yellow Devil, an insidiously difficult boss that disassembles itself and then hurtles each piece across the room, forcing you to memorize a series of precisely timed jumps over the pieces. Extremely controlled and careful jumping is not a luxury in Mega Man, it's a necessity for survival. 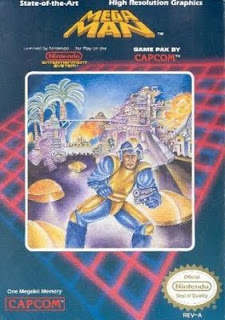 None of this would have been possible had Capcom not created a game with the most finely tuned controls we've seen for the system. It's clear than considerable time, love, and effort went into Mega Man, but it seems to have made only a slight blip upon release. Capcom clearly hoped it would do well it the US and gave the game almost simultaneous releases for the Famicom and NES. Perhaps the hysterically awful box art - maybe the most infamous video game cover ever - helped kill interest. Mega Man went almost entirely unnoticed in Nintendo Fun Club News; one ad in the Winter 1987 issue was all I could find. It wasn't until the extremely successful Mega Man 2 that the blue bomber found his way into the hearts of gamers.

Both Karnov and Mega Man will be contained within the forthcoming Chrontendo 26, perhaps the most massive, monstrous episode yet.

*Everyone says he's fat. But check out the guns on that guy. He's solid muscle. He just has a lot of stomach muscle.

** Best "power up" ever? The Ladder. Just imagine if Simon Belmont had one of those on hand. Or the guy from Kung Fu.
Posted by Doctor Sparkle at 6:13 PM 6 comments: