Yes, Yes, y'all! The latest episode of Chrontendo is now available to download at archive.org! Aside from being right on schedule, episode 7 covers the debut of the Famicom Disk System, as well the introduction of one of Nintendo's biggest franchises.

For those not familiar with the FDS, it was a Japan only add-on to the Famicom that plugged into the cartridge slot. It allowed you to play games on Nintendo's proprietary 3" disks. These disks offered more space that cartridges at that time, allowing for larger games. Furthermore, data could be written onto the disks, allowing for game progress to be saved -- very helpful for long games such as Zelda. FDS disks were also much cheaper to manufacture and were sold at a lower retail price. Nintendo released their own titles almost exclusively on the disk format over the next few years in Japan, as the system was quite popular over there. Rather strange, considering how they obstinately struck to cartridges through the 90s.

Our most valuable game this episode:

Zelda no Densetsu: The Hyrule Fantasy 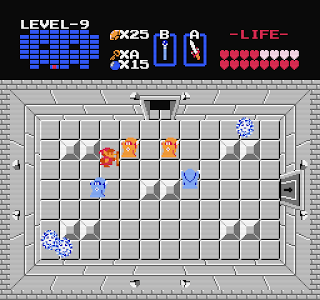 The debut game for the FDS was none other than Legend of Zelda. This game probably needs no introduction as it became one of the biggest selling titles on the Famicom and NES, and revolutionized console gaming just as profoundly as Super Mario Bros. In this episode, I examine the roots of Zelda and discuss the innovations this game made. Needless to say, in the next few months of 1986, concepts from Zelda will start appearing in other games. These include non-linearity; the overworld/dungeon division of the in-game world; shops in which power-ups and other helpful items may be purchased; NPCs who give you cryptic "hints"; and a structure of gameplay in which apparently unsurmountable obstacles may be overcome by finding certain items or performing certain actions.

Bomberman - The first game in Hudson's long running series. Actually a port of an MSX game, the Famicom release of Bomberman added the now-familiar robot design of the title character, as well as a lot of special abilities not found in the MSX original. While not as fantastic as the later games in the series, Bomberman is a good start. 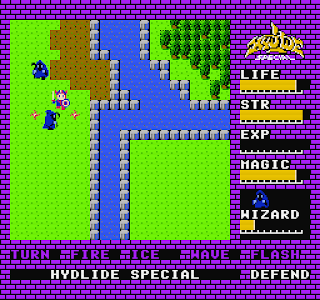 Hydlide Special -- The first Japanese RPG, a port of a 1985 MSX game. While some folks refer to Black Onyx as the first Japanese RPG, that game was designed by an American, and was intended to closely mimic the style of such games as Wizardry. Hydlide took Ultima 3, simplified the gameplay, improved the graphics, removed many of the RPG-ish elements, such as character classes and most of the stats, and made all the characters looks short and stubby. Hydlide is virtually unplayalbe by today's standards, and was eclipsed by the superior and enormously popular Dragon Quest, but it was the first of its kind.

Goonies -- Great platformer of the "run, jump and climb ladders" variety, published by Konami. This game was never released in the US, and is not nearly as well known as its sequel. Still, it is one of the best games of its kind to come out on the Famicom so far.

Twin Bee -- Very decent port of Konami's classic cute-em-up. While later games in the series were more entertaining, Twin Bee is one of the first shooters released for the Famicom that did not suck.

MagMax -- Another decent shoot-em-up, similar to Terra Cresta in its system for collecting parts to improve your ship.

The Hall of Shame:

Baltron -- An utterly pointless Defender clone. The first game from Toei Animation, and a portent of future horrible games from animation, toy and music companies.

Son Son -- Not a bad arcade game, but a terrible conversion, courtesy of Micronics. The amount of flicker in this game is truly seizure inducing. 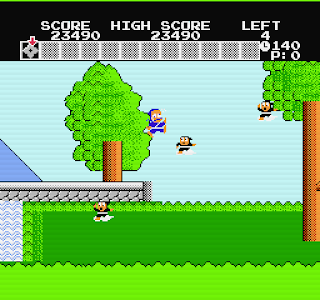 Ninja Hatori Kun -- While this game is not a disaster along the lines of Dough Boy or Kinnikuman, it is a hastily designed anime tie-in from Hudson Soft. It's a shame to see Hudson release such mediocre product as this.

Chrontendo Episode 7 may be downloaded or streamed here.
Posted by Doctor Sparkle at 9:07 AM

BINARY LAND:
Being reminded of playing a "Famiclone" version of this game where the penguins were replaced with Doramon and Dorami

SON SON:
Never did care for how slow the speed and flickering gets when multiple enemies are on the screen in this game. The arcade original though can be played on the PSP title "Capcom Classics Collection: Reloaded".

GOONIES:
Sad it never got brought over (unlike the sequel that did), perhaps Konami couldn't fit it in with the number of games they could release a certain year.

BALTON:
Interesting to see Toei released this one (they would have a few that got released in the US you'll probably talk about in later editions). Of course they also produced One Piece and many other classic shows most would gush about, but I still know them best or the classic movies of the 60's and 70's like "Puss 'n Boots".

I'm not sure if you are aware of this or if you covered it later, but Ninja Hatori Kun is listed as one of the games in this episode and you didn't actually cover it. I'm loving this series so far though!

Yeah, did you record Ninja Hattori Kun and just forget to edit it into the episode? We need a complete episode!!

Hey, when you re-edit Episode 7 to include the missing game, you may also want to shuffle a few other bits around. Right before Gyrodine, in your narration, you state that "the last three games" you'll be covering are all shooters. However, Gyrodine is then followed by Hydlide.

Any news on Ninja Hattori-kun?

I discovered these series a month ago. As a 90s boy and retrogamer I really like the effort placed into this project. I just have one additional observation besides the known fact that ninka hattori-kun is not included in the video. The episode guide excluded this game as well. Would be awesome to have that amended.

I thought Hydlide was unplayable back in the 80's. I'm surprised to see it written of even as fondly as you have.