Surprisingly enough, Chrontendo Episode 14 is only somewhat behind schedule and available to stream or download at archive.org! An historic episode, this, featuring not one but two big releases from Nintendo themselves, and.... we finally move into the year 1987! I'll undoubtedly come with with some sort of 1986 debriefing/1987 introduction, but that will need to wait for next episode. Episode 14 is simply packed with too much 8-bit goodness/weirdness to fit in any more content. You even get a bonus game! There are 16 instead of 15 this time.

This episode has a pretty densely packed release schedule - 12 games released between 12/19 and 12/26. Publishers were clearly trying to get some product on the shelves before the year's end, regardless of the quality. Thus we have two titles from Kemco on 12/26; one was an odd little text adventure game based on an animated feature film and the other a port of an ultra-obscure platformer originally released for the Atari computer systems. Taito and Nichibutsu both release arcade ports that come with special controls. Capcom ports one of their most recent arcade games while Bandai quickly puts another Family Trainer game on the market. And future Nintendo rival Sony releases their first game for the system, which is naturally based on a Japanese rock band. The first month of 1987 starts off slowly by comparison, but does contain one huge release.

But...there is more big news! Chrontendo has so far been focusing strictly on releases for the Famicom and ignoring all other gaming systems. This is changing as of right now because we will now be covering the Sega Master System/Mark III! That's right, the next episode will actually be Chronsega Episode 1!! We'll begin in October 1985 and continue on through the first half of 1986. Chronsega Ep. 1 will be followed by Chrontendo Ep. 15, and then by Chronsega Ep. 2. At this point, we'll be "caught up" and episodes of Chronsega will appear occasionally. The Master System is virtually a lost system in the US, having sold a fraction of the number of units that the NES did. Since Sega has a pretty good reputation with its later consoles, I'm hoping to find some forgotten gems on the Master System.

Back to business! This episode's gold medal goes to: 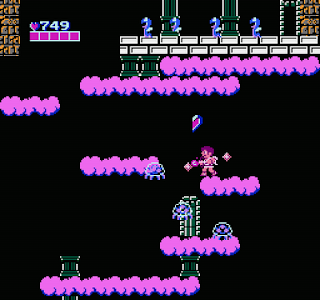 Produced by Gunpei Yokoi, Hikari Shinwa (literally "Myth of Light - The Mirror of Palutena") is sort of a follow up to Metroid. However, while Metroid focused on exploration and item gathering in a large, non-linear setting, this game is more action based and straightforward. Most levels are completely linear, though usually vertically orientated. In between each "world" is a maze-like fortress level, which are structured like side-view versions of Zelda's dungeons. Hikari is definitely not the classic that Metroid was, but still manages to be a solid, fun and occasionally very difficult platformer. One major issue is the curiously inverted difficulty level. Your character Pit starts off very weak, with almost no attack power and a short life bar. As Pit obtains new weapons throughout the game he gradually changes into an unstoppable killing machine. The final level is a cakewalk compared to the first. Regardless, Hikari Shinwa still stands heads above the other games this episode.

Other titles of note:

While having absolutely nothing to do with the Derek and the Dominos song, Layla still manages to be a slightly better than average run-and-gun game. It features a Samus Aran like space chick who blows through various asteroid/space station levels, killing everything in sight and picking up ice cream cones and pieces of cake for bonus points. Not to mention weapons and ammo. TONS of weapons and ammo. Layla must be the most well-armed character in video game history, able to carry around blasters, lasers, flamethrowers, bombs, rocket launchers, light sabers, axes, and so on. At a time when Castlevania's two weapon system was still fresh and new, the ability to switch between a dozen or so weapons seems way ahead of its time. If only the gameplay itself was a little more exciting....

Taito ports their often-copied arcade hit to the Famicom, complete with a special rotary controller. Unfortunately, Konami had just released a very cool Arkanoid copycat called Nazo no Kabe (covered in Chrontendo Episode 13). Arkanoid's main strength/weakness is the special controller. Having the controller allows you to more replicate the arcade experience, while not having the controller renders the game virtually unplayable.

OK, OK! So Seikima II is not a good game! It is still the wackiest game this episode, and thus earns an honorable mention. The Famicom debut from Sony (but not first video game from Sony - they had been releasing games for Japanese computer systems such as the MSX for a little while), Seikima II is based on a black leather, spikes and make-up encrusted Japanese rock band that was popular in the 80s. Incidentally, this game is not a sequel; the band's name is actually "Seikima II." The game itself is a pretty standard platformer. You play as Seikima II's singer, collecting money and objects, avoiding enemies, and buying items in shops. 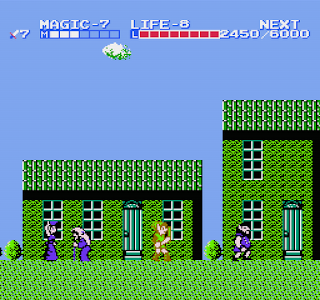 The last game covered this episode in the famously disappointing Zelda 2. The black sheep in the Zelda family (unless you count the CD-i games, but most Zelda fans simply ignore the existence of those), The Adventures of Link radically alters the formula that made the first game one of the most successful titles for the Famicom. The sequel adds some RPG elements - experience points, spells, random monster attacks, villages, NPCs that request your assistance - while removing the money and shops. Additionally, much of the sense of exploration and adventure has been removed from the game, and the overworld is laid out in a much more linear fashion. But the most commented on change in Zelda 2 is the switch from an overhead to a side view for all the action segments of the game. While this isn't necessarily a bad idea, the execution is far from perfect. The dungeons tend to be on the boring side, and many of the enemies are incredibly annoying. Additionally, some enemies do not yield experience points when killed! Judged on its own merits, Zelda 2 is a good, but flawed game. Compared to its predecessor, however, it can't help but be a let down.

This episode's brown medals go to: 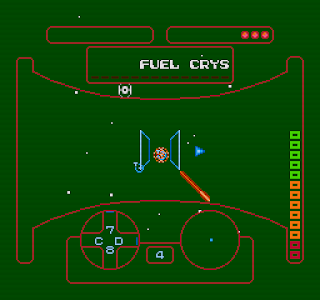 This Star Raiders clone from ASCII adds a few new elements to the formula, but still suffers from poor execution. Granted, Cosmo Genesis is not terrible, but nevertheless ends up being the worst game this episode. While Episode 14 does contain a few uninspired games, there's really nothing this time to compare to Super Monkey or Convoy no Nazo. Or course, Cosmo Genesis was still bad enough to catch the eye of Acclaim, who released it in the US as Star Voyager.

After releasing a string of early classics such as 1942, Commando and Ghosts 'n Goblins, Capcom unleashed this dud. A side-scrolling futuristic beat-em-up, Trojan simply fails to capture the magic of those earlier titles. Again, Trojan is not a really terrible game, but it is a pop fly that arrives after a series of home runs.

Toki no Tabito: Time Stranger - Very simple text adventure game from Kemco.
Electrician - Another oddity from Kemco, this is a port of an old Atari computer game.
Dragon Buster - Port of Namco's ahead-of-its-time fantasy themed arcade game.
Hi no Tori: Wagaou no Bouken - A licensed property from Konami, based on an Osamu Tezuka manga.
Mahjong Goku - The third Mahjong game for the Famicom. It won't be the last.
Crazy Climber - Port of Nichibutsu's arcade classic, which requires a special controller.
Family Trainer: Running Stadium - Another game in Bandai's Family Trainer series.
Labyrinth - Action adventure game based on the Henson/Lucas film. This Tokuma Shoten
release is completely different than the LucasArts game, and is possible developed by Atlus!

As always, Chrontendo Episode 14 may be downloaded at archive.org here.

Posted by Doctor Sparkle at 6:50 PM

The one good thing I can say about that version of Labyrinth, which didn't actually get mentioned in your video, is the fact that it actually uses pretty decent 8 bit renditions of actual music from the movie. Beyond that, though, it's crap :(

HI NO TORI (PHOENIX):
The actual manga for this lasted well beyond 1970, as it was considered Osamu Tezuka's life's work. Multiple volumes were produced covering a rather continual story that transcends people, places and centuries. Tezuka never lived to finish it, but 12 books had been completed and published for years, and most recently translated into English and published by VIZ in the US.
http://en.wikipedia.org/wiki/Phoenix_%28manga%29

The music is different between Japanese Disk and American ROM versions of game is because the Japanese version contained extra sound hardware, perhaps to compete with the extra sound chip in the upgraded Sega Mk.III.

I actually like Zelda II quite a lot, it's a great challenge unlike later Zelda games and the experience system works well I think (in the US version at least, that is notably different, among other changes, between the version). If this weren't called a "Zelda" game, I think we'd be remembering it a lot better today.

I know this is old by now but I would like to say in Zelda II those "harder" enemies you painfully couldn't fight very well are absurdly easy to beat if you jump and slash. I figured that out when I was only four years old...

Also your fight against the boss of Palace 3 (the Iron Knuckle on the horse) you should be using the downthrust ability on him instead of clumsily jumping and slashing into him.

Love this series, but I have to disagree on one point by speaking out in favor of Trojan. I fondly remember both the arcarde original and the NES port. The action is frantic without being overwhelming. The control scheme is unique and fun, alternating on the fly between crouching/standing/jumping and defense/offsense. Finally, the characters and environments are creative and diverse. All in all, a very good action game for its' day, although the learning curve is quite steep. No, it's not on the same level as Castlevania or Ghosts N' Goblins, but I maintain this is a lost gem.

Just started watching these. I'm a big fan of what you're doing but maaaaan you're way off on Zelda II. Challenge, great graphics and sound, and towns? Heck yeah! I know there's not quite as much exploration as the original, but there's still a ton of secrets to discover.

I'll also stick up for Trojan. I enjoy the combination of sword and shield action because I think it gives the game its own flavor compared to Ghosts and Goblins or Capcom's other titles. It's not a bad-looking game and it gives a steep but not insurmountable challenge. Definitely underappreciated in my opinion.

Did you know that you can create short urls with Shortest and make money from every visitor to your shortened links.

Order a Sparkling White Smiles Custom Teeth Whitening System online and SAVE BIG!
* Up to 10 shades whiter in days!
* Results Guaranteed.
* Better than your dentist.
* Same strength Teeth Whitening Gel as dentists use.

Crazy Climber was not packaged with a special controller, nor did it require it, but rather it was packaged with two little control sticks that fit over the famicom D pad that assist in simulating the climbing motion of the character.