After that charming little diversion into the world of Sega, we are back with the newest episode of Chrontendo, which may be streamed or downloaded at archive.org! We open in early 1987, and the Famicom's release schedule starts picking up again, with a nice solid 8 titles released in February. Episode 15 is virtually a special RPG episode, with two distinctively Japanese RPGs released. A handful of RPG games came out in 1986, the first Dragon Quest, the Zelda/RPG hybrid Athena, Hydlide, and the western-style Deep Dungeon. But this episode sees two JRPGs released almost back to back; one turn based, and the other an action RPG. But both seem to embody many of the elements that would define the JPG: super deformed character designs, quirky enemies, a substantial amount of required leveling, a combination of fantasy and sci-fi themes, and a relatively clear cut plot and objectives. Episode 15 almost became a three RPG episode, but Marchen Veil, a purported action RPG, turned out to be more of a top down adventure game. 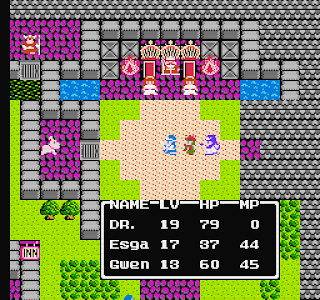 The inevitable sequel to Chunsoft/Enix's suprsise hit of 1986, Dragon Quest II was an even bigger success, selling around 2 and a half million copies in Japan. Later games would sell even more, resulting in DQ becoming perhaps the biggest video game franchise in Japan. In the 1987 the concept of a sequel to a video game was still a little fuzzy; video games with actual plots being
a recent development. Unlike Zelda 2, DQ II is everything you could want in a sequel. It fixed many of the frustrating things in the first DQ, and then improved and expanded upon the things in DQ that made that first game so unique. The major change is the increase of the number of characters from one to three and that multiple enemies are faced in each battle. This makes DQ II's battles require a bit more strategy, as you need to decide which monsters to attack first, how many characters to use offensively versus for support, and whether you want to spend valuable magic points on offensive spells to soften enemies up. Magic plays a much bigger role in this game, but still feels underpowered. There are no really powerful offensive magic spells; the closest DQ II comes to a Nuke spell is Explodet, which does decent damage, but misses with alarming freuency (hitting 1 or 0 enemies out of 3 or 4 is not uncommon).

I had played Dragon Quest II in the past, but never finished it. Compared to later RPGs, it seemed impossibly old fashioned and virtually unplayable. Latter day RPG players may recoil in horror at some of the game's old school peculiarities: if two characters have selected the same enemy to attack and the first character defeats that enemy, the second character will simply do nothing and lose a turn -- the early Final Fantasy games also had this quirk. Yet playing DQ II in the context of early 1987, it seems like a mini-masterpiece and huge step forward for RPGs and console games in general.

The second released from HAL Laboratory, Eggerland manages to be substantially better than Gall Force (covered in Chrontedo 13). HAL had previously released two games for the MSX computers, and the Famicom EggerlandEggerland is a reworking of the second MSX game. One of the best Sokaban type games of this era, Eggerland is creative, clever and sometimes head-bangingly challenging puzzler. HAL would follow this up with lots more titles in the Eggerland/Lolo series. 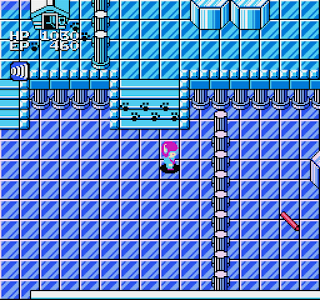 Konami's first RPG was released three weeks after Draqon Quest II, and while it pales next to Enix's title, it is an intriguing game which can be appreciated by English speaking gamers thanks to an unoffical translation. Esper Dream is an action RPG in which enemies are visible on the overworld, but still uses a separate battle screen, similar to Ultima III. Eschewing the usual sword and sorcerty theme, Esper Dream takes place in storybook like setting, with enemies such as bugs, fish and chess peices. Oddly, your arsenal includes laser guns and bazookas as well as ESP abilities. At times Esper Dream can stupidly difficult - later enemies can take many, many hits to kill, even with the best weapons. And some attacks are impossible to avoid. As a result, strategy often plays little part in the game - getting through a level will usually depend on if you have a enough max HP or MP to make it to the boss.

One of the few non-Capcom Disney games of this era, Mickey Mouse was developed and released in Japan by Hudson. By 1988, Capcom had already inked their deal with Disney, and Mickey Mouse ended up being released by Capcom in the US, under the name Mickey Mousecapade. Strangely, either Hudson or Capcom changed many of the enemy sprites for the US release. On first glance, Mickey Mouse appears to be a rather simple platorm game, something the kids can enjoy. However, it soon reveals itself to be sadistically tough at times, perhaps to compensate for the shortness of the game. Unfortunatley, though it is a better than average Famicom platformer, Mickey Mouse is not quite as good as it should be. Once again, Hudson is phoning it in for a game based on a licensed property.

The Bottom of the Barrel 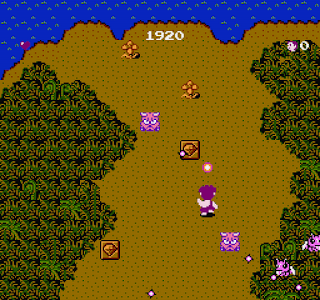 The other Hudson release this episode is almost a complete disaster: a land based shoot-em-up that reminds me of Square's terrible King's Knight. The one notable thing about Shin Jinrui, aside from the title, is that it is the sole game published by Rix Soft. I have no idea how Hudson got mixed up with them, but Rix Soft turns out to be a short lived software division of Ricoh Elemex, a Japanese manufacturer of precision measuring equipment. Taken in conjunction with Adventure Island and Bonk, I'm beginning to think Hudson has some sort of caveman fetish.

Fishing is not exactly the most exciting sport, and you wouldn't expect a fishing video game to be thrill packed. Black Bass is the Famicom debut from the hideously named publisher Hot B. Aside from giving their company a name that sounds like a deviant sex act or an obscure Southern rapper, Hot B introduced fishing simulations into the world of console gaming. Granted, there were fishing games before this, like Fishing Derby for the 2600. But did Fishing Derby let you chose your lure, pick your spot in the lake to drop your line, or give you a reeling-in mini game? Nope, it was Black Bass that first gave us a gritty, realistic fishing video game. Not included: 6-pack of warm Schlitz.

This dull, unimaginative, sidescrolling platformer helps demonstrate has stagnant the genre was
becoming, less than a year and a half after Super Mario Bros. Marginally worse than the Tose developed Pocket Saurus; Ultraman makes this list due to the sloppy programming.

Famicom Golf Japan Course - Another sports title from Nintendo, and a virtual remake of their earlier Golf, courtesy of HAL Laboratory.

Hiryu no Ken - Weird beat-em-up/platformer/fighting game hybrid from Culture Brain. The platforming sections are terrible, but the fighting levels are decent.

Nazoler Land - Jesus, another awful game from Sunsoft. This time it's a "magazine" title, which means Nazoler Land 2, 3, etc will follow shortly.

Ikanari Musician - No relation to Ikari Warriors, this is a very simple music program. With rabbits.

Marchen Veil - Port of 1985 Japanese computer game with a fantasy theme. It'd be nice to see an English translation of this, but I very much doubt this will turn out to be a lost classic.

Pocket Zaurus: Ju Ouken no Nazo - You are transformed into a bowtie and glasses wearing dinosaur and must travel back in time to 10,000,000 BC. Then you move to the right and jump over stuff. Courtesy of Bandi and Tose.

Family Trainer Aerobics Studio/Dance Aerobics - Yet another Family Trainer game from Bandai, released in the US by Nintendo for the Power Pad. Don't worry, there's only a few dozen more of these to go.

And that is it! Check back next time for Chronsega Episode 2, featuring 15 games from August 1986 to February 1987. Then its back to the Famicom with Chrontendo Episode 16, featuring... a couple more cool Konami games.

Download or stream Chrontendo Episode 15 here.
Posted by Doctor Sparkle at 12:03 AM

DANCE AEROBICS
I remember when we dressed like that!