The Sincerest Form of Flattery

I will admit that we are running into a bit of rough patch with the Famicom around this time. Summer 1987 doesn't seem be jammed packed with exciting releases. Part of the problem is simply the sheer number of games coming out at this time. Whereas June-August of 1986 found only 23 games hitting the shelves, there are 53 games released same three months in 1987! While we will still continue to see some quality releases, the amount of bad to indifferent stuff is a little overwhelming.

With that in mind, we notice a theme of unoriginality in Episode 18. Several titles seem uncomfortably similar to well known games from major publishers. I discussed three of them last post. Other than that, what should we be looking for in today's episode? Probably the continued influence of games like Zelda and Metroid. Much of 1986 was taken up by rather straightforward sidescrolling platfomers. 1987 is shaping up to be the year of the action adventure game with non-linear and/or RPG influences. A good chunk of Episode 18's game fall in that category, and expect to see more of the same in Episode 19.

So, let's get down to the brass tacks. Our notable game this episode is another winner from Capcom. 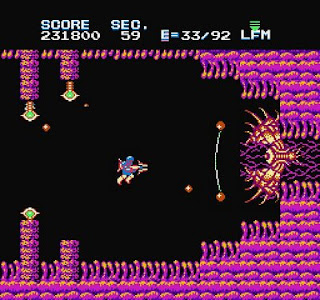 A port of Capcom's 1986 horizontal shooter, Section Z is the most well known in the US of Episode 18's releases. Just like Higemaru from last episode, Capcom dramatically altered the Famicom version. Essentially, they took the arcade game and crossbred it with Metroid. Thus, it's a shooter with branching paths, backtracking, life bar extensions, and so on. The last boss is even named "L-Brain." On the negative side - this is 1987! We expect cooler power-ups in a shooter!

While far from perfect, Section Z is certainly the most interesting Famicom game so far from Capcom, a company that is slowly gaining its footing when it comes to console video games.

Episode 18 is not exactly packed with winners, but a few other nice games are featured. 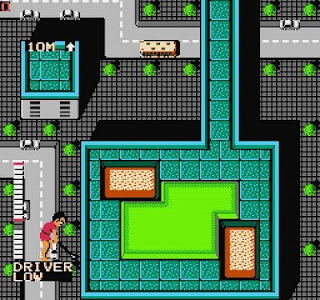 What?! A Bandai/Tose game that's worth playing? Hard to believe, but this turns out to be a decent golf game. Inspired (naturally) by a manga/anime series, Pro Golfer Saru is a nice contrast to the more sedate Nintendo golf games. Rather than attempting to create a realistic golf simulation, Bandai and Tose get all wild and goofy, letting you golf on urban rooftops and courses infested with gophers and mini-tornadoes. While hardly brilliant, there is a certain amount of fun to be had here.

Another game that straddles the line between good and simply OK. This cute little platformer lifts a few moves directly from Super Mario Bros while managing to be reasonably enjoyable. Another DOG game, this time by the obscure developer Carry Lab. This was their only game to get a US release, in heavily truncated form as Mystery Quest. 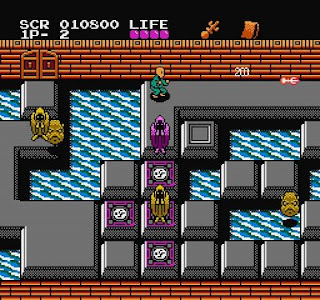 Yet another stylish game from Konami! This Indian-themed oddity has an unusual gameplay quirk. Your character cannot walk but can only jump from square to square on the grid-like playing field. That's one great thing about Konami; even minor, forgotten titles such as this one often turn out to be little gems.

Oh, but what would any episode of Chrontendo be without its share of stinkers? 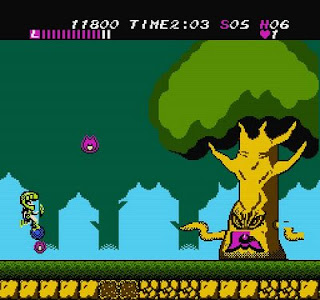 SNK's sidescrolling platformer with a (purportedly) Grecian theme is the most infamous game this episode. It's certainly made the round of "worst of the NES" lists. And it really is terrible game. Funny thing is, the arcade original was not that bad. But in the hands of Micronics, the same guys who made Super Pitfall, the Famicom port has become an irredeemable mess. While playing Athena, I kept wondering why any publisher would hire Micronics to develop a game they planned to put their own name on.

This Hudson release is not so much bad, as it is just disappointing. Rather than sticking to the Takahashi Meijin/Adventure Island formula, Hudson took lame platforming action and stuffed it with heaping handfuls of Arkanoid. The result is a game that is as ridiculously schizoid as it is unsatisfying to play. 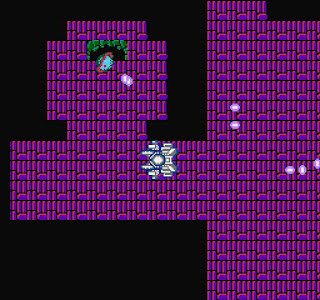 I'm going to assume this is a bad game. I say "assume" because I really have no idea how to play it. I'm sure the entire game can't simply involve driving your tank across nondescript planetscapes, shooting and random enemies. There's got to be more to it than that, but I guess Reflect World chooses the separate the real gamers from from the noobs by obfuscating the game's actual content under a thick layer of Super Monkey Daibouken style pointlessness.

This Toshiba EMI game is undoubtedly the least exciting game to ever feature a bowling shirted gorilla holding a bomb with lit fuse on the box art. The game is a bit of a tease, since no gorillas are featured in the game itself, just plain ol' bowling action.

Notable for one thing: it's a Nintendo published port of a Konami arcade game. Probably the first and last time we'll see Nintendo and Konami team up like this.

Thirteen months after the release of Dragon Quest, someone (Data East, oddly enough) decides to get a 100% bona fide DQ clone on the market. Something tells me this won't be the last DQ clone.
Deep Dungeon II: Yuushi no Monshou

Six months after its release, someone decides to put a 100% bonafide clone of Deep Dungeon on the market. It turns out that someone is Hummingbird Soft and the game is Deep Dungeon II. So far the Deep Dungeon series is nothing if not consistent.
Family Trainer: Jogging Race

You jog. In place. On a mat. Unlike the other Family Trainer games we've seen so far, this did not get a US release.

Jaleco gets all Castlevania with this one. Well, maybe Castlevania crossed with Kid Icarus, but a lot less cool than you would like to imagine.

A very original and intriguing name! Unfortunately, Seiken is just a straight up Zelda clone. Not quite a bad game, but hardly much fun to play either. Just don't get excited because you think this has something to do with Seiken Densetsu. It does not.

There you have it! Stream or download Episode 18!
Posted by Doctor Sparkle at 10:10 PM

Hello there! I'd just like to say how much I appreciate the work you're doing with this. I'm currently watching through the previous episodes - in fact I had never heard about the whole thing until just recently despite the fact that you've obviously been doing this since 2007.

But anyway, thank you for doing it! I'm spreading the word as much as I can, I think you deserve a lot more attention for doing it.

I especially like the fact that all games are being covered, not just the big hits that everyone already knows about.

Well, I've hardly made any attempt to actually promote Chrontendo on the internet. I really don't have much of an idea where anyone hears about Chrontendo. But as soon as I put the first episode up, a few people started downloading it.... I realize it will only appeal to a certain niche audience.

TAKAHASHI MEIJIN NO BUG-TTE HONEY
Probably the only time we get to see Master Takahashi/Higgins animated in his own half-hour program! Noticed TMS worked on this show.
http://www.youtube.com/watch?v=l3zmFvRjzrc

Did you know you can create short links with Shortest and make dollars for every click on your short urls.