The latest Chrontendo is, in theory, about done, but .... it won't be coming out quite yet. You see, I've decided to add a bit of Bonus Content! Namely, a brief little look at computer games in 1987.

As for Ep. 22's primary content, perhaps the most notable event is the sudden emergence of Atlus as a developer of note. Nowadays, Atlus is revered not only for their own games, but for all the quirky Japanese games they release in the US. Back in 1987, however, they were a small independent developer. Previously, we had seen the Atlus developed Labyrinth but I, for one, didn't think too highly of that game.

Now Atlus steps up to the plate big-time, with Bio Senshi Dan, a very nice looking Metroid-lite style game from Jaleco. And, more importantly, Digital Devil Saga: Megami Tensei, from Namco. While technically the second Megami Tensei title (the first being a Wolfteam developed top-down action game for the PC-88 and MSX computers), this is the one that laid down the template for all MegaTen games to follow. A first person dungeon crawler, DDS: MT is considerable more sophisticated than contemporary Famicom RPGs. Rather than simply fighting monsters, you can talk to them in an attempt to convince them to join your party. Once you've collected enough of the little fellows, you can breed them (in a purely platonic fashion) to create more powerful creatures.

For those not familiar with the game, DDS: MT was based on a novel by Aya Nishitani. The basic premise is that evil is loosed upon the world by a young computer geek who has written a program to summon demons (in the game, the program is rather prosaically titled "Demon"). The first thing that sprung to mind after hearing the plot synopsis was that this was very similar to the 1981 horror movie Evilspeak. Well, perhaps the very first thing that sprung to mind was how utterly ridiculous the idea of a computer program to summon demons is. But after that I realized that the premise could have been lifted directly from Evilspeak*. Conidcidence? I suppose its possible. 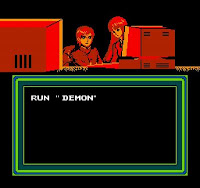 In other news, Transformers mania continues to sweep the nation. One thoughtful commenter pointed out there was a Game Center CX segment on Mystery of Convoy. As expected, Arino runs into trouble, and, like everyone else who has ever played that game, dies about 1.5 seconds into the first level.

And finally, I noticed that Google reported a few folks came to the site by searching for "princess peach strip slots." For those not familiar with this flash game.... well.... check it out for yourself, I suppose: http://www.google.com/search?q=princess+peach+strip+slots. Its exactly what it sounds like.**

So, check back "shortly" for Episode 22.

*For our UK viewers - Evilspeak was one of those "video nasties" banned in the 80s, though was later reclassified.

** I am not judging anyone here, folks. I can't blame people for wanting to see Princess Peach nude.

Posted by Doctor Sparkle at 6:38 PM

I think later games in the MegaTen series get into the idea that the "demons" are really just fragments of the collective unconscious. The computer program doesn't summon them so much as acts a conduit that lets the operator will the demons into reality, or sometimes just open a door the demons can use to will themselves into existence.

Atlus thankfully dropped the whole summoning demons with computers nonsense in later games. The main Shin Megami Tensei series generally have demons running amok, ruining Earth apocalypse-style. The Persona games take place in a more everyday setting, and the summons are expressions of your true inner being or something like that. At any rate, the games are all slathered in typical JRPG mystical hoo-hah.

I'm afraid you're quite incorrect regarding SMT. In Shin Megami Tensei I, the demons who trigger the apocalypse emerge into the real world thanks to a computer program and you store spare demons in your PC. Shin Megami Tensei II is a direct follow-up to SMT so you're still storing demons in computers and there's still a technology link being explored.

Now, SMT3 does ditch almost all of the technological aspects of the franchise in favor of a more mystical explanation for things. SMT3 is also kind of weird in that it's very specifically about Buddhism when the other games are more broadly about myths.

I don't remember Persona 3 using a techno-McGuffin but Persona 4 brings it back. In Persona 4 the world of demons is accessed by jumping through TV screens to roam around what is implied to be the realm of the gods/spirits/etc.

Persona 3 and 4 use the demons in kind of an odd way. They're basically personality aspects the main character can express because he's the Fool arcana, but otherwise they behave like typical SMT demons. Only your other playable characters are locked into single demons as their Persona. P4 pretty clearly argues the demons can and sometimes do exist as independent entities while P3 is a bit more nebulous on the subject.