Chrontendo 24: This Time It's Personal!

So, we've made it. After much swearing, sleepless nights, and shaking fists at the heavens, Chrontendo Episode 24 is finally here. By all means, head on over to archive.org to stream or download. I hope you are in a festive mood, since Chrontendo 24-27 will be covering the 1987 holiday season. What do we have to look forward to? How about Mega Man, Final Fantasy and Metal Gear? Yep, plenty of big money franchises kicked off in December '87.

Today, however, we'll have to satisfy ourselves with the release of Mike Tyson's Punch-Out!! Or for the Japan-centric among you, the big game over there was Hudson's Famicom version of Japan's biggest selling PC game, Xanadu. And, of course, the unveiling of Hudson's and NEC's cutting edge new console, the PC Engine. These were heady times for Hudson, I'm sure. Unlike Sega, Hudson decided to keep one foot squarely on each side of fence. While releasing a steady stream of software for their new console, they continued to turn out games for the Famicom. Apparenlty Nintendo was fine with that.

Also, in the bonus content department, we have a reasonably long look at the arcade games of 1987. The big three being: Contra, Double Dragon, and R-Type. Ever wonder why Contra is called "Contra?" When I first saw the game in arcades, I assumed it had an uber-patriotic, right-wing theme to it, based on the title and military theme. Then it turned out you weren't killing Communists, you were fighting aliens. Weird, huh?

Let's get started with this episodes MVP: 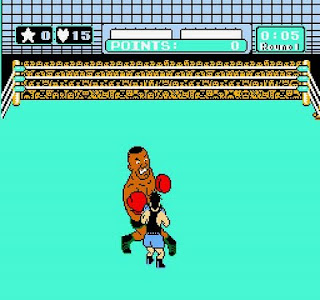 The first couple years of the NES in the United States were dominated by three games: Super Mario Bros, Legend of Zelda and Punch-Out!! The brainchild of Genyo Takeda from Nintendo R&D1 (the same guy behind the cartridge battery backup and the N64's analog control stick), Punch-Out!! was a perfect example of an arcade port done exactly right. Nintendo's home system couldn't replicate the arcade version's graphics, so it focused instead on tightening up the controls and polishing the gameplay until it gleamed. Add in the name and likeness of Mike Tyson, the newly crowned undisputed heavyweight champion of the world, and Nintendo had an instant, massive hit.

Those interested in Punch-Out!! will undoubtedly want to check out this lengthy conversation about the game between Takeda, Shigeru Miyomoto, Satoru Iwata, and others. Among the many fascinating nuggets found within: the double monitor cabinet was designed to clear out an excess of monitors in Nintendo's warehouses. Thanks for Game Developer Research Institute for posting the link. 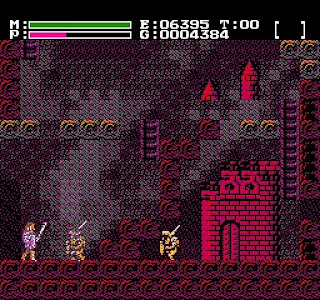 Nihon Falcom may have been a big player in the Japanese computer game scene, but they seem hesitant to try their luck in the console market, preferring to license their games on a one-off basis to various publishers. Here we find Hudson releasing a special Famicom exclusive spin-off of Falcom's mega-hit Xanadu. This couldn't really be called a "port", since Hudson virtually redesigned the game from scratch, stripping down the RPG elements to the bare essentials. Faxanadu is a strange, fascinating, and often irritating game. If nothing else, Hudson's sense of visual design shines through the sometimes clunky gameplay. Certain moments, like an eerie world enshrouded in smoke and fog look like nothing else on the Famicom.

On the exact opposite end of the video game spectrum, we have Taito's Bubble Bobble. Unlike Kiki KaiKai, Taito decided to port Bubble Bobble to the FDS virtually untouched. It stands as one of the best and most accurate ports of an arcade game we've seen so far. Never played Bubble Bobble? Well, you control a dragon that breathes bubbles rather than fire. But don't be alarmed, those bubbles are deadly enough for your dragon to go on a 100+ level murder spree, killing every single creature that crosses his path. Never underestimate the homicidal potential of bubbles in the right hands. 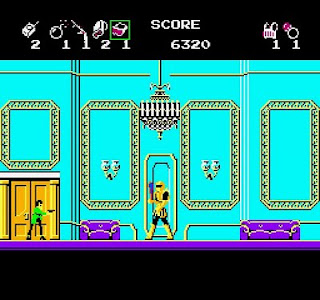 A surprisingly well done anime-based game from Namco and.... Tose?! Yes, schlock meisters Tose finally put their name on something decent. A pretty solid action platformer that allows you to alternate between three playable characters, sort of like SMB2. Though in the fine Japanese tradition of making supposedly-tough characters vulnerable to wussiest little enemies, master thief Lupin, arms expert Jigen and samurai Ishikawa Goemon XIII can all be taken down by stray cats.

On the flip side of the coin:

My ill will towards this game has already been revealed to the world. Still, I've got to point out that LJN's entry in to the video game market opened the floodgates for movie tie-ins and licensed IPs on consoles in the US. It's worth recalling that back in 1987, games based on movies were still far and few between. The main exception being games released on the Master System featuring Sylvester Stallone. 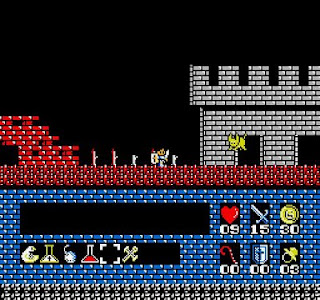 Compile ported the popular Falcom computer game and squandered the opportunity. Imagine Legacy of the Wizard, except with a much smaller world and lots of running back and forth over the same level. You mostly look for various hidden items that have no in-game description whatsoever. Doesn't sound to bad? Well, should I mention there is no way to save your game and no passwords? Or that you have one life and no option to continue?

Absolutely my least favorite racing game for the Famicom so far. Surprising, because it's from Nintendo and Hal. I was hoping this would be an updated version of 1984's F1 Race, but it turns out to be an old-school top down racing game. 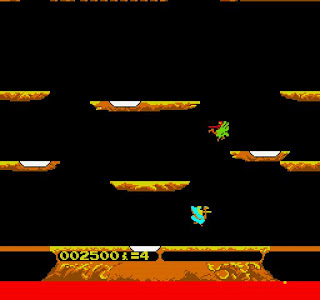 Not as terrible as Karate Kid, this Westone developed LJN game is merely short of repetitive. Based on the film that finally killed the Jaws franchise, Jaws: The Revenge. 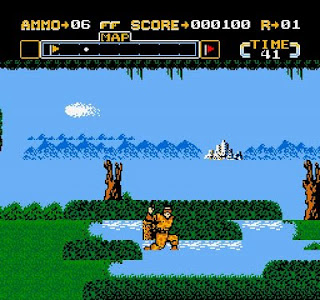 The best of the three LJN games, Gotcha! is a decent little light gun game. Though one that requires you to use the light gun and the regular controller simultaneously.

Nutty space RPG from Nichibutsu featuring Star Raiders style battles. Not nearly as interesting as it might sound. 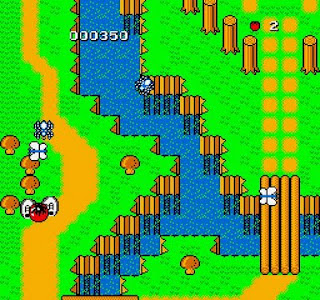 The second game from VAP; about 1/100th as awful as their first, Super Monkey Daibouken. Here you control an ambulatory tomato with enormous feet, as you wander around kicking rocks and mushrooms looking for Nike shoes. Wait, what?

Remember Ikinari Musician from earlier in '87? Sort of a virtual music studio game? Well, Family Composer is just like that, only with 100% fewer dancing rabbits.

So, it was a long time coming, but hopefully, Episode 24 will be worth it. Episode 25 will presumably be free of any bonus content, and thus arrive on time. Once again, Chrontendo Episode 25 may be downloaded here.
Posted by Doctor Sparkle at 7:47 PM

Nice Episode,expecially the Bonus Content was interesting, and I am looking forward to try some ofe the arcade games on an emulator.

And I just looked into wikipedia what the title Contra is in game explained as: A title awarded to a superior soldier possessing almost super human drive and ability, while excelling in guerrilla tactics.

How the guys of Konami came up with it is questionable, I think these potheads of the crative department used up a monthly dose of the shit they smoke and just puzzled random letters together.

Air Foot has an ASCII copyright and an ending with good English.

Karnov was by Data East, not Nichibutsu.

I LOVE YOU DR SPARKLE

CRV -- wait a sec, the guy's name is Tomatobowerman? And the shot of him at the very end in humanoid form, with hair, is a little creepy looking. And what is the ASCII connection about, I wonder?

In regard to Contra, Konami's explanation of the word seems a bit disingenuous. I assume they were aiming for something that implied "guys with guns fighting in the jungle." Either way, the first time I saw the cabinet, I do recall being a bit surprised that a video game would name itself something as controversial as "Contra."

excelent work, i really like you're videos
Thank you Dr. :)

JOUST
Kinda funny how that they did change the sprites unless given the circumstances they were trying to make the same seem graphically superior for it's time when it was released in the states.

Joust was one of those I have fond memories of playing with my siblings on the Atari 2600 constantly a quarter century ago.


BUBBLE BOBBLE
An arcade classic I should've played back then but didn't think about it.


FAMILY COMPOSER
If only the had licensed this over here! The people who do those silly Mario Paint compositions might get a kick out of this for actual 8-bit fun!


PUNCH-OUT
Another classic. Kinda surprised they didn't try to develop this into an OVA or something.


ARCADE HISTORY:
Still, "SDI's" vision of NY getting nuked was a very common thing we saw a lot back then. Not that they couldn't do it now (unless they use another city or have to have it happen elsewhere like Tokyo, which gets bombed constantly in kaiju/tokusatsu/anime daily).

No doubt the 1987 arcade scene was a big one. I remember when I first saw Pac-Mania around that time and literally wet my pants!

I have just installed iStripper, and now I enjoy having the hottest virtual strippers on my desktop.