Well, it's late, but Chronsega Episode 4 is finally here. As always, it may be downloaded or streamed at archive.org.
This episode not only wraps up 1987 (almost) but also features the most well loved Master System game ever, Phantasy Star. In fact, Chronsega 4 acts as part one of a special RPG showdown, with part two being Chrontendo 26. I was somewhat surprised to learn that Phantasy Star and Final Fantasy were released only a few days apart. Since those games are the two 8-bit RPGs that still hold the most fascination for gamers nowadays - at least in the US - I figured I better make a big deal about their release. Which is better? That's a matter of personal opinion. Both have their strengths and weaknesses, but I'd be curious to know what the viewers of Chrontendo think. So, feel free to give me your opinions. As for me, playing the games virtually back to back will undoubtedly provide a new perspective. 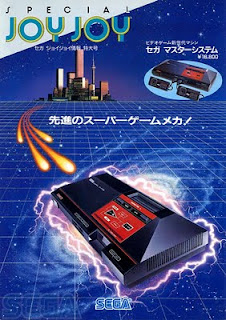 October also saw the redesigned Mark III released in Japan under the Sega Master System name. During the last half of 1987 Sega slightly picks up the pace of their releases. September through December of 1986 gave us nine Master System releases in Japan; the same period in 1987 sees 14 games. (And if you're wondering about 1988: six! The SMS was clearly on its way out in Japan by then.) Sadly, during its Japanese lifespan, the single month with the most games released was October 1987, with six games. Starting in 1988, we see Sega shift its focus from Japan to the US and Europe.

OK, so let's take a look at this episode's games. Our MVP is, obviously: 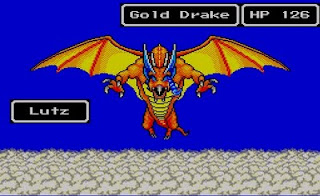 Sega finally catapulted itself into the big leagues of console gaming with this one. PS is considered (at least in the West*) to be among the best 8-bit games. Sega must have been quite pleased with the results since it became Sega's first console only franchise, with a sequel released a little over a year later. 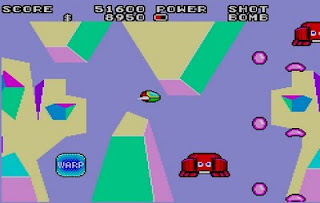 If there was an award for most incongruous game title this episode, Fantasy Zone II would take the prize. How can Opa Opa even cry? He's a space ship! Sega choose not to alter a winning formula: FZ II is simply a bigger, wackier, more colorful take on the first Fantasy Zone. Strangely, FZ II did things backwards by starting off as a console game, then receiving an arcade port. 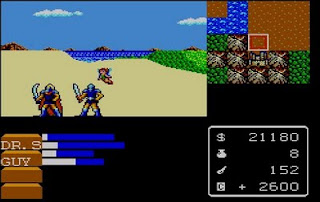 The other RPG this episode, and the far inferior one. Title sound familiar? That's because we saw a Japan-only Famicom release a few episodes ago. The Famicom and Master System versions are completely different, and some of the kinks have been ironed out in Sega's release. Still, the SMS Miracle Warriors is quite a slog: tons of grinding and wandering around with not much payoff. And compared to Phantasy Star, there's really nothing in the way of characterization or plot. Hardcore Gaming 101 also has a fine article on Haja no Fuuin.

There's nothing too exciting about about Penguin Land. It's a decent looking puzzle/platformer game in which you roll around an egg. The Famicom had plenty of games like this, but Sega didn't seem real keen on puzzle games. 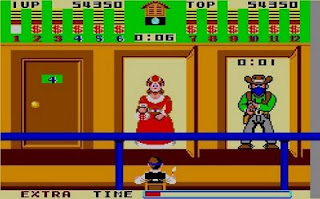 A Europe only release, Bank Panic is a port of Sanritsu's arcade game. Oh sure, the game is simple and repetitive but I find it oddly appealing. 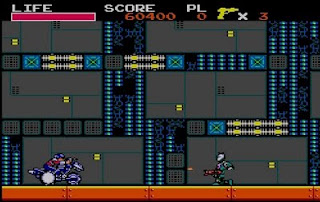 While I didn't care too much for the first Zillion, I saw that a lot of effort was put into it. I believe that much of the team that had worked on that game was responsible for Phantasy Star, meaning that the sequel was in the hands of less creative designers. Presumably Sega took a look at the Famicom catalog and note that games based on cartoons were supposed to be slapdash, generic affairs. Thus Zillion II is closer in style to the Transformers games than it is to Metroid. The Master System is not having a very good track record when it comes to sequels (see also: Alex Kidd, Zaxxon 3D, and next episode's Opa Opa game) 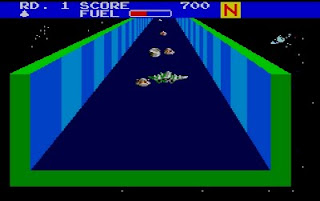 Releasing terrible console sequels to classic arcade titles? Not the best way to protect the value of your brand, Sega. One the few games to use Sega's fancy 3D goggles, Zaxxon 3D must be one the worst releases for the Master System.

The 1987 arcade game had a lot going for it: impressive pseudo 3D graphics, an insanely rockin' soundtrack, huge explosions. The SMS port has.... none of those things. Despite an enormous 4 megabit cartridge, Sega utterly fails to either give us a worthy approximation of the arcade game or fashion it into something more suitable for consoles.

Let's not forget the rest: 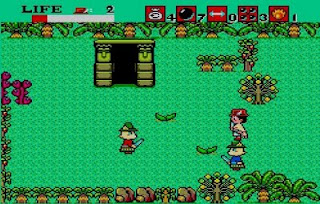 A prime example of a good idea that doesn't live up to its potential. The gimmick in Aztec Adventure is that you can through money at certain enemies, converting them into your followers. Alas, any attempt to put your hired helpers to good use will be met with utter frustration as they march directly into enemies and get stuck on rocks and trees. Other than that, the game superficially resembles Legend of Zelda, minus the non-linearity, exploration and fun.

Shoot down missiles before they blow up the planet. Wait a sec... didn't we play a game just like this called Missile Defense 3D?

A reasonable playable golf game, I suppose. The last game released under the "Great" sports name. 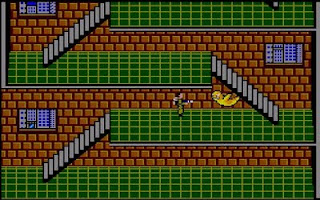 Nowadays, lots of games are released on multiple consoles, but this was rare back in the days of the Famicom/Master System rivalry. Ghostbusters, along with Spy vs Spy, Choplifter, Haja no Fuuin and Fantasy Zone were the exceptions as of 1987. The Master System clearly has the upper hand in these cases; the Compile ported Ghostbusters is much better than Tokuma Shoten's crappy 1986 Famicom version. This means the SMS Ghostbusters is merely dull, rather than out-and-out awful.

Another unsuccessful port of a popular Sega arcade game. The Master System Alien Syndrome doesn't bear much resemblance to the original game, but the most surprising thing is just how ugly it is. You really get the impression very little time and effort was put into this thing.

Yep. There was exactly one mahjong game released for the Master System and this is it.

A BMX bike racing game, with Alex Kidd. Will we ever get a real Alex Kidd sequel?

I'm tempted to say that Chronsega 4 has the best selection of games we've seen for the Master System so far. After all, Phantasy Star stands heads and shoulders above everything else we've seen released for the console. But, the other games on display here aren't too impressive. In fact, there are some big disappointments, such as Zillion II, Aztec Adventure and After Burner. PS shows that Sega has turned an important corner when it comes to console games; let's hope they continue to move in the right direction.

Maybe things will be different in Chronsega 5. Looking at the list of titles I'll be covering for that episode, there are a lot of games I haven't played and some intriguing sounding titles. Until then, head on over to archive.org and check out Chronsega Episode 4.

*Do you recall the Famitsu readers poll a few years ago? Japanese gamers voted on the 100 all time best video games. There were many 8 and 16 bit RPGs on the list, but none of the Phantasy Star games made an appearance. We'll be discussing this list in more detail in Chrontendo 26.
Posted by Doctor Sparkle at 8:20 PM

Chronsega 4 was in interseting episode, nice to finally see the typical fault of SEGAs marketing strategy started in the 80s...not just poor Alex Kid, also Zillion. While the first one was arguebly the only Metroid competition on the Sega Side, Part 2 blew it allready. Part 1 wasn't a price either, but it was an interesting start with some unique concepts, which could really become a Metroid Killer in the course of the series. But Zillion 2...meh. I don't know if there are any more parts of the series, but I am interested to see.
Oh yeah, and take your time with Chrontendo 26, I know that it takes some time to finish Final Fantasy, I played the GBA Version across the course of two months or so in college...which is the reason why some of my notes from seminars have teleporter sequences in them... =)

Yeah, those Legacy of the Wizard speed runs are crazy. Why anyone would want to devote so much effort to THAT game is beyond me.

As for Zillion, there were no more games after The Tri Formation. The show wasn't on the air for very long, so I assume Sega simply didn't feel the need to pursue that particular franchise any further.

Ep 26 is a bit of a tough one, with both Mega Man and FF. I've finished playing FF, and I was able to plow through pretty quickly, since a) I've played it before and b) I used cheats to bypass the grinding. And of course, the game can be beaten quickly: http://www.archive.org/details/finalfantasy-tas-theaxeman
This speed run is Tool Assisted however. It's worth noting, by the way, that the NES FF is WAY harder than the GBA version. It's a pretty brutal game.

God the FM sound is terrific to games I probably wouldn't play anyway (and rather a shame someone didn't bother perfecting a good pin converter for these games or I'd try to play import Master System/Mark III cards on my US console or vice versa).

FANTASY ZONE II
Aside from the lackluster Arcade port of the game, a far better treatment occurred nearly 25 years later with the PS2 release of the Fantasy Zone collection through the Sega Ages volumes, in which the entire game has been programmed using the same System16 hardware of the first game, giving it a unique reproduction and a "what-if" to a game that would've bee sweet in the arcade if Sega had tried.
http://www.youtube.com/watch?v=ZZrpnwCk6Tc


ZAXXON
ZAXXON and CONGO BONGO were my classic Sega favorites. Still, this port on the Mark III/Master System is a lot better than the Atari 2600 (god the ColecoVision port was superior for it's time). :-)
http://www.youtube.com/watch?v=Nh0qiaYDTkI


PHANTASY STAR
Still think of how dumb it was for the US consoles not to get the FM chip at all. The music sounds terrible with the default hardware.