So the secret project which was taking away valuable time from the production of Chrontendo 29 turns out to be Chrontendo Episode 1 Revised! This is merely a freshly recorded version of the first episode of Chrontendo, now available at Archive.org.

I was never particularly happy with the first episode. After all, I was still learning, had a terrible microphone, and was really just amazed that I was able to create the video at all. It's always irked me a bit that many people's first exposure to Chrontendo might be that particular episode, so I've finally taken it upon myself to fix that first episode. Eventually, I might try re-recording episodes 2 and 3 as well.

Probably most of you reading this have already seen Episode 1, but it might be worth your while to check out the new version. Not much has changed in terms of content; there's a brief history of Nintendo prior to 1983, and 15 games from July 1983 to June 1984. Originally, this episode was encoded at a pretty low bitrate, and it now looks quite a bit better.

If you need a refresher course in the early history of the Famicom, then here it is. A good chunk of the games covered here would eventually be released as launch titles for the NES in 1985, but very few of them have any sort of following today. They comprise a few arcade ports, some light gun games, three very simple, let effective, sports titles and two educational games. As no third party publishers had signed on yet, all 15 games were released by Nintendo themselves. 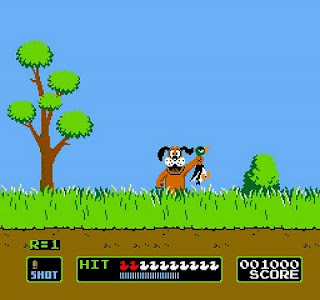 Of the games covered here, the one most likely to be remembered today is Duck Hunt, and that might be because it was released as a pack-in with the deluxe sku of the NES. By later standards, Duck Hunt is a staggeringly simple game: containing one screen, two "characters" - a duck and a dog - and about 2 seconds of in-game music. Pac Man is positively epic by comparison. Yet within this simplicity is found a sort of lovable charm. It was very easy to pull out Duck Hunt for some quick shooting fun with friends. And that damned dog never failed to infuriate and/or amuse. 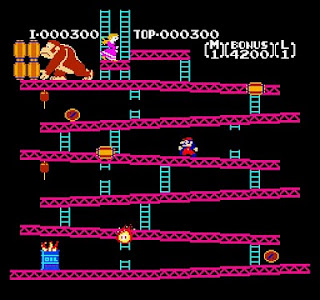 Until relatively recent times, a major selling point of a console would be its arcade ports. This was true from Space Invaders on the Atari 2600 up until Virtua Fighter 3 on the Dreamcast. The Famicom was no exception, hitting the market with almost perfect versions of Donkey Kong, Donkey Kong Jr, and Popeye, and then bringing out Mario Bros a few months later. Donkey Kong is the one game from Episode 1 that can be considered a timeless classic. Shigeru Miyamoto's first game, DK was the pivotal point in Nintendo's history. Its release was the event than began Nintendo's transformation from a toy manufacturer and producer of uninspired arcade games, to one of the biggest names in entertainment history. The Famicom DK is a nearly pixel-perfect translation of the arcade game, and certainly the closest you could get a playing an arcade game in your home at that time. 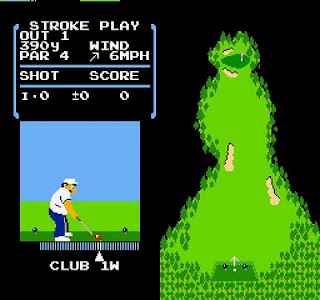 Sports titles are always a reliable way to get some product on the shelves quickly, especially for new consoles. See Chronsega and Chronturbo for some additional examples of this. Naturally, Japan's twin sports obsessions, baseball and golf, found their way onto the Famicom almost immediately. For the time, Baseball ( from 1983) and Golf and Tennis (both from 1984) were cutting edge; a major step above Intellivision's highly regarded sports games. Throw in a couple titles based on Chinese games, Mahjong and Gomoku Narabe, and you've just come up with a half year's worth of releases without having to think of a single new idea for a game. As a huge bonus: Golf, Mahjong and Baseball were all shockingly successful in Japan, moving over 2 million copies each and outselling games like Zelda and Metroid. 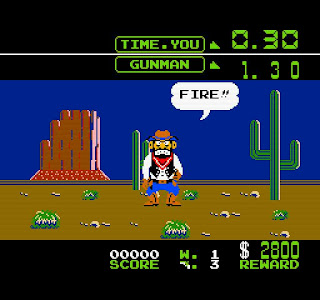 Probably the only truly original games this episode are those created for use with the light gun. And even one of those, Wild Gunman, is based on an old, pre-electronic arcade game from Nintendo. While the game play can be described in one short sentence -- "you shoot at stuff" -- these games retain a certain amount of appeal. The breakdown is as follows: in Duck Hunt you shoot at ducks, in Wild Gunman you shoot at outlaws and in Hogan's Alley you shoot at gangsters. Furthermore, Wild Gunman is noted for being the first Famicom game to try speech synthesis, and Hogan's Alley is the first to feature any sort of scrolling. 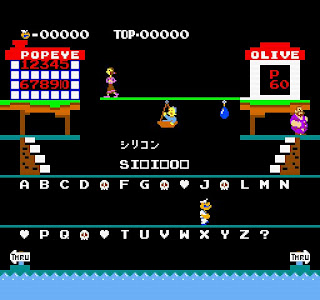 Lastly, we dregs of the barrel: Popeye no Eigo Asobi and Donkey Kong Jr. Math. Both are quickie education games which recycle virtually all their sprites from the parent games. Happily, Nintendo immediately dropped any pretense of using the Famicom as a tool for improving the minds of young people.

Looking back, it's difficult to know what to make of the Famicom's first year. We don't find most of these games to be particularly interesting nowadays. Yet, the platform did what it needed to do: demonstrate its superiority to any other video game console on the market. The Famicom was an almost instant success in Japan, paving the way for Nintendo to expand into the western world. So, if you want to relive the earliest days of the system, head on over to Archive.org and check it out.
Posted by Doctor Sparkle at 9:59 PM

See, this is really cool, because I started with episode 6. I can't watch anything before that because I'm too weirded out by your voice in the early episodes. Now I can watch the beginnings of Nintendo history!

Wow! A first Dr. Sparkle, A remastered Crontendo, Going be watching this in a moment, looking forward to it.

y'know, I recently started rewatching Chrontendo a second time. I kinda liked the first episode as it was cause it showed how far the series (and you) had come. Anyways, keep it up!

Thank the baby Jesus. I've never made it more than 30 seconds into that first episode and it did put me off the others.

Though I liked the original first episode, because i was mesmerized by the content, you did a really great job of redoing it. If you wanna do this with the other early episodes, your on the right track.

Yes, I have been seriously thinking about redoing Eps 2 and 3, when I have the time. At the moment, I'm focusing on #29, which shouldn't take nearly as long as 28.

FWIW, I think your time is best spent on new episodes, because there are ALWAYS things that could be better about any creative project. That said, Ep 1 *was* a lot rougher than the rest so it's understandable, and this is certainly a big improvement!