Another Blast from the Past

An ongoing Chrontendo mini-project is to re-record the first few episodes, which all suffer from terrible sound - among other problems.  So today I present a fresh, new version of Chrontendo Episode Two, available to download at the usual spot.

I have absolutely no idea why, but Episode Two is the most downloaded episode of Chrontendo, with almost twice as many hits as Episode One, and over three times as many as Five, the SMB episode.  It must be the scintillating selection of games featured.  C'mon, Pac-Man?  Lode Runner?  Excitebike?  Who could resist?

In all seriousness, the second episode does cover an interesting time period: the second half of 1984.  The Famicom reached its first year anniversary in mid 1984.  At that point Nintendo had exhausted their supply of arcade titles to port, barring the brand-new Punch-Out!! or really ancient games like Space Fever.  A steady supply of games would be essential to the console's survival, which meant Nintendo could either subcontract other developers to design games, or allow third party publishers to release Famicom carts.  Nintendo ended up doing both.

Hudson Soft has always had a special relationship with Nintendo.  Early on, Hudson ported some Nintendo games to MSX, heavily altering them in the process.   Despite Nintendo's well documented hostility to licensees releasing games for other consoles, Nintendo didn't seem particularly vindictive when Hudson teamed up with NEC to create the PC-Engine.  Hudson continued to release games for both consoles simultaneously.  In fact, the Will Virtual Console debuted with PC-Engine games in its library.  So, it's not surprising that Hudson was also the first third party publisher, releasing two titles in late July 1984. Shortly thereafter, it reworked one of its own computer games, Jyankyo for the Famicom.  This was published by Nintendo themselves, under the name 4-nin Uchi Mahjong.

Immediately afterwards, Namco became the second outside company to produce Famicom games, starting with Galaxian, and following that with three more arcade hits: Pac-Man, Mappy and Xevious.  Both Xevious and Hudson's Lode Runner were hugely successful, selling over a million copies each.  In 1985, more software companies joined the party, initiating a strange period when the Famicom existed primarily as a means for delivering high quality console versions of arcade and PC games.

About this time, Nintendo also began looking at using outside developers to ease the strain on their own development teams.  Balloon Fight was the first Nintendo game from Hal Laboratory, and was programmed by the young Satoru Iwata.  Eventually, of course, Nintendo would rely heavily on 2nd party developers such as Game Freak, Intelligent Systems, and Rare, but Hal  has been with them consistently for 26 years.

At this time both Nintendo and other publisher followed sort of a house style when it came to box art and packaging.  Famicom boxes were shaped like the carts: longer than they were tall.  Almost all Nintendo releases used a gray background with a cartoonish illustration in the center.   The game's title would be written in katakana on the left side, and the Nintendo logo would be on the right.  Hudson followed a very similar design blueprint for their own boxes.  There were a few exceptions: some boxes used different colors, and Excitebike features a more realistic painting of a motocross race as its centerpiece. 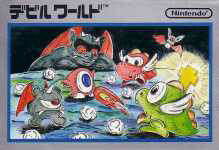 For those who need a refresher on late 1984, here are the games covered this episode: 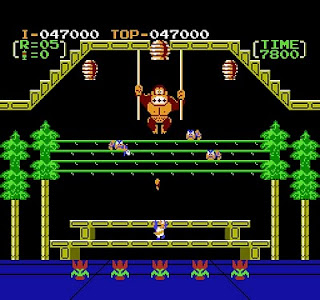 Nintendo's first failed sequel, and the game that killed off  Donkey Kong for 10 years.

Hudson's first two console games. Nuts is based on their own computer game; Lode Runner is a Nintendo-fied port of the popular Apple II game.

Namco's first console game, a port of their 1979 arcade game.  Galaxian was an fancy variation on Space Invaders, and proved to be Namco's first major arcade success. 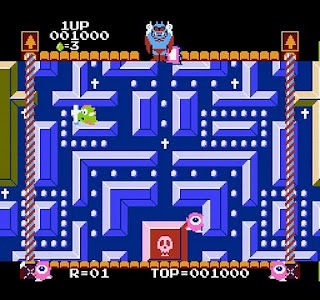 The most "interesting" game this episode, Devil World is the first product from the team of Shigeru Miyamoto, Koji Kondo and Takashi Tezuka.  The next two games these three worked on were Super Mario Bros and Legend of Zelda, so Devil World certainly has impressive credentials.  It's a rather bizarre Pac-Man clone featuring a cute dragon and an inappropriately dressed devil.  The high level of religious imagery prevented a US release.

The first racing game for the Famicom, but certainly not the best.  It's also notable for being the first Famicom game to attempt any sort of sprite based 3D. 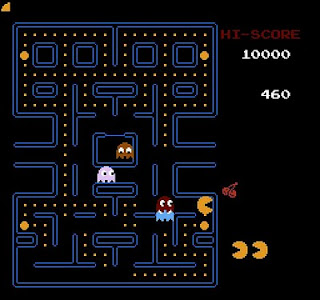 The game needs no introduction, but it should be pointed out that the Famicom release was the first nearly perfect port of Pac-Man after 3 years of botched attempts.  Also, this may be the game with the longest delay between the Japanese and US release: 9 years.  (Unless you count the Tengen release, which Nintendo seems to deny the existence of.)

I originally pegged this as an original title, but it turns out to be a console version of a Hudson MSX game.  Either way it's still just a mahjong game. 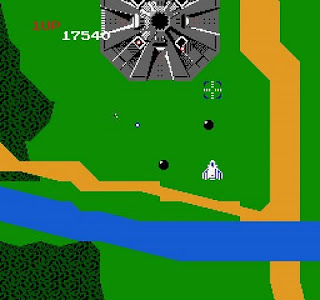 While not the first vertical shoot-em-up, Namco's 1982 arcade game popularized and defined the genre.  The Famicom version is pretty darned accurate reproduction. 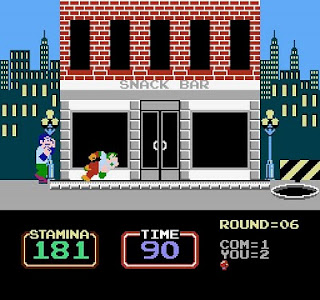 Again, not the first one-on-one fighting game, but still a very early entry in the genre.  Naturally, it takes place in NYC, since that's all people do in New York: engage in street brawls.

The last Namco game this episode; once again, it's an arcade port.  Perhaps sending a mouse police officer to apprehend a gang of cats was not a wise choice on the part of the Mappy Land PD.

Another virtually forgotten original from Nintendo.  It sits halfway between being a Pac-Man clone and a pole dancing simulator.

Unlike Clu Clu Land and Urban Champion, this one still elicits some excitement and nostalgia.  It's a fun game, but is also noteworthy for being the first Nintendo developed game to feature full on horizontal scrolling.

The first Famicom game to feature the talents of Hal Laboratory - at least as far as I know.  An unassuming yet playable Joust clone.  Hal's programming trick for smoother character movement was picked up by Nintendo and later utilized in Super Mario Bros. 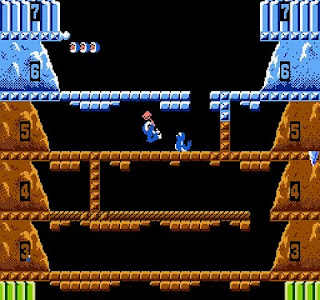 Eskimos clubbing seals?  Polar bears in red Speedo briefs?  A condor that steals eggplants?  It's all found in Ice Climber.   Too bad weird jumping controls hamper the fun a bit.

Wow, a lot of "firsts" this episode.  Up next is another quickie project, and then, before too long... Chrontendo 34.  Until then, check out Episode 2 Version 2.0 at Archive.org.
Posted by Doctor Sparkle at 6:56 PM

Sorry for not leaving comments over the last few months Dr.S (my broadband was cut off for non-payment So any net-time I had was limited) But I wan't to say I have really enjoyed the Remake of ep.2 and the previous Chrontendos over the last few months. The commentary is sharper then ever, and I have to confess I nearly peed myself when you showed the "Swastika" icon on Desert Command on ep.31 (With doomy musicial cue).

Oh by the way, If I ever see any Persimmons I'll send them to you so you can put them to "Justice".
I have not played Princess Tomato. But seeing Percy's face just makes me hate Persimmons more than ever.

I just found this site about a month ago and I'm finally all finished with all the episodes so far. I love the show, and totally dig what you're doing. Keep up the great work!

Hey Doc, can you tell me where I can find out more about the technique Hal used to refine player control? You mentioned it near the end of the Balloon Fight segment.

Hey, Cornervizion, nice to see you around again. I'll let everyone in on a secret - in the Percy photos, an heirloom tomato was standing in for a persimmon! It just happened to be an orange tomato with a sort of persimmon-y look to it.

Re: Hal's technique on Balloon Fight. Iwata discusses it in a rather informative roundtable conversation on the Wii site:
http://us.wii.com/iwata_asks/nsmb/vol2_page1.jsp, though he doesn't give much technical detail. One interesting note: in ep 2, I state that the arcade Balloon Fight was done by Nintendo. Specifically it was by SRD, which Nintendo describes as a "subsidiary" and which has even been called a subdivision within Nintendo EAD. The article linked to above, however, seems to suggest SRD is a separate company from Nintendo. I'm pretty sure that's not the case. Maybe Nintendo bought SRD at some point?

Very strange that episode 2 is the most popular! Like you said, the selection of games is far from the best, so I wonder what the deal is-- did a popular site (1up/IGN/etc) link to that one or something?

Anyhow, I liked the original version just fine, but you have really come a long way! Your newer episodes are really entertaining, and as funny as they are informative (I will let you decide whether that is a compliment or not-- kidding).

I've just downloaded iStripper, so I can have the best virtual strippers on my desktop.

If you need your ex-girlfriend or ex-boyfriend to come crawling back to you on their knees (even if they're dating somebody else now) you must watch this video
right away...

(VIDEO) Text Your Ex Back?