Hey, here's a little post-Chronsega Episode 6 update for you!  First off, if you haven't noticed, there is a follow up video to Chronsega 6 on Youtube.  It simply illustrates a few differences between the arcade game and SMS game in regards to difficulty and ninja magic.  The video is quite short but says a few things that weren't really touched on in Chronsega 6 (but should have been.) 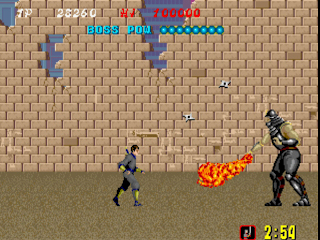 Last Shinobi pic on this blog for a while.


Also, it's been pointed out that QuickTime might experience some problems with the h.264 version of Ep. 6.  I tried playing it on Windows QuickTime and it wouldn't play at all.  QT gave me some crazy error message saying there was a "bad public atom" in the file.  Jiminy Crickets!  Is QT really that fussy?  One "atom" can mess the whole thing up?   I can play videos files that are all corrupted and mangled to hell in VLC, but apparently Mr. Steve Jobs requires absolute perfection from our video files.  Anyway, I re-encoded the file, but the result had the same problem.  Oddly, the larger h.264 file I had also encoded worked fine in QT, so I've uploaded that version.  So, if you had problems with the smaller file, and have a "fat pipe" just grab the larger one, I suppose.

In other news: some of the sites in the links seem to be going content-crazy lately.  SMPS has been pummeling readers with articles in the month of January, including a daily series of SHMUP reviews.  HG101 has also greatly increased their update frequency to the point where I can't keep up.   Among the fascinating offerings are an almost pathologically detailed look at the 30 or so games based on the Astérix comics.  Yes, there are seriously 30 Astérix games in Europe!  They really love them some Astérix over there, I guess.


Also rising from the dead is a special, one-off new episode of Retronauts.   Oh, and by the way, Chrontendo gets a mention by Frank Cifaldi in the latest Games, Dammit! podcast on 1UP (it's at the very end of the podcast, BTW.) Thanks, guys!


In some non-video game related (but still plenty geeky) news, Red Letter Media released the long-awaited Revenge of the Sith review a couple weeks ago.  If any of you are not familiar with the "Harry Plinket" reviews of the Star Wars prequel films, and if you have any interest whatsoever by Star Wars, or were spiritually wounded by the awfulness of those films, I would highly recommend you view these, starting with Phantom Menace.   These are not mere "reviews" but insanely long, mult-part analyses of everything that went wrong in those films.  As such, they are far more interesting, well-written, and funny than the movies themselves.
Posted by Doctor Sparkle at 4:35 PM

I would also highly, highly recommend the reviews, done in a persona inspired by Buffalo Bill from Silence of the Lambs.

I had to demux the file and remux it to mkv for it to play without any problems, else I'd get video/audio desynch for some reason or other.

I grew up with the Asterix comics, and liked them, they have some edutainment values. Though if you read bello gallico by ceasar, it is put in some perspective... . But as you mention it, I see Asterix games coming out since...forever...but I just realized I never played one of them. The last one from Ubisoft was supposed to have some Ubisoft 4th Wall franchise jokes, but I never touched it anyway... . A roman in Splinter Cell outfit looks really silly.

That's exactly why I gave up on Quicktime years ago. For the life of me I can't comprehend why it's ever used for any purpose at all when there are so many good, reliable alternatives. Similarly, I also find the Modern Windows Media Player far too fickle to be of any use, but at least there isn't a clandestine mandate in place that all official theatrical film trailers are formatted in wmv.

I love Chrontendo, but I wanted to mention that I extra, extra love Chronsega. I had a Master System as a kid before I had a NES, and seeing all the old games again is fantastic, as well as the games from other markets that I never got to play. Thanks for all the work you put into the series, I love it!

Come to think of it, I don't see any reason why I couldn't do MKV versions in the future as well, if there are folks who like those exotic formats. It appears my encoder handles that.

Asterix, like Tin Tin, is just one of those cultural phenomena that refuses to take hold in the US. I remember seeing Asterix comics when I was young, and something about them - the art style, the characters - just seemed so unappealing. Even today, when I see Asterix, I realize the art is very high quality, but something about Asterix and Obelix's smirking faces makes me hate them.

Not to go off on another one of my tangents, but I noticed that Keith McNally's site has an MST3K style riff on Night Fright. This is an unremarkable 60s sci-fi horror film, but... it was dug up, retitled and released on VHS in the UK in the early 80s with one of the most wonderfully deceptive box arts ever:
http://tinyurl.com/etnboxart

Sorry, but I have a bit of a fascination with the whole UK Video Nasties thing. Those wacky Brits!

Yeah, thats a cultural thing, if you compare US-Comics with European comics you realize that the whole abilities of US-Heroes is high fantasy, with a Superman who can fly and punch the moon out of orbit, or Iron Man, a billionaire who single handedly makes world peace through superior firepower. Even Batman had these elements in the comics, he was very human, but in time his enemies became grotesquely high fantasy, like Clayman, Killer Croc or Poison Ivy.
European heroes are more derived from myths, and they have defined strength (which makes them heroes), but there attachment to normal people is essential for their role in the story. They have weaknesses, which they try to overcome, but have to figure out how to live with them.
I could argue some more, but I don't want to take up all the space...especially cause I think there are other guys on the interwebs which already blogged about this. And don't get me wrong, I really like US-Superheroes, and the people talking about them, but the difference in the idea of a hero in the US and Europe shines through if you compare the successful comics.
And in the end, its just a cultural thing

E-mail this web zone if you want a pizza roll.

Asterix, like Tin Tin, is just one of those cultural phenomena that refuses to take hold in the US. I remember seeing Asterix comics when I was young, and something about them - the art style, the characters - just seemed so unappealing. Even today, when I see Asterix, I realize the art is very high quality, but something about Asterix and Obelix's smirking faces makes me hate them.

I wouldn't blame you, though I loved some of those movies when I first saw them back in the 80's myself (the best film to check out is "The 12 Tasks of Asterix", which can serve as a starting point since it was an original story not adapted from the books). It was nice enough we managed to get one of those games released over here for the Genesis.

I don't mind the style/look of the comics at all, certainly a change of pace from the "Ligne claire" approach used in Tintin. At one point, there was a clash between both styles (Asterix representing "Comic-Dynamic", though another style also seen was "Realistic") that existed in Franco-Belgian Comics for decades.

Obviously Asterix is well loved, I'd be surprised too if people didn't know about it! Have a look, I write about it once in a while, still a big fan :). But now that you mention it, I think I'll look for the games as well...