Hello, everyone!  I hope everyone had a wonderful Labor Day.  For you folks outside the US, Labour Day or International Workers Day is usually a commemoration of the achievements of the working class in their struggle against capitalistic oppression throughout the last 100 years of so.  For us inside the US,  Labor Day means barbequing hotdogs, as per the instructions of our corporate overlords.  My chili dogs turned out fantastic, thank you very much.

Dr. Sparkle has been hit with a bad case of the existential ennui lately, which means a slowdown in production of new Chrontendo episodes. I've also been busy with a few things the last week or so. One of them is putting together a new computer.  One of the other things, unfortunately, was this: 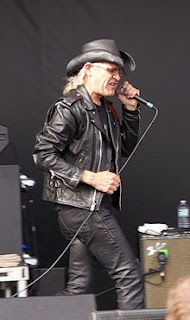 It was not as bad as this looks. I'll explain next post.

However, we do have something a little different today -- I thought I'd talk about a couple books produced by fellow retro-game enthusiasts.

Many of you will be familiar with Gamespite. The main site is filled with high-quality game writing and the forums are a haven for old-school video game/furries/yaoi fandom. A couple years ago, Gamespite honcho Jeremy Parish came up with a clever idea: release a series of quarterly collections of reviews/articles from the site's various contributing writers in book form, then publishing those same articles, one at a time, on the web site.

"Sippin' Sizzurp in my ride, like Three 5?" No, that doesn't quite work.

So far, GameSpite Quarterly (now GameSpite Journal) has reached its ninth issue.  The size of each issue varies, from #1's 150 or so pages, to #8's whopping 450+ pages. The meatiest two volumes, in terms of both size and breadth of content, are issues 5 and 8, which are reasonably in-depth looks at the NES and the Playstation 1, respectively. Each issue contains a series of articles about the console, arranged in roughly chronological order. Some articles are thematic; for example, Nintendo's legal battles with Tengen or the practice of importing NTSC Playstation games into Europe.  But most articles discuss individual games.  These can range in length from three sentences for Legend of Kage to five pages for the NES version of Strider.  While these books can't come close to covering every game for each system, they do manage to get in the major US releases, plus a handful of lesser known titles and imports. Each issue is profusely illustrated with black-and-white screenshots and promotional artwork.

The GameSpite books are very dedicated to their subject matter.  But if you want to see true obsession, you must turn to Hardcore Gaming 101's The Guide to Classic Graphic Adventures.  This thing is huge: 772 pages and weighing about 2 1/2 pounds.  Despite being in paperback format, its physical dimensions are that of a good-sized hardcover.  It terms of content, it covers around 300 games and is nicely illustrated with B&W screenshots; though like GameSpite Quarterly, the screen captures can be a bit dark in places. 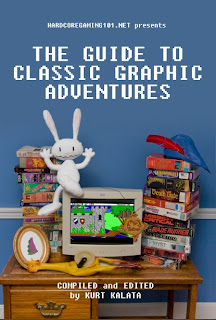 Not pictured: the heft of this tome.

The Guide focuses on the "classic" era of PC adventure gaming -- the mid-80s through the mid-90s.  Virtually every well known graphic adventure game of that time period is covered, including the oeuvres of LucasArts, Sierra, Legend, Interplay, and so on.  A few earlier games, such as the Zork series, and a handful of modern releases are discussed as well.  A number of writers contributed entries, but the bulk seems to be written by Kurt Kalata himself. The overall tone is evenhanded and non-judgmental; even the worst games are described as "disappointing" or "flawed." I would guess that years of playing adventure games teaches one patience and forgiveness.  Even the most well-loved games in the genre are filled with frustrating bullshit such as unfair deaths, impossible puzzles and sadistically frustrating action sequences.  Adventure game fans learn to put up with a lot. 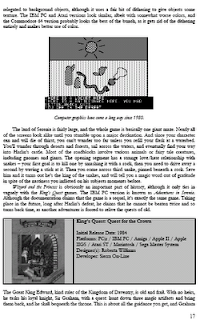 The book doesn't skimp on words.

Both Gamespite Quarterly and The Guide are not without their flaws.  As self-published books they lack a professional editor, which often shows.  Not that I'm complaining; it's beyond my abilities to proof-read a blog post of this length and not miss typos and errors.  To self-edit a manuscript several hundred pages long and catch every single mistake would be just about impossible.  Both books have problems with the most difficult word on the internet, "comprise."  I was actually a little thrilled when I saw it used correctly early on in The Guide but later usage was inconsistent.  Both books frequently (and exclusively) use "trope" in the modern, internet-y sense, but that probably bothers me only because I'm an curmudgeonly old bastard. 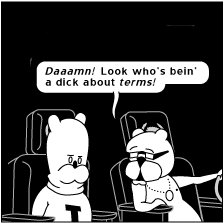 It is I who is being a dick.


The section on Star Trek games in The Guide contains the line "Like most great works of art, its appeal was not immediately recognized...." which is probably the most indefensible statement anyone has made about art, ever.  Of course, it was used in reference to the original Star Trek TV series, so perhaps it was intended to be read ironically, as way of poking fun at the pretensions of Star Trek fans?  GSQ 8 has a long and provocative article by Phil Armstrong on Breath of Fire IV, which goes against popular opinion and claims BoF IV to be the best game in the series and also the best Playstation RPG.  It's a great article, but is bizarrely titled "Ying and Yang."  Is that a typo or a joke that went over my head?  I know Parish has a weakness for puns, so I'm thinking that it was intentional.  Seriously, someone explain that to me. I feel really stupid every time I think about that title.

Despite such trivial imperfections, both publications get my most enthusiastic recommendation.  Quality books on video games are not as common as they should be. Most are amateurishly written small-press works, or general video game histories which rarely get into the nitty-gritty of the games themselves.  Or even worse, postmodern, academic books called "World of Warcraft and the Simulacrum: A Hermeneutic Perspective" or some such nonsense. Volumes of GSQ can be purchased on Blurb, and The Guide is available on Amazon, among other places.  The Guide even comes in ebook format for those of you whose limbs are not sturdy enough to hold a 2 1/2 pound book and sip a soy latte at the same time.

Incidentally, the various comments about Akira, the movie, have whetted my appetite to revisit it.   Maybe I'll like it more this time.

"Ying-yang" is just a non-standard spelling of "yin-yang." I realize "yin-yang" is more proper, but turning Asian dialects into English is always imprecise, so I figured there would be no harm done in going with the term Philip selected as his title.

Issue 10 is being designed for color, which should resolve the issue of dark images and muddy designs.

Thanks for the props!

I had been giving some thought to ordering some of the Game Spite Quarterlies and I think you have convinced me to try it out. That adventure game book sounds excellent as well. I'm not quite as big a semantics stickler as you seem to be, so I think I'll really dig it.

I must say, I find it heartening to hear that you too suffer from "existential ennui" - a phrase that some of my friends take umbrage with my using. I wouldn't, however, describe mine as an on-again, off-again case but more of a persistent, daily reality. Here's to getting over the hump and and more excellent episodes of Chrontendo!

Is that the roundball rocker himself, John Tesh?

Gamespite Monthly/Quarterly really is some of the finest video game writing out there. Everyone who writes for it is extremely interested in sharing their interpretations and opinions on all facets of video games, and despite the name its not a tear down zine at all, its nothing but love for an art form.

"Many of you will be familiar with Gamespite. The main site is filled with high-quality game writing and the forums are a haven for old-school video game/furries/yaoi fandom."

I...what? There's a bunch of divergent interests of the people on the boards but the primary focus is video games and other nerd media, not of a sexual nature. Wii-mote not made out of real gold. Sorry.

Maybe Armstrong is a fan of the Atlanta rap duo Ying Yang Twins? Has anyone checked him lately for dangerously high levels of crunkness? Protip: examine the teeth.

As for "existential ennui," in my case, that's basically a code phrase for the pathetic whining of a member of a generation of spoiled brat Americans, whose main problems are too much spam in their inboxes and not knowing how to beat that one level of Angry Birds. As opposed to our fathers and grandfathers - whose main concerns were not dying of whooping cough at age 8 and getting shipped off to South East Asia the day after graduating high school.

About the furry/yaoi/etc boards on Gamespite, I shouldn't have mentioned those. They are in the "invite-only" section of the forums, and are for "platinum members" only. You can only access them through a Tor onion router network, due to the "unusual" content. Let's forget I ever said anything about them.

I just like to correct the title, for I am german by nature (not just by citizenship, also by character) and I think at least some one is interested in the correct german spelling (though you came close Doc):
Herr Professor Doktor von Glitzer präsentiert: Videospielbücherkritik

Though Videospielbücherkritik is a word which is a bit too long for standard use in german, it would have been edited into a sentence: Kritik über Videospielbücher.
I hope the smartassery didn't bore anyone...

"Though Videospielbücherkritik is a word which is a bit too long for standard use in german..."

Wait a sec! Don't the Germans love long words, like
Rechtsschutzversicherungsgesellschaften? I thought you could just keep adding on more components to create compound words that are theoretically infinite in length. Someone should write a novel in German that's just one super long word.

You're right Doc, the german language has a tendency for long works especially as office language, or in legal aplliances. Though this is a trend which is not present in popular writing, the use of shorter words is avantgarde. These long words are a pool of funny inside comments about the german language, they are used for laughs nowadays. So I just post some for exactly this matter...=)

Dunno if you listened to the last Retronauts Doc, but Chrontendo was mentioned. Congrats.

Thanks for the shout-out!

And yeah, the Star Trek comment was meant to be sort of tongue in cheek. To be honest I don't like Star Trek much at all, although the first two adventure games were pretty alright.

It might not be on par with the high quality that 1UP or Jeremy Parish can muster, but I've been working with my own sites community to come up with something similar:

A professionally designed NES retro gaming mag! Doubt there's many of these around today.

There is a chance you're eligible to get a free $1,000 Amazon Gift Card.