Fear and Loathing in the Midnight Sea

Why do you hate me so much?

A bit of background: Irem's Holy Diver is one of those highly regarded "hidden gems" of the Famicom. It's an extremely cool game released only in Japan that has gained a cult following as a slick, well-made action title in the Castlevania mode -- a game that should have recieved a release in the West, but didn't. It's been one of the games on my radar; I've been looking forward to Holy Diver for some time. One of the pleasures of Chrontendo is discovering all these great games I've never played before. But it turns out Holy Diver is hard. Not Castlevania hard or Mega Man 1 hard or Ninja Gaiden hard, but "goddamn, why does this game keep killing me over and over?" hard. And "why is every frickin' enemy so difficult to kill?" hard. 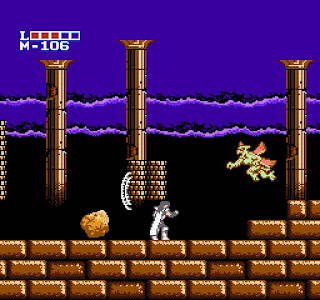 Despite this, Holy Diver is a very fair game. Its deaths are not cheap, like, say, A Week of Garfield. It doesn't help that the game requires judicial use of special abilities, which consume magic points. And I'm one of those guys who hates to use limited resources or special items, because I'm always "saving" them for later.  No matter how rough things get I always refuse to use my elixir or super-powerful attack because I assume the next battle is going to be even worse, and that's when I'll really need it.

Part of the problem may be that, unlike Ninja Gaiden or Mega Man,  I've never played Holy Diver before. With practice, it may become more manageable. Still, this is game that needs to be on all those "Hardest games of the NES" lists.

So, how many folks out there have played Holy Diver? Is it really as tough as I think? And while you're at it, what exactly is the song "Holy Diver" about? Why does it talk about tigers (which are black and orange) and then mention "a cat in black and blue?" Did someone beat up the tiger?

Bonus: What's with all the Sword and Sorcery/D&D imagery in the "Holy Diver" video?

What is the cosmic connection between the late Mr. R.J. Dio, a man whose life was undoubtedly stuffed to the brim with sex, drugs and partying -- and normal D&D fans, many of which have never known the sweet touch of female flesh?
Posted by Doctor Sparkle at 10:50 PM

Hey! I would never imply that Dio is creative! I'm perfectly aware that most hard rock music is derived from old blues songs!

Dio got his start in a band named Elf. Elf was discovered by Richie Blackmore of Deep Purple fame and became Rainbow or Richie Blackmore's rainbow. Then Richie Blackmoore fired everyone but Dio, things happened and Ronnie James Dio formed Dio.

Rainbow was famous for its fantasy themes, and he continued the tradition with Dio.

Ronnie just *really* loved his fantasy lyrics, almost as much as he loved making allusions to Rainbow songs in his later career. It wouldn't surprise me if he'd been asked to sign a D&D book or two at a show.

How could you not post the totally awesome cover?

So, I take it the kibosh was put on referencing Dio lyrics so that you could solely monopolize the goldmine?

I commented on Holy Diver's difficulty in the last post, so I'll instead make a quick note on the difficulty of Week of Garfield. It actually shares something in common with another difficult and legendarily bad game- Transformers: Convoy no Nazo. Or Comvoy no Nazo, if you're really hip. And that something is the down-button miracle.

The down-button miracle in Transformers is that it transforms your character into a semi truck when you hold it down. This is crucial in, for example, the first stage- the planes that so often crash right the hell into your chest in the first few seconds will instead fly right over you, completely unable to do you damage. Most videos I've seen of the game never seem to take much advantage of this form (including Shinya Arino, if memory serves), but it's actually pretty useful to your survival once you learn its quirks.

Week of Garfield's difficulty mostly hinges on your ability (or rather, inability) to find items to supplement your health or to throw at your enemies. It's also difficult because of the spottiness of the hit detection of your claws, but enough items will do wonders to parlay that. The down-button miracle is that it puts Garfield into Stray Cat Strut mode, which triggers the appearance of many otherwise hidden items. They can also be found by wildly jumping through the air and clawing, but good luck with that. Strutting around to find secret sausages and coffee will definitely slow your game progress down, but bear in mind you are playing a game about an obese cat who often tickles our funny bone through his love of lethargy and hatred of Mondays. Just relax, traipse around a little on your four legs, and just generally enjoy the finer things in life. The Week of Garfield will be over so quickly that you'll wonder just how you used to live life so hard.

Oh, and secret Garfield protip- the Fish Bones (another hidden item) drain your health. BUT if you eat one and it would take your life below zero... your health will fill up to the absolute maximum. Now you're playing with power!

My thinking is, considering "Eye of the Tiger" released just one year prior to "Holy Diver", Dio is insinuating his raw rock power will give it a "black-eye" of the tiger. The song sounds like it's in the same key and almost feels like it's going to launch into a medley of that song. Then again, all this butt-rock kinda sounds the same anyway.

I'd say A Week of Garfield is not so much hard, as it is very cheap and pretty boring. I personally got sick of it very quickly. However, I did not now about the fish skeleton trick - that sounds useful.

Matt - That could be it. Or it could be clue to Dio's rivalry with the Tygers of Pan Tang. Sort of an Eagles/Steely Dan thing.

I have Holy Diver, and I agree with you. The difficulty is really high and the game just loves to throw enemies at you. Great game though, and spot on controls.

Holy Diver, fair? Have you reached the boss for the level pictured above?

Well, its fair in the sense that deaths don't arise from bad hit detection or blind jumps. The arise from the fact that Holy Diver is just frickin' impossible. Like that rotating eye column boss: as long as you avoid every single one of the many projectiles it fires at you from almost point blank range -- you're fine!

Yeah, Holy Diver is really hard. can't make it past the third stage on a real console due to lack of save states.

I always thought the song was an allegory for drug rehabilitation?