When one thinks of the PC Engine, what comes to mind? Tons of obscure RPGs and visual novels? Definitely. But also, there is the shoot-em-up: Gates of Thunder, Blazing Lazers, Air Zonk, Soldier Blade, ... the list of amazing shoot-em-ups released for the console goes on and on. Perhaps no game system is so closely associated with the genre as the PC Engine/Turbo Grafx 16.  But legends don't happen overnight, and even the PC Engine was not born into shooter greatness. Chronturbo Episode 3 will feature four shooters, and none of them could be considered stone-cold classics. Two are actually sort of terrible!

In terms of semi-reputable shoot-em-ups, we have two games, Hanii in the Sky and Kyūkyoku Tiger. Hanii, from the obscure publisher Face, is one of the oddest shooters on the system. The plot involves the Shinto deity Izanagi, who along with his wife/sister Izanami, sired Japan. By siring Japan, I don't mean they were ancestors of the Japanese people*, but that Izanami gave birth to the actual islands that make up what is now Japan. 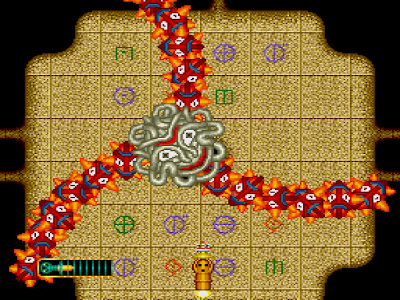 In the game, you control a Haniwa figure, who is following Izanagi's orders to blow up a lot of shit. Hanii in the Sky differs from most shooters by allowing you to rotate your laser cannon 360 degrees. Much of time, enemies come at you from the top of the screen, but if a squadron suddenly appears behind you -- simple rotate the canon to the rear and blast away. On top of this, but can obtain various upgrades and items, most of which must be purchased with cash obtained by killing enemies. It's a pretty cool game, though without using a turbo controller it will be impossibly hard. 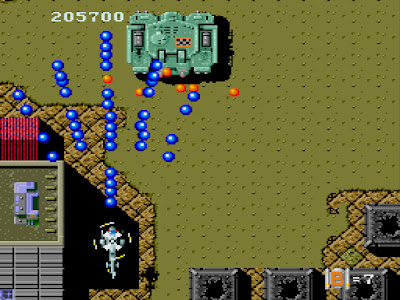 Kyūkyoku Tiger, from Taito is a rather bare bones port of the 1987 arcade game called Twin Cobra in the US.  Developed by Toaplan, Kyūkyoku Tiger is the middle game in the "Tiger" series, book-ended by Tiger Heli and Kyūkyoku Tiger II. It's just one of many military-themed shooters from Toaplan in the mid-late 1980s. We covered the gimped Famicom version of Tiger Heli way back in Chrontendo 12. Kyūkyoku Tiger is certainly a pretty huge improvement over that game, but it still falls well short of greatness, being somewhat bland and repetitive at times. 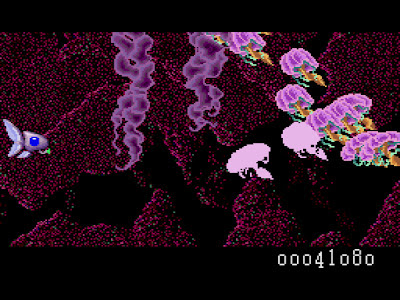 On the other end of the spectrum (specifically, the "crap" end) we have Pack-in-Video's Deep Blue Kaitei Shinwa and Aicom's P-47. Both are horizontal shooters and both are deeply dull.  Endless waves of fish (Deep Blue) and aircraft (P-47) fly at you with little rhyme or reason. Deep Blue goes down the enemy overload route, throwing far more enemies at you than you can possible kill. To compensate, you have a pretty decent life meter, which slowly refills when you stop firing your weapon.  In the hands of a more adept developer, this might be an interesting mechanic.  Neither Deep Blue nor P-47 offer much along the way of cool weapons, power ups or bosses.  While not exactly kusoge, both games are completely unremarkable and boring. For some reason, the only game out of the four to receive a US released was Deep Blue, published by NEC. 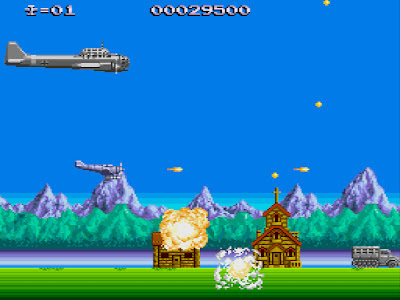 Also, a couple quick announcements. One, Dr. Sparkle is going on a brief vacation tomorrow. Once I return, I'll pour my energy into finishing up Chronturbo 3.

Second, I'm continuing to add older episodes onto Youtube, as well as playlists. There is now a Chronsega playlist, and a Chrontendo 1988 playlist which contains all the 1988 episodes. I'll create more lists for other years once the appropriate episodes have been added.

*However, the emperor has officially been considered the direct descendant of the goddess Amaterasu, at least until the post WWII era.
Posted by Doctor Sparkle at 10:32 PM

See, when I think TurboGrafx, I only think shooters. I'm pretty sure the whole console was designed around the purpose of having something slowly scroll upwards while a bunch more somethings fly downwards in a kind of sinewave pattern. Even the sound chip seems most comfortable with *PKEW PKEW TING!*

Is there something wrong with my brain considering I immediately assumed "siring Japan" meant birthing the actual land and not the people of the country?

Unfortunately the shooter angle tends to overshadow the other qality offerings of the PC Engine library.

Never having much interest in the design tropes of arcade shooters but being interested in opening the door to a whole slew of quality titles flooding my library helped me break through the uniform surface layer and partake of the varied core below.

Overall it is a worthy system, though I value its library above that of the Mega Drive it still cannot hope to touch the sheer perfection of the SNES library.

Turbo Grafx was one of my all-time favorite systems....
I can't wait for the next episode of Chronturbo.

Actively looking forward to the next episode. Seems the chronogaming scene is in the summer downturn. The only real action going on is over at the rpg consoler where there has been a flurry of recent posts and is currently playing Phantasy Star 2. Also sadly it appears pre sonic genesis is now offline and dead. And generation 16 is coming online slowly mostly due to the creators birth of a new baby it seems. I personally really look forward to seeing a lot of pc engine shooters as I will unlikely ever play them and it is a classic genre I enjoy that the PC engine did well.

Sean - No kidding. We haven't seen any action from Pre Sonic Genesis, Juggle Chainsaws, or Generation 16 in a while. Chronogaming breaks many a man.

Did you know you can shorten your links with Shortest and get money for every visit to your shortened urls.