One bizarre game to be featured in Chronturbo 5 is Super Albatross. This is one of three CD-ROM² games this episode.  The odd thing is that Super Albatross is a golf game, which seems like a strange choice for the CD format. Golf games of the era aren't normally full of visual flair. However, Super Albatross was created Telenet/Lasersoft, the same folks who did Valis II for the PC Engine. The developers chose to insert absurd Valis-style cutscenes between levels.

These anime-like cutscenes almost make Super Albatross seem like a parody of Valis II. The protagonist must win a number of rounds of golf against a series of goofy opponents.  Each opponent in introduced in a dramatic cutscene and their stats -- height, weight, and power -- are provided, just like in Valis II's boss battles. 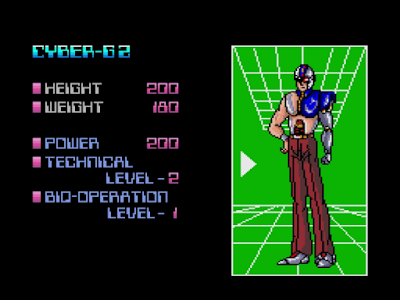 These animated cutscenes are done in the exact same style as those in Valis II, right down the same shade of green being used as the background. Unfortunately, the actual golfing part of Super Albatross is pretty lame, even by 1989 standards. 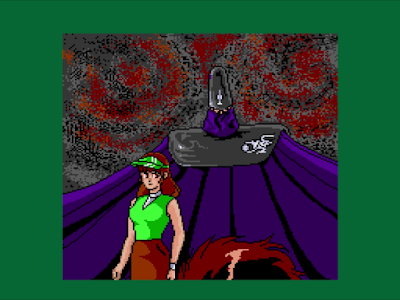 Chronturbo 5 has been almost completely recorded and will go into editing soon. Not sure of an exact date, but keep an eye peeled.

In the meantime, I've uploaded the second episode of the Video Nasties series. This one covers a well loved slasher film, The Burning. This movie is unusual in a few ways. It ended up on the nasties list due an error -- the label accidentally released the tape with the non-BBFC approved version. Also, there is a surprising amount of award-winning talent in this movie. Aside the various future Oscar, Emmy and Tony award winners who were involved, The Burning was produced by Bob and Harvey Weinstein (their first film production, in fact). Brad Grey, who is now the CEO of Paramount, was also involved to some extent.

Unlike some of the nasties, quite a bit of information is available on the background and production of the film, so I got into this in a bit detail.  Compared to Driller Killer, not too much psychological or artistic analysis is possible, since this was a completely mercenary project. Even the director admits to not having seen the movie since it was released. The main consideration seemed to be creating an movie with sufficient blood and nudity to keep the audience interested.

Check back for another update soon.
Posted by Doctor Sparkle at 2:20 PM

Always happy to see a new post on the Chrontendo blog! Thanks for all of the work you put into the videos.

Any hope of a new Beertendo post in the future? I really enjoyed the past beer recommendations.

I'm really looking forward to this. I'm a game developer so having insight into all of these games is really useful. I never miss a chance to plug Chrontendo to my friends as well.

A good-natured, two-month bump, since I'm looking forward to the new Chronturbo as well.