In our never ending quest to play every game released for the Famicom and NES home consoles, we present Chrontendo Episode 9.

It's another 15 games, this time from June through August, 1986. And you know what? We actually have a pretty decent selection of games this episode. An all time NES classic, Metroid is released for the FDS in August. Hudson and Konami also release a couple high quality titles. And there really aren't any absolutely terrible games this episode -- the worst I can say about Sqoon and Choplifter is that they are merely mediocre.

We are also seeing more and more original titles for the Famicom; only five titles this episode are ports of existing games. Namco checks in with three releases this time, including the rather ambitious Valkyrie no Bouken. Data East and Jaleco come off looking like slackers by comparison, with two uninspired arcade ports.

Of course, this shouldn't lure you into a false sense of security. The Famicom is not going to be all wine and roses from this point onward. FAR from it. In fact, Episode 10 will reveal a previously unknown world of gaming horror. And I cry tears of despair while thinking about some of the titles that will be unleashed on unsuspecting Japanese gamers during the 1986 holiday season....

Chrontendo's Game of the Month: 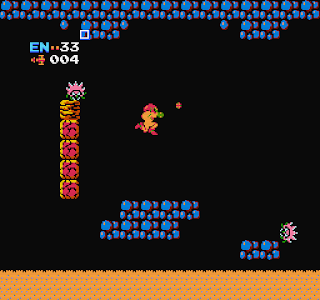 Nintendo follows up Zelda and Nazo no Murasame with another big release for the FDS, this time from the minds of Gunpei Yokoi and Yoshio Sakamoto. Metroid takes the sidescrolling platformer and moves it in an entirely new direction. Rather than the linear world of Mario and Luigi, Metroid's Samus Aran travels through a vast array of tunnels, caverns and corridors extending in all directions. Your job is to navigate Samus through Metroid's labyrinthine network of enemy-filled passageways, hidden doors and dead ends. While Metroid isn't completely non-linear, you are free to explore as much as you'd like. In fact, backtracking through previously explored parts of the map in order to gain entry to newly accessible areas is a major part of the game.

Metroid certainly takes a page or two from Zelda. In order to get very far, you'll need to upgrade Samus' life bar and offensive capabilities. Fortunately, every power up you find is free for the taking; you won't find any cranky old men running expensive shops in Metroid.

While nothing in Metroid is completely new - the idea of a freely explorable underground world goes back at least as far as Activision's Pitfall II - everything comes together into a wonderfully playable experience. Every aspect of Metroid is high quality: the atmospheric graphics, the character design, Hip Tanaka's excellent music, the spot-on controls. Nintendo must have had a lot of faith in Metroid's universal appeal, since unlike Zelda, they released almost simultaneously in both Japan and the US.

Other notable games this episode: 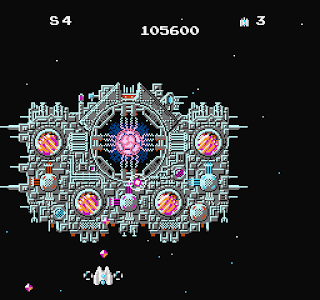 Hudson begins its run of excellent shoot-em-ups with Star Soldier, the putative sequel to Kemco's mediocre Star Force. Unlike almost every shooter released on the Famicom so far, Star Soldier is lots of fun, with fast paced gameplay, loads of power ups, bizarre enemies, and even decent looking bosses.

Konami releases in the first console title in it's long running Ganbare Goemon series. While not well known in the west, the Goemon games are quite successful in the Japan. This entry bears little resemblance to the later, weirder titles in the series, such as Legend of the Mystical Ninja, this is a well designed scrolling platformer with elements of exploration, hidden items, Zelda-esque shops, and even first-person mazes thrown in.

While the game itself was not particularly memorable, this Nintendo release has the honor of being the first NES game to released in the US only. While the Famicom light gun was not particularly successful in Japan, the NES Zapper was one of the major selling points for the still new system in the US. Nintendo, feeling the need for more Zapper games, developed this game specifically for the US market. Data East was the only publisher to immediately follow Nintendo's example, and it wasn't really until late 1987 that the first wave of US only titles would arrive. Thus, the longstanding tradition of releasing mediocre titles in the US while numerous outstanding games remain released in Japan only begins here. Congratulations, Gumshoe. 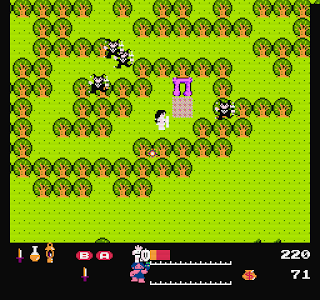 On that note, here is one Japan only title that we are lucky we didn't get. This Namco release is barely playable, but is notable as being the first really blatant Zelda clone. Well, perhaps that isn't completely fair. Valkyrie is an action RPG that borrows heavily from Zelda and Japanese RPGs such as Hydlide. But Namco did have the imagination required to steal elements from Ultima 3 that had not yet been used in any Japanese games. For example, the world of Valkyrie is broken down into multiple continents, and it is necessary to acquire a ship in order cross the ocean. Unfortunately, despite the creative thievery involved, Valkryie no Bouken still feels very primitive and unbalanced, and I lacked the patience to finish the game (despite having finished Hydlide!). Reportedly, it was a hit in Japan.

Known in the US as Ghost's 'n Goblins, this Famicom port was the first home version of Capcom's classic platformer to semi-accurately reproduce the arcade version. While Micronics' typically shoddy programming doesn't completely kill the game, Makaimura does fall a little short of your expectations. Despite the game's shortcomings, this would be one of the first third party releases for the NES in the US, hitting the shelves in November 1986.

Games which are, perhaps, not so good: 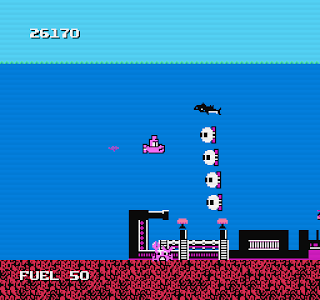 I can't quite put my finger on it, but there is something about this game I really dislike. On the surface, Sqoon is a typical horizontal shooter, albeit one with a sillier than average plot (Neptunians have melted the polar ice caps, completely submerging the surface of Earth under several hundred feet of water. Narikeen the pirate is called on the save the world with his bizarre little pink submarine. You do this by killing any aquatic lifeforms you encounter in the ocean and blowing up the Neptunians' underwater prisons). For some reason, the various elements in this game never quite come together into a playable experience. Irem would release R-Type to the arcades 13 months later, thus sending any lingering memories of Sqoon into oblivion.

Jaleco's port of the ancient US computer game. This game certainly has its fans. But for me, after having played Konami's near perfect conversion of Gradius for the Famicom, it is virtually impossible to go back to playing games like this.

Okay, this game isn't really bad. It's just that considering Nintendo's recent track record, I was hoping for better. Volleyball is merely an average sports title, co-developed with Pax Softnica. Presumably, this was rushed to the market in order to provide another game for the still-virtually-gameless Famicom Disc System.

Chrontendo Episode may be downloaded or viewed as a streaming video here.
Posted by Doctor Sparkle at 5:35 PM

Remember enjoying Metroid at the time I was playing it, but never did get to the end of that to notice who Samus was after all.

It's the bottles that contain fireballs. 10 fairies earns an extra life.

There are lots and LOTS of secrets in the game. The diamond items can be changed into different powerups with the wand. Some items appear if you place and remove blocks on certain spaces. There are multiple endings that can be earned depending on what secrets you find.

Correction on Metroid:
The game actually is fairly non-linear. You have to get the Morph Ball (or "Maru Mari"), one set of Missiles, Ice Beam, Bombs and High Jump Boots. I'm pretty sure these are the only essential items; everywhere else can be reached with these. You do have to kill the two bosses, and each time you receive 75 missiles, but those are mostly needed for the final area.

It was Super Metroid that drove home the obstacle-lock-and-powerup-key design.

Actually, they played this on Retro Game Master (aka GameCenter CX). I watched it a while back, although I can't remember if they beat it or not. I remember there being rather more to this game than it may initially appear. I remember them abusing all kinds of powers and level wars and stuff.

I'm skeptical about your judgment of that valkyrie game as being too difficult. In the video, it looks like the enemies mainly threaten you with fireballs, and many of the fireballs that hit you in the video don't look very hard to dodge, to me. Like you seem to be, I am a non-Japanese gamer who is somewhat amazed at the willingness of Japanese gamers of this period to bang their heads against what appear to be unfairly obtuse challenges until they somehow succeed. I don't know how anybody can stand, say, Legacy of the Wizard. But this particular game doesn't look so hard to me. Maybe for a kid it would be too hard... for a reasonably skilled adult, what we see here doesn't seem too unfair. (It might well be too boring, though.)

Also, I'm skeptical about your claims that Star Soldier is so much better than the other original Famicom shooters. The video doesn't seem to back that up; it looks like a pretty ordinary game. Maybe it's just hard to show, though.

(Not to be negative--this is an amazing and educational series on the whole!)