Yes, it is here at last, the special 10th episode of Chrontendo! Except that it is not really that special. In fact, it is pretty much a standard episode. Sorry. But, it does feature 15 more Famicom games from August and September of 1986! What's in store this episode? The first game in a beloved franchise from Hudson, the Famicom debuts from SNK and Victor, a very odd FDS title, an early Square release, and perhaps the first genuine kusoge game for the system. 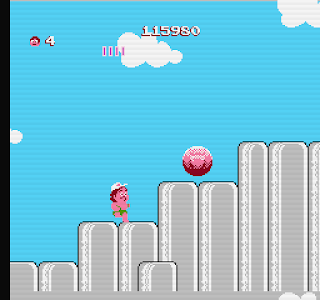 From Hudson we have this charming little side-scrolling platformer, which is actually an altered port of Sega's Wonder Boy. What's this?? A Sega game on the Famicom! How is this possible? Well, Wonder Boy was developed by a company called Escape/Westone who somehow retained rights to the game itself, even while Sega held the rights to the name "Wonder Boy" and all the characters. Thus, Hudson was able to release the game on the Famicom, courtesy of Escape, with redesigned character sprites. Oddly, Hudson based the new protagonist on real-life Hudson employee Toshiyuki Takahashi. For the US release, Adventure Island, the character name was changed to the inappropriate sounding "Master Higgins." Confusingly, both Wonder Boy and Adventure Island had several sequels, and Hudson continued to released altered ports of the Wonder Boy games while developing unreleated Adventure Island games. A very quick run-through of the Wonder Boy and Adventure Island series is given in Episode 10.

As for the game itself? It is pretty good, at least compared to other post-Mario platformers we've been seeing on the Famicom so far (see Super Pitfall and Musashi no Ken in this episode). While certainly derivative of Super Mario Bros, the game is charming, fun and the controls handle well. The major drawback is a certain degree of repetitiveness, as later levels are very similar to earlier ones. And like many games of this era, the end of level bosses are virtually identical. Overall, Adventure Island is quite a relief from the mediocre platformers being released for the Famicom.

While no one's idea of a great game, the newest installment in this Jaleco series does incorporate some new ideas from Mario-style platformers. If nothing else, Jaleco has cranked these things out on a regular basis - Ninja Kun in May '85, Ninja Jajamaru Kun in November '85, and now Jajamaru no Daibouken in August '86 - allowing us a clear view of the development of the platformer genre. This game features longer, more horizontally orientated levels, and boss fights after each one. And of course, the giant toad is prominently featured in Jajamaru no Daibouken (even though I referred to it as a giant frog in the voiceover. Whoops!) 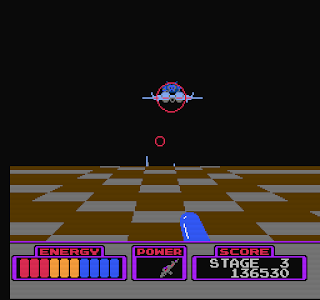 I swear that if I ever open my own greasy spoon diner, I'll have a breakfast special called the Hot Scramble. That just sounds like a delicious egg, cheese and sausage based breakfast. No such tasty treats are contained in this game, but you do get some decent cockpit-view shooting action, courtesy of Masanobu Endoh's Game Studios. That's right! A Bandai game not developed by Tose! Mark this day on your calender. I can only assume this game was a success in Japan, since it was followed about by about a thousand other Gundam games. I guess Chrontendo will have to tackle those eventually....

Two shoot-em-ups for the price of one! Granted, neither of these are really "cool" games, but they are both somewhat notable. ASO (Armored Scrum Object) happens to be the first Famicom release from SNK and also contains a very unusual word in its title. I'm sure I can count the number of times I've seen the word "scrum" used on one hand. This game makes the serious mistake of giving the player a number of very cool sounding power-ups (Flame, Nuke, "Sheeld", etc...) and then severely limiting the usage of those weapons. Super Xevious is a console only sequel - still a very rare thing in 1986 - to Namco's hit arcade game Xevious. Somehow, Super Xevious manages to add a few updates to the Xevious formula (power-ups, actual levels) and still fall short of the original game.

Games which angry up the blood with their sheer awfulness: 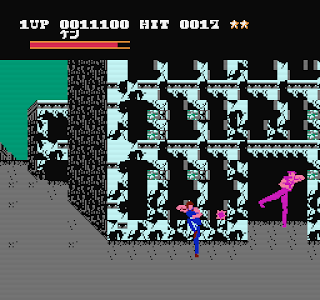 Hokuto no Ken!! Goddamn, this game pisses me off! Listening to my voiceover for this game, I realize I let Hokuto no Ken off way to easily. Really, the game is a bit insulting. Clearly, Toei was thinking that since it was based off a popular manga/anime (known as Fist of the North Star in the West), it would sell a certain number of copies regardless of how little effort was put into the game itself. And I'll be damned if developer Shoei System (aka Bears) didn't turn out one of the laziest games for the Famicom ever. Hokuto no Ken is one of the first examples on the Famicom of "kusoge"; that is, a shitty game. Kusoge hold a certain fascination for many Japanese gamers, and I will admit that when playing Hokuto no Ken, I find it hilariously awful for about the first minute. After that, the hatred starts to set in, and I curse Toei and Shoei System for ever releasing this thing. Seriously, it's like they came over to my house, left a steaming turd on my front porch, and then ran away.

On a related note, we will get to see one of the most mind-warplingly awful kusoge games in Episode 12.

Well, Pony Canyon went ahead and let Micronics develop a new entry in the beloved Activision series. Way to go, guys. From a purely technical standpoint, I suppose Super Pitfall is not that bad. However, this is a fine example of taking a perfectly acceptable idea way too far. While games such as Zelda and Metroid used the idea of hard-to-find secrets and hidden items to enhance replayability and reward resourceful players, Super Pitfall uses those concepts to completely kill the game. Super Pitfall is essentially a remake of Pitfall II - your goal is to find your niece, her pet Mountain Lion, and the Raj Diamond. But, in Super Pitfall, every item you need to complete your quest is invisible. That's right, all the keys, replacement ammunition, quest items and completely invisible and found by jumping while standing next to them. In one case, the entrance to the next level is accessed by jumping into a particular enemy! And there are no clues anywhere; it is simply jump, jump, jump until you just happen to uncover a necessary item. Unfortunately, this particular theory of game design - artificially extending a game's length by simply hiding key items - will continue to be a hallmark of bad games for the Famicom for some time.

While Ghostbusters was a popular, but not particularly good Activision game for US computers, this Famicom port is another matter entirely. The final level must go down as one of the worst levels ever in video game history. Your three Ghostbusters (Ernie Hudson's character is conspicuously absent from the game) must march up innumerable flights of stairs in order to meet the final boss, Gozer. However, this is accomplished by hitting the B button once for every step you wish to take. Thus, your characters move at an almost comically slow rate, while being attacked by impossible-to-avoid swarm of ghosts. Really, it is worth playing the game just to see how badly conceived this level is. I suppose this was the beginning of Activision's slow slide into irrelevance in the late 80s and early 90s, prior to their recent phenomenal turn-around.

Musashi no Ken: So-so platformer from Taito based on (surprise!) a manga/anime series.
King's Knight: Baffingly weird vertical shooter with a fantasy theme from Square.
Koneko Monogatri: Based on the film released in the US as "Milo and Otis." A cute and simple platformer.
Space Hunter: Incredibly, a mere month after Metroid, Kemco released this game about a female "Space Hunter." Unlike Metroid, this game is not good.
Sky Kid: Port of Namco's Choplifter-like horizontal shooter.
Banana: First Famicom release from Victor. A decent puzzle game.
I am a Teacher - Super Mario no Sweater: What the hell? An instructional knitting disk for the FDS?

As always, Chrontendo Episode 10 may be downloaded or streamed from archive.org here.
Posted by Doctor Sparkle at 7:01 PM

SUPER PITFALL
Being reminded the Angry Video Game Nerd ripped into this one a while back (and best deserving of that).

Being reminded there was a Pitfall cartoon as well that was part of the "Saturday Supercade" cartoon series that aired in the 80's as well (featuring a very cartoony Quick Claw)...
http://www.youtube.com/watch?v=WoRKA2Std6A

GHOSTBUSTERS
Still amused by it's closing statement that only exists on the US release that the Japanese version didn't include with it's ungrammatical statement.

It is my first time here. I just wanted to say hi!