Yes, Chrontendo Episode 16 has been endlessly delayed. The delay was so epic, it had to be subdivided into a trilogy of delays: hard drive crash, holidays/heating problems, and software issues/loss of speaking voice. I'm not sure my voice has completely recovered yet, so I apologize for the rough vocals that accompany a couple of the segments. Head on over to archive.org and download or stream Episode 16.

Yet, it is finally here. And with hesitation, I'll reveal that it is sort of a "special" episode. First of all, a few episodes ago, I mentioned I'd do a brief wrap-up of 1986. This has finally arrived in the form of segment covering video games from 1984-1987. It's divided into four subjects: US computer games, Japanese computer games, arcade games, and console games. Naturally, it lives up to Chrontendo's typically low standards. Secondly, Episode 16 documents a very dark day for the Famicom, namely, March 27, 1987. While there have been quite a few bad games produced for the system, the powers that be contrived to concentrate a whole lot of sheer awfulness into that one day. March 27 even radiates a certain amount of horribilosity, and a few bad games were released immediately before and after. The stink of this day permeates the entire episode, which teeters dangerously close to being an all-kusoge episode. Luckily, a few good titles round out the collection.

Speaking of which, we will now place the laurels tenderly upon the brow of our favorite game this time around: 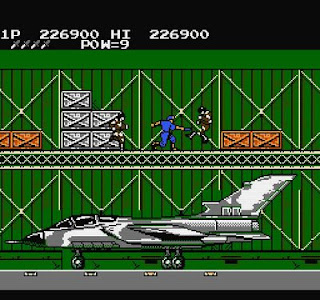 Konami once again dominates this episode with this port of their 1985 arcade run and gun (or perhaps run and stab.) Armed with only a small combat knife, the titular characters takes on an entire Soviet-style military base in order to destroy a "secret weapon." While substantially reworked for the cosole release, Green Beret is somewhat old-fashioned by 1987 standards. No hidden items, RPG-elements, life bars, shops or cranky old men spouting mysterious advice; instead Green Beret is a pure example of simplicity done right.

Episode 16 is not exactly loaded down with quality games, but there are a couple other notable titles to be found. 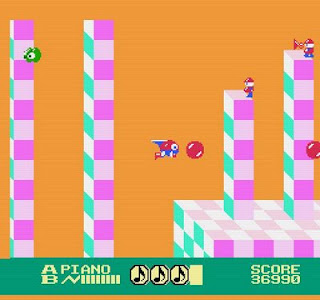 It's finding games like this that make chronogaming worthwhile. Unlike pretty much anything else released for the Famicom or FDS, Otocky is a music-based shoot-em-up from Toshio Iwai, the man who created Electroplankton. Firing your weapon generates musical notes, thus you create the game's soundtrack as you play. This is the exact same idea behind the 2001 Dreamcast/PS2 title Rez; Otocky is very much a game ahead of its time. While not nearly as sophisticated as later interactive music titles, Otocky is loads of fun to play.

The other big Konami release this episode, Goonies II was an early NES favorite and one of the first Metroid-esque games released in the US. I will admit, I don't care that much for Goonies II. I find it suffers from repetitive, confusing levels and relies too heavily on finding quest items that are arbitrarily hidden throughout the game's huge network of caverns and basements. Still there is no doubt that Goonies II stands head above similar dreck such a Sunsoft's Wing of Madoola.

Bad games? Kusoge? Episode 16 is full of them, starting with the four titles released on March 27. 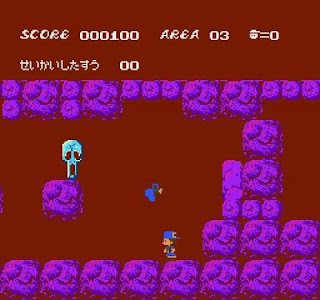 Acclaim alert!! Actually, while this was released by the notorious Acclaim in the US, the earlier Japanese release was from Pony Canyon. And, of course, it was originally a Commodore 64 title, developed by Action Graphics and published by Epyx. Either way, it is a nearly unplayable variation on Konami's Track and Field, burdened with ugly graphics and heinous control schemes.

Another US computer port, this time from Kemco and based on 1985's Spy Vs. Spy: The Island Caper. It's an inferior version of an inferior sequel to a decent title. 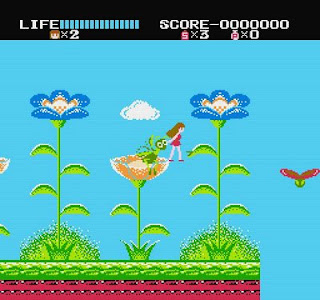 The second Famicom game from Japanese toy manufacturer Takara, Lost Word is based around the popular-in-Japan Jenny doll. Jenny is essentially the Japanese Barbie, and originally was even sold under the Barbie name for a while. The Jenny game is a fine example of Kusoge. It features the standard overworld/sidescrolling platforming setup, and will provide hours of fun as Jenny gets attacked by dogs and repeatedly plummets to her death while jumping from one platform to another. Its about as fun as Takara's earlier Transformers game.
City Adventure Touch - The Mystery of Triangle

Another Pony Canyon release, this time based on the high school and baseball team themed manga Touch. City Adventure Touch is somewhat notorious in Japan for bearing absolutely no resemblance to the source material. The original manga was your typical quasi-realistic soap opera stuff. As for this game, I have no idea what the plot is supposed, but your characters roam around the city fighting elves and robots. Sadly, it was developed by Compile, though comes nowhere near the quality of most of their work. Much like Rare would later, Compile seems to occasionally turn out the quickie hack job in exchange for an easy paycheck.

An utterly baffling kusoge title from Victor Musical Industries. You control two 80s fashion victims/would-be pop stars, as they make their way from Japan to New York. Along the way, they mercilessly kill every human being that crosses their path, by singing them to death! Not the best way to build up a fan base.

From the animated feature of the same name, Dirty Pair concerns two sexy female space cops. Jump, fly and shoot your way through four dull levels, while picking up a variety of random objects such as perfume bottles and headbands. Like pretty much every other bad platformer, Dirty Pair features clunky controls and unspired level designs.

Damn! That's a lot of bad games in one episode! Fortunately, their are a few games in Episode 16 that are merely mediocre or have some interesting features.

A port of a David Crane/Activision 1984 computer game, this oddball release is barely a game at all. The original US version was completely original and ahead of its time. An early god game, Little Computer People was a direct influence on The Sims. For this Japanese release, Square has stripped away much of the appeal and interactivity; the resulting game is pretty pointless. Still, ATM has cute graphics and sound, and exudes a certain "What the Hell?" charm. 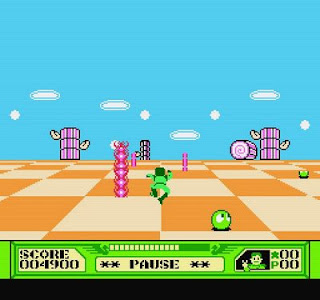 The earliest Square game to get a US release (by Acclaim!) Todibase Daisakusen steals blatantly from Space Harrier, though is not nearly as fun to play. It is notable for a few things. It was created by the team of Hironobu Sakaguchi, Nobuo Uematsu, and Nasir Gebelli, who would later go on to Rad Racer and Final Fantasy. Also, it was had a special 3D mode and was sold with 3D glasses. Lastly, the game is quite impressive from a technical perspective and was certainly the most convincing use of pseudo-3D in a console game up until that point in time.

Law of the West

Yet another port of a US computer title, this time of Accolade's fondly remembered dialog based adventure game.

And there we have it, another 15 games. As for Episode 17, a big chunk of the work is already done. We'll definitely see some higher quality releases the the next time around. This includes one all-time classic from Tecmo, as well as unreleased-in-US games from Capcom and Konami. There will also be a few truly bad games, such as - brace yourself - a sequel to Kinnikuman/M.U.S.C.L.E.

Errata: What would an episode of Chrontendo be without a few mistakes? During Sanma no Meitantei, I refer to it as the last game being covered that episode. Whoops! There are two more games after Sanma.

Posted by Doctor Sparkle at 8:37 PM

hey, what's the thing with ussr in sports games? is it the himh you like to hear? actually it gave me a little laugh in previous episode (it was a hockey), when you chose ussr team. anyway the winter sports is really horrible, but they did the nutcracker symphony for figure skating. that surprised me.
p.s. following your chonogaming for almost a year and only got to this episode this far. really big thanks to you for these videos.

So do I choose USSR a lot in these games? Must be a subconscious thing. It's certainly not the Hymn that's the attraction. If you ask me, they should have stuck with the Internationale as the national anthem. Yes, I agree that those Epyx sports games are pretty bad. But the computer versions were hugely popular back in the 80s.

I just thought it is worth mentioning that an earlier NES game, Banana, actually did something vaguely similar to what Otocky did. Namely, one music track would only play while you're walking.

I'm really enjoying this so far. I found out about this not long ago and am marathoning it now :)

Johan - excellent point with Banana. For those who don't recall, Banana is a Dig Dug like game where you control a tunneling mole and his wife, covered in Chrontendo 10. There is a simple little melody playing at all times, but whenever your character moves, a second tune starts is layered on top, thus giving a certain interactive aspect to the music.

TOUCH
It does seem like a loss for however intentions they had coming into this game. Probably would've been better off doing one for "Kimagure Orange Road" given the few kids with ESP in that show.