Something a Little Different

The muses have inspired me to try things a little differently on this blog. Being away for so long made me cognizant of one little fact: I only post when a new episode of Chrontendo is ready. However, I'm aware this is not the best way to run a blog. Personally, I get all antsy when I blogs that I like post irregularly; I assume that others out there in cyberspace might feel the same way.

To this end, I've decided to post more updates and previews of upcoming episodes. After all, countless other individuals use blogs or Twitter or whatever to detail the minutiae of their lives every half hour. I figure I can put up something about videogames more frequently than once a month. (Going off on a tangent, one fascinating train wreck of a blog I discovered recently was that of faded TV celebrity Roseanne Barr. Not only are the entries often certifiably bat-shit insane, but also amusing frequent. A lengthy rant will be followed an oddball post or link a mere minute later. As a testament to the power of fame's spotlight to warp the minds of those caught in its glare, this blog is quite invaluable).

So... one charming little game I've played for Chrontendo Episode 17 is Relics: Ankoku Yousai (Relics: Dark Fortress). Relics has held a certain fascination for me ever since I first booted it up. Upon encountering the rather solidly designed space-suited character, the subterranean sci-fi environment, the black backgrounds, and the slightly eerie music, my first thought was, "Wow! An obscure Metroid rip-off! Fantastic!" 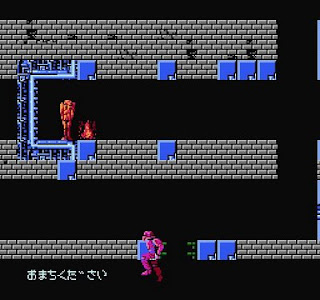 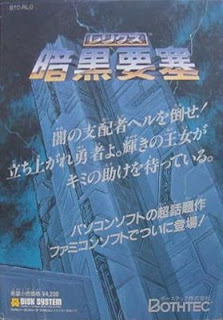 Bad hit detection and the infamous loading message
Disappointment and puzzlement quickly set once I attempted to actually play the game. Relics is vaguely Metroid like in structure - explore vertical and horizontal passage, find hidden passage, fight a boss, gain additional abilities - but in terms of mechanics, it resembles dragging a pillowcase of wet sand up a stairway. Your character is alarmingly sluggish and difficult to maneuver, and the game is beset with pauses while the next screen loads every few seconds. 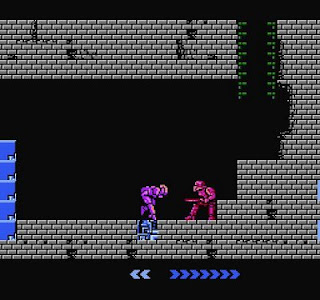 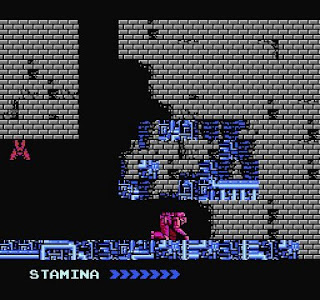 As it turns out, Relics: Ankoku Yousai is a sequel to a 1986 computer game released for the NEC PC-88, FM-77 and the MSX computers. Surprisingly, the MSX version had a European release, and seems to have a small following among MSX aficionados. Footage may easily be found on Youtube. Even more surprisingly, publisher Bothtec had announced Relics: The Absolute Spirit for the XBox a few years ago, but this title was never released. 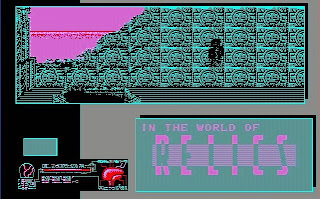 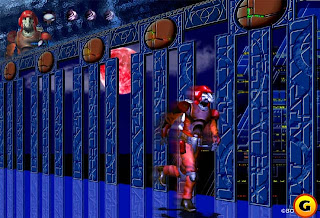 Relics for PC-88 and screenshot of unreleased XBox game

All in all, the FDS Relics is a wasted opportunity. The MSX had an interesting premise, the FDS release looks quite nice and has great music. But horrible controls and programming render it virtually unplayable. And about the music - Relics is the first soundtrack from Masaharu Iwata, who would later go on to compose music for the Ogre Battle series, Final Fantasy Tactics, FF XII, and many more.

Relics will be covered in Chrontendo Episode 17, which will probably be done in the next week. Check back soon!
Posted by Doctor Sparkle at 7:31 PM

Sounds good. Looking forward to it.

Nice game. I liked it.