DR SPARKLE HERE. I FORGET TO TELL YOU SOMETHING!

Thats right, I was going to talk about Metal Gear. But first, a few quick updates. Unless it's just me, the "recent comments" bar now seems to be working. Of course, as soon as that was fixed, archive.org starting having problems. Namely, the downloads were not being counted for around a week. Now that's running again, so we're at "all systems go" for the time being.

A brief update on Chronturbo: the first episode is currently taking shape. Due to the PC Engine's first couple years not exactly being jam-packed with games, this episode will be a bit shorter than average - about 12 titles will be covered. 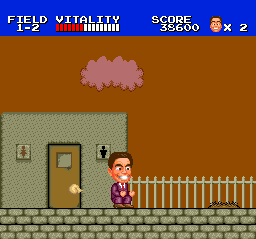 Additionally, there are a couple other little projects I'm working on - though nothing too exciting. First up is a complete re-recording of Chrontendo Episode 1. That episode sounds horrible and awful for some reason, and I'd like to get it more in line with later episodes.

So about that Metal Gear - its an odd little game, isn't it? Certainly, among the "classic" NES titles, MG has very little critical consensus. It's clearly a groundbreaking game, and light years ahead of the majority of 1987 Famicom/NES releases. Yet a surprising number of folks really seem to hate it. Part of this has to do with the notoriously sketchy translation ("THE TRUCK HAVE STARTED TO MOVE!") But the widespread availability of the superior MSX2 game has also led to a drop in the console MG's stock. 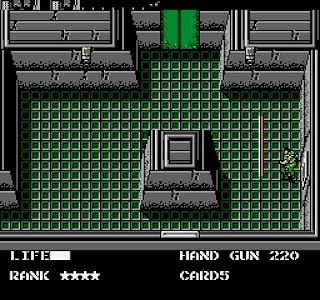 There's definitely something to this. The MSX MG is the better game. Regardless of the rather baffling changes made for the console release, it's still 90% the same game. The Famicom Metal Gear is still a highly original, well designed, and addictive video game, despite its not having the official Hideo Kojima seal of approval. Perhaps Kojima's distinctive, forceful and very public personality has led to modern day critics attempting to apply some sort of half-baked variation of auteur theory to his video games. Those who tend to align themselves with Kojima on such matters, might view the Famicom Metal Gear as the illegitimate offspring of Kojima's original creation: something that should be shunned in favor of the MSX game. 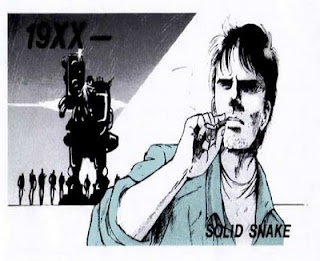 Not that I don't give Kojima credit for making a great game. But Metal Gear is clearly a game in the Konami style; it's foolish to think that it sprung, Athena-like, from Kojima's head fully formed. Its just as much the descendant of King Kong 2 or Ai Senshi Nicol as it is Kojima's brainchild. One often sees writers give Kojima a lot of credit for making Metal Gear a top-down non-scrolling game, since the MSX was not capable of smooth scrolling. Yet that was the very same thing Konami had been doing with other games for the last couple years! 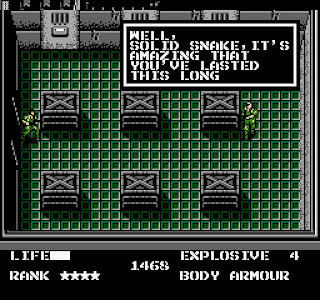 I hope no one is going to interpret this as Kojima bashing, or anything of that nature. I'm merely trying to place the Famicom Metal Gear in its historical context - as one in a series of high quality action adventure games Konami released for the system. Placing each game into its historical context, is, after all, what Chrontendo is all about.
Posted by Doctor Sparkle at 7:13 PM

For what it's worth, I'm among those that pretty much hate Metal Gear, but it's most definitely not -- as you alluded -- out of a sense of Kojima fandom. I pretty much hate the Metal Gear Solid series, too. For whatever reason, the juxtaposition of stealth military combat that takes itself so seriously, populated with absurd situations and personalities just doesn't gel for me.

In the case of the NES "classic," I just hate it because even at a time when the obtuse nature of events like jumping into thin air to find a block that produces a mushroom good for an extra chance -- or blowing a flute "where fairies don't live" to uncover the entrance to Level 7 -- all made perfect sense, Metal Gear totally baffled me. What's worse, while I was completely stymied, it also punished me brutally. There was no sense of worthwhile progress, accomplishment or even any pleasure to be found, only torment punctuated by insult and harsh consequence.

Once I made it to the first pitfall trap, I was done forever.

Finally a fella speaks out, about the atrocities of the Metal Gear (Solid) franchise. I fully understand your points, and the only thing I think is interesting, is the breaking of the fourth wall, that Kojima did, and till now is far too little used in games, which gives it an avantgarde touch.

Don't get me wrong, I really like stealth shooters, I had very much fun with the SPlinter Cell series, or the stealth sequences in Deus Ex, but maybe I am not "japanese" enough to get the Metal Gear Stuff

I'm a fan of the series, but not the NES version. You're too quick to assign motives to me that simply aren't there.

I simply don't like the game because I wasn't having any fun. Full stop. That's the only reason I need. The "I FEEL ASLEEP!" translation wasn't nearly as important as the brain dead dog punching, truck teleporting intro. Watching the youtube playthroughs does nothing to assure me I'm missing out on anything special later on.

As for your casual dismissal of Kojima's influence on the game - how many people were fitting interesting stories into games in this time frame? How many stealth based games were to be found in Japan? How many games are as polished as the MSX original? By your measure, I could port God of War 2 over to the Nintendo DS, rewrite the script in crayon, replace all the best boss battles with cliche cyberdemons and hellfire, and nobody could complain because it's still better than Imagine: Babyz.

Samael, there's good reasons and bad reasons to not like games, but if someone doesn't find a game fun... there's really no arguing with that. And the NES MG is a game which sometimes walks the knife's edge between fun and not fun. People tend to land on side or the other.

I don't want to minimize Kojima's influence on MG, but instead point out that its a little silly to hate the NES MG simply because it didn't have Kojima's stamp of approval. Some folks call the MSX game a masterpiece while calling the NES port a turd, despite the fact that after the NES' first awful sequence, they are 95% the same game.