Sorry folks, for discussing non-videogame subjects in this blog, as I am going to do today.  Hopefully, everyone approves the freshly released Episode 38?  I'm still hard at work on Chrontendo, but over the last few days I've been distracted with an animal related matter.

A couple days ago a received a late night call from my mother.  She was on the verge of hysteria, since her two dogs had captured some sort of animal behind her backyard shed.  She was concerned that they were in the midst of mauling a neighbor's cat or perhaps fighting a racoon.  For those of you who have not had face-to-face experience with raccoons, please note that, while cute, they are larger than you might imagine them to be, and are capable of blinding or even killing a medium sized dog.  I rushed over and was able to squeeze behind her shed and drag the dogs off.  Once I got a hold of a working flashlight, a I went behind the shed to see what sort of animal it was and found a tiny kitten lying on the ground.

One of the dogs had blood on his face, and my first concern was that the dogs had either maimed or trampled the kitten.  The kitten was still alive, but I couldn't tell what sort of condition it was in, especially since it was completely covered in dirt and mud.  Using a pair of leather work gloves, I picked her up, and brought her into the light.  We weren't sure if the kitten was feral or domesticated, but at this point the cat was in deep shock and didn't resist.   We didn't see any blood or injuries on her, but her eyes were glazed over and her tongue hanging out.  We weren't sure she was going to make it, but we covered her with a blanket in an attempt to keep her warm.  Eventually, she seemed to snap out of it a bit, so it was decided to bring her back to my house and set her up in a pet cage. 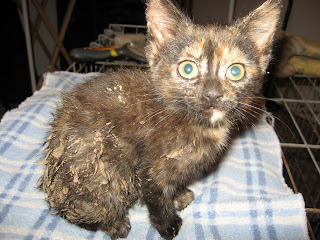 After getting most of the mud off her front end.

By the next day it was clear she was a tame kitten and would let us handle her.  We were pretty sure she didn't have any broken bones.  While the presence of a strange animal in the back yard must have set my mother's dogs off, it seemed clear they hadn't been trying to hurt her.  We tried to get as much mud off as we could, and the next day gave her a bath.  It turns out the thing is pretty darned cute. 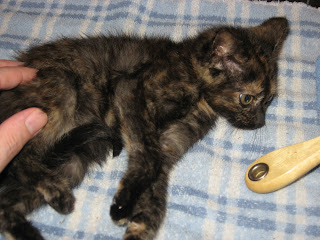 Cleaned up and looking precious!

At this point, we are going to make a poster and put it up around the neighborhood, in the off chance that she actually belongs to someone.  However, I am hoping that end we up keeping her, as she is just as sweet and adorable as you would imagine.  My wife does not approve of this name, but I am calling her Mudflaps.  If the next episode of Chrontendo is delayed at some point, it's probably due to Mudflaps suddenly leaping onto the keyboard while I'm in the middle of something.
Posted by Doctor Sparkle at 4:08 PM

I indeed do approve of the newest episode of Chrontendo. I especially loved the fairly extensive computer games round-up. I'd love to see more of this sort of thing in the future. I know you've done the arcade and PC round-ups in the past but this one felt meatier for some reason; maybe it was longer than usual?

The kitten is too cute. You should probably make it the Chrontendo mascot. You could make Youtube videos of it that lure unsuspecting folks to the blog.

In the future I see very awesome Chrontendo related LOLcat captions. For your inspiration: http://icanhascheezburger.com/

As for Ep. 38: rocked as always. I don't know how much more i can praise your work, just know that I constantly watch retro-gaming content in the web, and I will always come back and watch the new Chrontendo, cause the format is much more thought out and very well executed. I think we all realize how much work you put into it, and are glad with your informative and educated take on the subject.

Just read the update Dr.S. I havent seen episode 38 yet (Gonna be downloading it at a friend's house later) But what a lovely Kitten, I hope Mudflaps get's to stay with you. It couldn't have wished for a better rescuer!

Did you figure out how the dog got blood on its face? They might have been fighting (and driven away) the kitten's mother.

Don't want to name the cat ChronKitten or some such?

Ditto to what gayllS said, with the added note that I advertise Chrontendo constantly over at Final Fantasy Shrine.

Thanks for sharing your cat story. Did you have the kitten checked by a vet for internal injuries and possible diseases?

As a fellow cat lover, I really appreciate what you did. Well done. What a handsome little devil.

My mother took in a skinny little stray last winter, and now he he grown into a monster. He is quite plump and sleek, and the friendliest and happiest cat in the whole world who loves nothing more than to have his fat belly scratched.

I want to see a spin-off blog featuring the daily exploits of Mudflaps.