Hello everyone.  Sorry I've been out of commission for the last week or so.  Things have been busy in the Sparkle household lately, and yesterday was my wedding anniversary.   And I just saw that darned Super 8 movie today!  So, I just wanted to get in a quick word to let you know I'm still here.

I would like to point on a recent and very interesting article from Wired on Super Mario Bros 2.  If you recall Chrontendo Ep. 20, you know I'd become pretty dubious regarding the standard story of SMB 2, as is often repeated on the internet.  The narrative generally goes something like this:  we see Howard Lincoln or some other NOA executive sitting behind his desk when a package arrives from Japan.  Said package contains the anxiously awaited  Super Mario Bros 2, which Lincoln enthusiastically shoves into an FDS, dollar signs flashing his eyes.  A moment later we hear his voice thunder throughout the halls of Nintendo's Redmond offices,"What is this crap?!  No kid in America is going to want to play this!  It's too hard!"  Fuming, he flings the disk into a nearby waste basket.

Sometime later, Lincoln, Arakawa and a few others are still bemoaning the loss of their treasured cash-cow, Mario.  Suddenly, some bright young executive has an idea!  "Why don't we take some other game and release it as Super Mario 2?"  Grabbing the top disk off a stack of recently arrived Japanese releases, he says, "How about this one here?  It's, uh.... Doki Doki Panic.  It looks like it has running and jumping and stuff."   "Brilliant!" shouts Lincoln. "Quick, have one of the programmers hack some Mario sprites into this thing.  Those stupid kids will never know the difference."  Lincoln and Arakawa then commence puffing on their cigars between bouts of Satanic laughter.   The moral of this story is: you got played, chump. 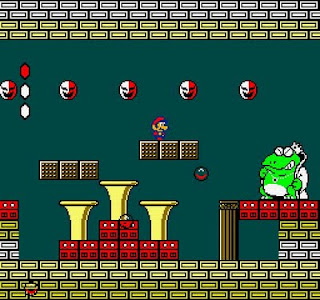 Everything you see here is a lie.

The problem with this story is that it overlooks the fact that the Doki Doki Panic/SMB 2 creative team comprised the key players behind the first Super Mario Bros.; and the game greatly resembles SMB; and that creatures from SMB 2, such as the Bob-ombs, were immediately integrated into the official Mario canon.  In Chrontendo 20 , I surmised that due to the amount of money and talent behind Doki Doki Panic, someone at Nintendo must have realized during the development process that it would eventually get a US release, and that this release wouldn't feature the Doki Doki characters owned by Fuji TV.

Well, the article in question is based around an interview with Kensuke Tanabe, the actual director of Doki Doki Panic/SMB 2, and it goes into a good deal of background on the game.   It turns out it originated as an uncompleted game from Nintendo EAD that was intended to be similar to SMB, only with vertical levels.  At some point, Miyamoto assigned Tanabe to work on a new game based on this concept.  Miyamoto later recommended adding traditional horizontal scrolling to the game to make it more "Mario-like."

The chronology is not discussed in any detail, but at some point, a deal with Fuji Television was signed, and Tanabe was told add the Doki Doki characters into the game.   For the US version, Mario characters were used instead, since as Tanabe states: “We knew these Fuji TV characters wouldn’t be popular in America, but what would be attractive in America would be the Mario characters.”

One thing to remember is that at this time, Nintendo did not always design games with particular characters in mind. Nowadays, when a game like Gears of War is being created, the developers are already thinking ahead to a sequel in the event that the first game is a success.  However, back in the 80s, the game idea was often designed first, and then characters added later.  The first Kirby game is a fine example of this method.  I also vaguely recall hearing that one of the Zelda games was not originally conceived as a Zelda game, but that it was incorporated into the series midway through the development process.

Anyway, the article fills out some of the gaps in the history of Doki Doki Panic/SMB 2, and shows the story behind this game is a bit more interesting than most people thought.  You can read the article here.  Definitely check it out if you have any interest in SMB 2.

For those who are wondering, Mudflaps the Kitten is fine.  She is currently behaving as any normal kitten her age would - meaning she's running around like an idiot all the time.  A poster wondered about the blood on my mother's dog's face.  They were caused by Mudflaps scratching at the dog.  The dog's injuries were very minor.

I've also cleaned up the Links sections a bit: added some new links and deleted some non-updating ones.   I've been meaning to do this for a while.
Posted by Doctor Sparkle at 6:29 PM