Sorry for the hassle with Chrontendo Episode 39. Chris Osborn, of Juggle Chainsaws, pointed out that I referred to Fighting Road as Fighting Street several times during that segment.  Sure, I make a few errors or misstatements in many episodes, but repeatedly using the wrong title seemed to be serious enough to warrant a re-upload.  As for "The Adventures of Link," I didn't bother fixing that because, well... because Zelda II can go screw itself for all I care. Both versions of Episode 39 are still up on Youtube, but the revised version will, of course, be the one contained in the 25 disc Chrontendo Perfect (Remix) Collection Blu-Ray box set, when it comes out in 2027.

Work on Episode 40 has started, but I was a bit sidetracked last week due to my wife's birthday and a trip to the wilds of eastern California to check out the Black Chasm Caverns.  The typical images that come to mind when thinking of California are beaches, surfing, hippies, techno-geeks, and Hollywood.  All of this is completely accurate.  At this very moment I'm posting this from my iPhone while simultaneously carving a gnarly barrel off of Hermosa Beach.  However, the majority of California consists of farmland, desert, rednecks and quaint little towns in the middle of nowhere, in which every other building seems to be an antiques store. 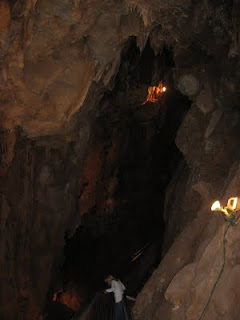 At the bottom of the chasm you can see an underground lake in which live tiny, blind, scorpion-like creatures.

Anyway, Black Chasm is one of several caverns located in old Gold Rush country.  It's not too far from the town of San Andreas (GTA fans take note: San Andreas is a real city, though small and not particularly interesting).  While Black Chasm is not as huge or impressive as such well-known caverns as Carlsbad or Mammoth Cave, it's still worthwhile for its odd formations. 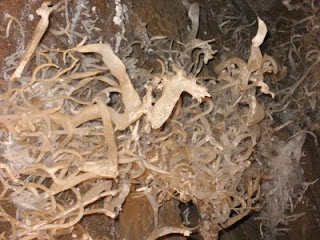 The "dragon" is the mascot of the caverns.

California culture certainly has a dark side to it; one that is manifested in video games such as Epyx's Winter Games and California Games, and now, in EA's Skate or Die!  Released by Konami's Ultra Games for the NES, SoD! is very much in the Winter Games mode: a collection of mini-games beset with inconsistent and needlessly oblique control schemes.  In fact, trying to play Skate or Die! caused Dr. Sparkle to fly into a bit of a rage.  Yet, despite its ability to infuriate the player, some folks out there remember it fondly today.  This is probably because back in 1988, we were young enough to have the time and patience (and lack of anything else worthwhile to do) required to figure out how to play this thing.  Even the instruction manual doesn't understand the controls -- it is completely wrong about the controls for one event. 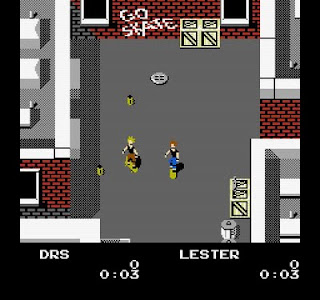 All skaters had crazy mohawks back in the 80s.

Does anyone out there actually like Skate or Die?  Has anyone tried playing it recently?  I'm wondering if its just me.
Posted by Doctor Sparkle at 3:19 PM

I used to love Skate or Die, but then I played it recently...

Yeah, not so good anymore.

I liked the downhill race and downhill jam events, the others were not as fun. I haven't played the game in many years, but even at the time two-player was the only way to play. I also played the C64 version, but I imagine the NES version is pretty much identical.

I remember "liking" Skate or Die as a kid, but I think it was more of a put on to seem "cool" because everyone else supposedly liked it. Honestly, I don't remember much of anything about it except having the similar experience of not understanding how to control the damned thing. I guess we've all been susceptible to hype at one time or another.

I can't wait for that Blu-Ray box set, by the way. Hopefully the format won't be dead by then, but then again it may be an appropriately antiquated way to go.

I played a lot of "Skate or Die!" on the NES as a kid, and years later played the PC version. It does have dumb faults such as always stuck in goofy foot when you pick your event, and umm... the pretty unplayable high jump event. Back in the day we only could do the high jump if we had a controller with turbo buttons, and on the PC I got a high score only by constantly smashing the keyboard with my fists. Other than the high jump, it was a really fun party game. The downhill race and jam portions were enjoyable with nifty shortcuts and easter eggs such as jumping on the police car at the end of the jam.

Recently playing, the most unplayable event for me was the freestyle ramp since I completely forgot how to do most of the tricks. I still love the game's soundtrack.

The only difference from the PC version is an option to pick your board color.

Also, I think the game was heavilly inspired by a 1986 movie called "Thrashin'." As far as I know, that is where the joust event comes from.

Multiplayer was the way to go for sure. It's the only game I can remember (aside from Risk) that all of my cousins could play and get a turn.

Just to let you know, I absolutely would purchase the Chrontendo Perfect Remix Collection if it were ever to be released.

Also, yeah, Skate or Die is a game that's only good when you're seven years old, and it's the only game you're going to get in a month, and it's totally radical because it's about boarding, man!

joedick from the future said...

If you're joking about that Perfect Remix release I'm going to cry.

i never played skate or die until i was a teenager with nesticle (man i hated that in 2000 but it did have somewhat functional netplay!) and i definitely couldn't get into it.

also, caves are great. thanks for sharing those pictures.

There is a chance you are qualified to receive a Apple iPhone 7.