Another hot slice of chronogaming goodness is served, courtesy of Dr. Sparkle! (Did that sound a just a little dirty? Good.)  Chrontendo Episode 39 is ready for you downloading and streaming pleasure.  Nice looking h.264 60 FPS versions may be found at Archive.  And a plain old streaming version may be watched on Youtube.  As always, I recommend the 60 FPS videos so you can see all the cool flicker effects, like the force shield in Gradius II.

Last episode left off in mid-December, right in the middle of the 1988 holiday shopping season. Tons of quickie cash-in games are crowding each other off the shelves of toy stores and electronics boutiques.  And you know what that means, right, kids?  Sequels!  An amazing five games this episode are sequels to earlier Famicom releases.  However, out of all the games covered this time, there are only a couple that anybody will actually give two shits about.

Gradius II is probably the finest game on display in Episode 39.  Konami was one of the most prodigious and consistent publishers in the earlier days of the Famicom, but in the second half of 1988, they slowed down a bit.  The Japan-only Gradius II could almost be considered a comeback, considering that their last big action title was Mad City/Bayou Billy. 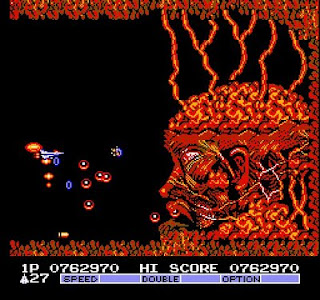 The arcade Gradius II (Vulcan Venture in Europe) was covered in the 1988 arcade roundup.  It was considerably more visually impressive than the first game, but it was also substantially harder.  Sure, the Vic Viper had some new laser and shield choices, but those didn't stand a chance against the waves of screen-filling projectiles thrown at you.  This made the arcade Gradius II punitively difficult.  Thankfully, in order not crush the souls of young Famicom players, Konami toned it down a bit for the console release.  A good deal of this is due to the downgrade in hardware; the Famicom couldn't handle that many enemies and bullets onscreen at once.  But Konami also made a few deliberate choices, such as beefing up the shield so that it could take multiple hits before disappearing.

Gradius II plays very much like the first game, only with more variety in the level design, and a whole bunch of brand new, enormous bosses.  Sure, the Core guy returns, and a few favorites from Salamander make an appearance, but line up of new bosses is perhaps Gradius II's finest feature.  There's even an honest-to-goodness boss rush level. 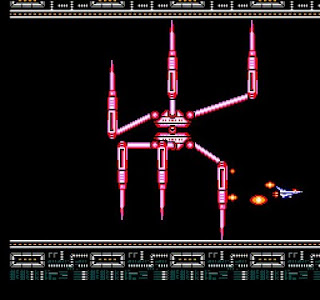 After playing Parodius, I can't help but think of a Las Vegas showgirl here.

The other big game this episode is Square's flawed but fascinating sequel to their company-saving hit, Final Fantasy.  If you've ever played Final Fantasy II, you'll recognize it as a classic example of the black sheep sequel, just like Zelda II and Castlevania II.  In this case, however, it set the pattern for the enitre series -- that every FF game would be dramatically different from its immediate predecessor.  This allowed it to stand in stark contrast to Enix's Dragon Quest series, in which each new game built upon the foundation of the one before it, by gradually introducing a few new elements into each sequel. 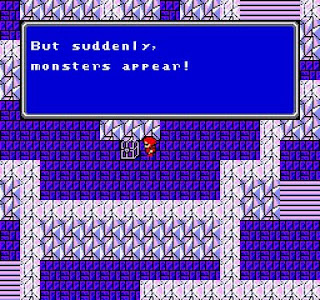 You can't open a damned treasure chest without finding monsters.

With Akitoshi Kawazu leading the design team, FF II eliminated character classes, experience points and levels, replacing them with a system in which your stats, weapon skills, and magic increase based on what skills or magic you use in battle. Likewise, max HP and MP increase as you lose HP and MP in battle.  This sounds fine on paper, but in practice it results in a very tedious system for leveling up, especially when it comes to magic.  It takes a long time to level up a spell: doing so requires casting it over and over and over.  For basic spells like Cure, this doesn't seem so bad.   But spells that are useful only occasionally will never be built up unless you use a cheat or exploit one of the game's (perhaps deliberate) bugs.  This is especially true with spells you acquire late in the game, such as Ultima.  You'll need to cast a lot of Ultima spells before it becomes very effective, which is ultimately (sorry!) more trouble than it's worth.  And I probably don't need to mention that if two characters have the same spells you'll need to level them up individually. 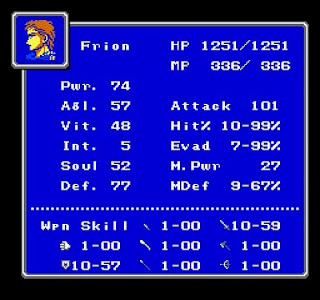 You have a lot of stats.

While the leveling mechanic sucks much of the fun out of the game, FF II is still quite notable for the many characters, items, monsters, and ideas that became series mainstays: such as Cid, Chocobos, Phoenix Downs, Dragoons, and so on.  One character, Lion Heart (or Leon Heart in some versions,) had a distant relative turn up years later in Final Fantasy VIII.

Beyond those two games, Episode 39 is mostly a vast wasteland of boring and/or crappy games.   Here are the worst offenders: 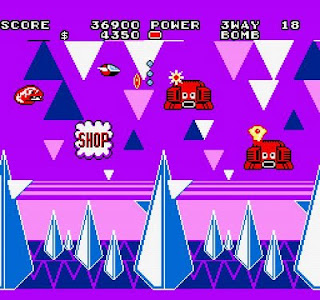 It's called that because Opa-Opa once killed a guy in prison.

A complete waste of plastic.  There was already a far superior version of Fantasy Zone II on the Master System.  The Famicom port, published by Sunsoft, suffers from ugly graphics and ear-piercing music.  There is no need for this game to exist.

Indiana Jones and the Temple of Doom

I already bitched about this game a few posts back.  And I'm still all worked up about it.  Why do you start the game by hitting the "select" button instead of the "start" button?  What were you thinking, Tengen?  Were you not aware there was a button on the NES controller that was actually labeled START?!?

Even weirder, Tengen thought IJATTOD so valuable that they released an unlicensed version to compete with Mindscape's official release. 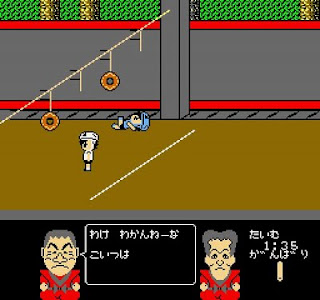 The umpteenth Family Trainer game and the zillionith Takeshi Kitano game.  Fuuun! Takeshi Shiro II caused Dr. Sparkle to have a bit of a breakdown this episode. 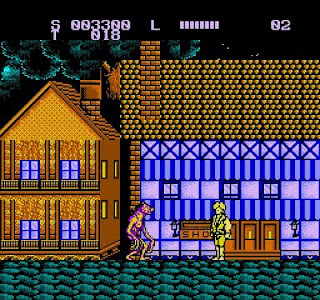 Omigod!  Did we forget to feed the werewolf before we left?

The arcade Captain Silver was pretty annoying.  The Master System version, covered in Chronsega 6 was a huge improvement.  The Famicom port is notorious for its emaciated werewolves and is far worse than the other two versions.  One-hit deaths have been replaced by a lifebar, but your weapon and agility have been seriously downgraded.  Most enemies now take multiple hits to kill, so the net result is a game where it's actually easier to get killed than in the SMS Captain Silver.


And we have a few non-offensive carts as well: 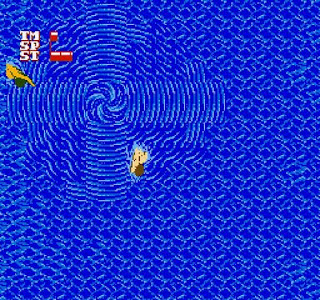 This year's Triathlon had pretty high fatalities, due to giant whirlpools.

The first of three racing games this episode.  Aside from the hilarious Engrish title, this KAC  game offers button-mashy swimming/cycling/running action.  It's pretty uneventful except for the deadly whirlpools in the swimming race.

An unabashed Hang On clone with a very unusual peripheral: an inflatable motorcycle featuring a built-in handlebar controller.  Yes, the player is supposed to sit on a big squishy airbag while playing Top Rider.

My favorite of the three, Cycle Race is a simple little bicycle racing game. It works quite a bit better than the cycling sections in Triathron.

This would be another utterly pointless fortune telling/horoscope if it weren't for one thing - this cat: 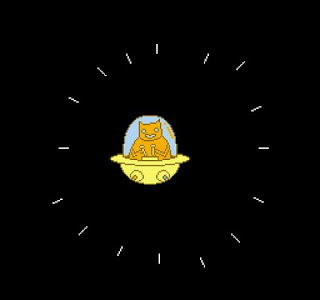 Micronics has created perhaps the greatest video game mascot ever.  Besides that, '89 Dennou has a few weird surprises, as shown in the video.

Another Tengen/Mindscape port of on old Atari arcade game. 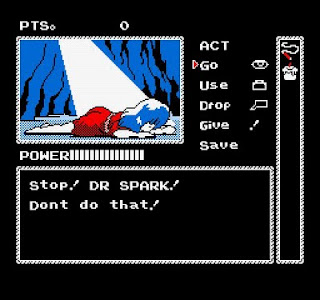 The game gets a little judgmental at times.  I don't see what the big deal is.  She's unconscious, so she'll never know the difference.


Micronics developed this wacky adventure game, which does an irreverent take on the old Japanese legend of the Woodcutter's Daughter.  Apparently, this tale was a favorite among video game developers, because it also inspired Nintendo's Shin Onigashima, covered back in Episode 22. 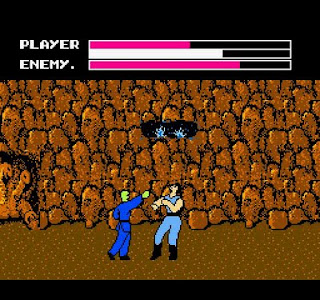 This is what fighting games looked like in the 80s.

Another non-distinguished title from Toei.  This time it's a single player one-on-one fighting game.

How would you feel if I told you that Chrontendo Episode 40 will finish up 1988 (almost!).  Yes, I'll be glad to move onto 1989, too.  One thing we have to look forward to in 1989 is more damned Western exclusive games.  1989-1991 is probably the peak of NES mania in the US, so the number of games aimed at the US market will explode during the next year or two.   I can hardly wait.  Mario's Time Machine, anyone?

Once again, head on over to Archive or Youtube and check out Chrontendo Episode 39.
Posted by Doctor Sparkle at 12:55 AM

It's a happy one in the morning when my RSS feed tells me there's a new Chrontendo afoot.

A moment of silence for these games and memories past...now an evening of hooch & sauce to catch us up...

That UFO cat really needs to be a meme if it isn't already. Also, I really dug the joke meta ending to the episode. Keep up the great work!

Yes! This is perfect timing as I'm just finishing up watching all of the most excellent Retro Core!

Hmm, someone should work on an animated gif for that cat...I look what I can do.

So the game is definitely Fighting Road, right? Because you kept saying Fighting Street and I couldn't help but think "Isn't that the name of the Street Fighter port?"

Dr. S, there's only one "Adventure of Link", not plural -- at least according to the label.

It was a great installment otherwise. Thanks!

Pro tip: You don't actually need to sneak your way through the legs of the spider boss in the Famicom version of Gradius II.

Just align yourself up with the core of the boss (in the vertical middle of the screen) so that your ship stays to the far right and your options are trailing you in a horizontal line.

The spider will walk straight into the line of fire and kill itself before it reaches your ship.

Oh man, I remember well playing the SHIT out of the NES Rampage at a friend's house back in the day...though I must admit, I don't remember it being QUITE so ugly. We actually pulled an all-nighter and BEAT that sumbitch, which is kind of insane in retrospect--what, a hundred-odd identical levels? I don't remember what sort of ending there was. Almost certainly none to speak of. Still mindlessly fun, though, as was World Tour.

I really appreciate all the effort you're putting into this.

I never though of using the options to kill that spider boss, but it makes perfect sense now that I think about it.

Faster, Harder: That's part of what Chrontendo is all about: realizing just how ugly and pointless some of those 8-bit games really were.

Faster, Harder: That's part of what Chrontendo is all about: realizing just how ugly and pointless some of those 8-bit games really were.

Why I like watching these myself, reliving those terrible days!