Things have been busy on the Chrontendo ranch lately, but they should be calming down soon.  Once again, I feel obligated to report on the stuff that has been taking up my time -- time which could have been spent on Chrontendo.

No one was more surprised than myself at my participation in a Zombie Walk last week.  Being a man possessing a greatly dignified bearing, I was not actually dressed up as a zombie. Instead, I accompanied my wife and a friend, who were both in zombie makeup.  There was a pretty damned huge crowd of zombies, anti-zombie forces, and spectators.  Even in non-zombie form, I could feel a certain rush from the collective lack of inhibition that allows you to act really weird in public, scream and random bystanders, and pound on the windows of buildings as  you pass by. 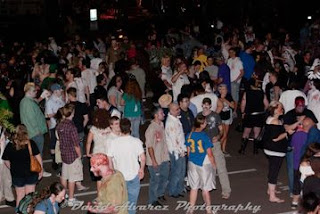 Some of the zombies had very elaborate, impressive makeup and costumes.  There are not those zombies.

One thing my fair city can take pride in is the "invention" of the zombie walk; it's been a local tradition for years, and quickly spread to other cities across the world.  (We also originated the IKEA dinner party, but that's a bit more underground.).  Here's a random Flickr photoset of the event.

I've  been going to inordinate number of social events lately, including this weird party a couple nights ago out in the farmlands past the outskirts of town.  It was a pretty huge party - a patch of land was turned into a parking lot, there were porta-potties, and people were setting up tents and spending the night. It was definitely not my crowd -- there was sort of a Jimmy Buffet vibe going on, and the DJ was playing stuff like that "Save a Horse, Ride a Cowboy" song.  Dudes in cargo shorts and Birks drinking Corona, if you know what I mean.

I did finally get to see the new Terry Malick film, The Tree of Life, which seems to be receiving a pretty limited distribution compared to his last two films, both of which played in mainstream multiplex type theaters.  Even among the art-house set, the movie has the power to cause audience grumblings and walkouts.  In fact, if I were to pick the three movies at which I noticed the most noticeable audience displeasure, it would be The Tree of Life, Malick's Thin Red Line and Kubrick's Eyes Wide Shut. 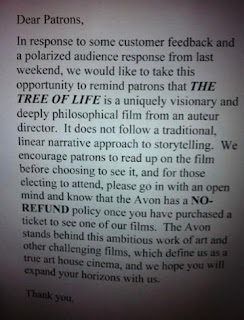 The famous "no refunds" sign from a Stamford, CT theater.

I found Tree to be pretty engrossing, partially because I used to know the person whom the Brad Pitt character is based on.  But for anyone out there planning to see it, I'll warn you in advance: it is very elliptical.   Not quite as imposing was the musical The Producers, which I got into a dress rehearsal of for free.  As much as I like the original movie, the musical is pretty corny.  Big Broadway musicals and I have never really got along very well.*


Also, I'm suffering a bit of brain trauma due to one particular game from Chrontendo 39: Final Fantasy II.  The most-hated FF game, with the exception of X-2, FF II is from the diseased mind of Akitoshi Kawazu, later of SaGa fame/infamy.  There are a couple ways to look at this game.  On one hand, it rewrites the rules of the typical DQ style 8-bit JRPG.  This would appear to be a good thing, but.... it rewrites the rules in the most ill-conceived way imaginable.  Anyone who has played it will remember it as the game in which you spend as much time attacking your own party members as you do enemies. 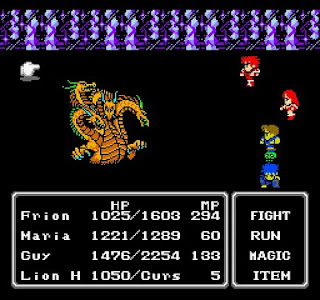 FF II features various callbacks to the first game.
Despite its bad reputation, I felt the game was interesting and important enough to play all the way through, so expect a full report next episode.

Also, there's this: http://nestitlescreens.tumblr.com/.  Not sure who is behind this.  But if you go to the archive page, it's interesting how Jaleco's City Connection stands out.  Also, congrats to DK 3 for introducing animation to the Famicom title screen.
*Nothing can compare to the Las Vegas Phantom of the Opera, however.  It's like the Michael Bay's Transformers of musicals.  And calling it that is probably being a bit unfair to Michael Bay.
Posted by Doctor Sparkle at 1:14 AM

I guess it's fortunate that I only know FF II by its reputation. I'll be interested to get your patented Chrontendo take on it. Maybe it will persuade me to attempt it one of these days after I actually get through some of the other (better) classic FF's, including the 5th one.

I finally got to see Tree of Life a couple of weeks ago as well and found it to be one of the most ambitious and awe inspiring films I've ever seen; even if I feel I didn't fully grasp every nuance of its themes and motifs. It's too bad I had a similar experience with a palpably hostile audience. They talked the whole time and that sort of thing makes me feel uncomfortable and unable to fully engage with the film. I would compare it to Enter the Void in that respect, except I was the audience member who was audibly disgruntled. I actually found it frustrating when, more than 2 and a half hours into the pretentious tripe, myself and my friend were the only ones sighing in disgust at the...how do I put this...inside the vagina shot. Why is Terrence Malick's clearly expert film being dismissed by so many people at the art house when Enter the Void was shown once at the multiplex style art house then given another gushing screening in my city's Cinematheque with an overly long extended cut? There is no justice in this world.

Being one of the select few who like the 2D Final Fantasy games much better than the 3D games, I had an easier time with FF II than I did with FF VII - which I've still never finished.

However, if you are looking for more entertaining/less pretentious films that contain "inside the vag" shots, might I recommend the Hanzo the Blade/Razor movies? Starring the enormously popular Shintaro Katsu, of Zatoichi fame? The Hanzo films manage to be campy, funny and jaw-droppingly appalling in the special way that only 1970's Japanese exploitation movies can be.

You think FF II is bad? Try the FF VII Version for the Famicom. Yes, that exists http://www.mobygames.com/game/nes/final-fantasy-vii_ , made by some deranged Hong Kong Demakers. Made in 2005. I don't know that to say else, it is just that stunning.

Final Fantasy II is still the only main FF game I haven't played, and I don't really have any intention to. Until recently I had only known it by reputation, but I did read a Let's Play of it within the last month. http://lparchive.org/Final-Fantasy-II/

While the game doesn't really seem like it would be much fun, it was certainly interesting to read about all the odd mechanics it had.

I'm also with you in liking the 2D Final Fantasy games more than the 3D versions. FFVI is still my favorite game of all time. You mentioned FFX-2 as possibly being more hated, but I actually dislike FFVIII a good deal more. At least X-2 had a fun battle system.

I personally think FF IV is the best, I just didn't play FF III of the ones for Nintendo Systems. Though, I have to admit, FF VI is a very close second, especially with the build up for the final acts.
Final Fantasy II is by no means a bad game, but it is very easily exploitable. The story isn't very gripping too, but is a good example of the little band of heroes fighting against the evil Empire...and a good example of J-RPG cliches, Empires are evil, Kingdoms are good, you find ruins of an ancient but advanced civilization, one of your guys is stupid but can speak to animals, the list goes on.