Update!  The Squall Double IPA has been consumed and turned out to pretty decent, though a bit mild for a DPIA.  I wouldn't place it in the same weight class as the big California Double IPAs such Pliny the Elder or Stone's Ruination.  I guess I'm just a chauvinist when it comes West Coast brewing styles.  Wine snobs may dismiss Cali wines, but our beers are pretty unbeatable.

As Chrontendo Episode 39 is prepared for editing, I thought I'd share this tangentially related beer offering. 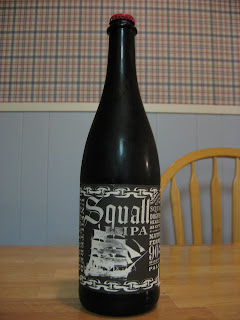 This is a Double IPA from Dogfish Head, a rather media-savvy brewer from Delaware, (they had their own reality show and an article in Smithsonian.)   The Double IPA is the most quintessentially West Coast-y of beers, so I'm a bit skeptical of the results.  Hopefully, it will taste plenty angsty and bitter.  And maybe a little bitchy?
Posted by Doctor Sparkle at 11:11 PM

Careful. You're gonna end up amnesiac and prone to falling in love with bratty teenage girls.

Nut browns for the win.

If you take a shot of whiskey at the right moment while drinking this it does double alcohol damage.