I've been away from Chrontendo for the last couple days, but now I'm back with a decent sized update. First things first: I've bought a new, larger SSD and  have installed it. As you might recall, I was having some issues with my SSD, and based on what I had been reading in the manufacturer's forum, my problems weren't that uncommon. I ended up getting a  larger SSD, a 256 GB OCZ Vertex 4, since I could use a little extra space. The thing arrived on Saturday, and, I'll admit, the packaging impressed me quite a bit. 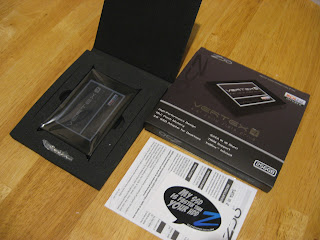 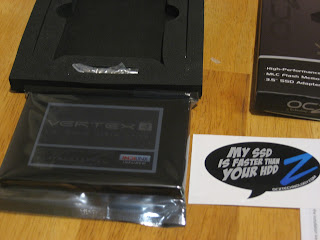 The box was dark gray with a nice matte finish. Inside, the drive was kept in place by a thick cardboard holder with this super-sturdy foam padding. The back of the holder contained a metal mounting bracket for the drive. I didn't need this, but it was a nice touch to include mounting hardware, and it made the package feel much more substantial. There was even a little sticker included. I know it's silly to put so much stock into the packaging of a piece of hardware, but when I bought my original SDD, I was surprised how boring and crappy the box was. When you buy a fancy new piece of cutting edge technology, you want the box to suggest the wonders contained within. I actually made a short film about building the new computer, in order to get some footage to test potential new editing software on. Maybe I'll post it someday, and you can see the other SSD's lame box.

Anyhoo... Chronsega 8 is going to be a pretty big episode, with several large, "important," games, and very little that could be considered to be total crap.  There are, however, several games that I personally don't care for. One game that I do like a lot, is the one I mentioned last time, Wonder Boy III: The Dragon's Trap AKA Monster Land II (which would have been the Japanese title, had it been released in Japan.) To make matters more confusing, there was also an arcade game called Wonder Boy III: Monster Lair, which received a TG-16 and Mega-Drive port. The Dragon's Trap also received a TG-16 port, but I don't want to make the issue any more muddled than it already is. The virtues of The Dragon's Trap have been detailed elsewhere, but I'll chip in my 50 cents as well.

The prior game in the series, Wonder Boy in Monster Land, introduced RPG elements - money, shops, armor, etc - to the series. But it still had a completely linear, SMB-like structure to the game world. WBiML also had a timer feature that greatly discouraged exploration and looking for hidden items. Wonder Boy III: The Dragon's Trap ditches the timer, and requires you to do quite a bit of poking around for secrets.  Instead of having a series of self-contained linear stages, WBIII:TDT uses a simple Metroidvania style structure. The game is invariably compared to Castlevania: Symphony of the Night due to its opening sequence. Much like SOTN, you begin WBIII:TDT in the last level of the previous game, Wonder Boy in Monster Land. Your character is fully leveled up with the best weapons and armor, and you replay the final boss of Monster Land, the Meka Dragon. After defeating him, you not only lose your equipment, but your stats and lifebar get downgraded to almost nothing. It's a surprisingly familiar moment to anyone who's played SOTN. Likewise, Metroid games usually start a similar prologue in which Samus loses all her abilities.

Fans of SOTN and the GBA/DS Castlevania games will experience a bit of deja vu when playing WBIII:TDT. While traveling though the game world you'll often encounter platforms that are just a little too high for you to reach and you requently spy areas that are unreachable from your current location. Later in the game, you gain the power to climb certain walls and eventually you'll obtain the power of flight. Another very Castlevania like area is an underground waterway. You can travel though the waterway but certain areas are off-limits until you gain enhanced swimming abilities later.  Once you've obtained these new powers, you'll not only be able to advance into new areas, but also you can revisit old areas and find hidden caches of money, special weapons, lifebar extensions and so on.  It's certainly the most advanced example of a Metroidvania type game we've seen so far. It's not perfect by any means - the controls are a bit wonky, and platforms are unnecessarily slippery, but I'd place it alongside the likes of Phantasy Star and Alex Kidd on the top tier of SMS games.

Also: regarding the chili I mentioned last time. There isn't really a recipe; it's more of a "put in what you like" kind of deal. But generally, it involves browning some meat - I used bacon (a lot!), chorizo and flat iron steak - then adding it to a liquid base. In this case the liquid was tomato sauce, tomato paste, beer and tequilla. From there add onions, garlic, diced tomatos and peppers. Obviously, the peppers depend on your personal taste and what you can find, but I used habaneros, jalapeños, Anaheims, a fancy heirloom style of pepper called a Jimmy Nardello, and some other type of locally grown pepper that I can't remember. You should also throw in a can of chopped chipotle peppers. Add any additional spices you want - I did chili powder, black pepper and fresh basil and oregano. Then add beans and simmer for a few hours. A really good trick is to add a bit of chocolate, since chocolate and chili naturally go together. This works the other way around, too: trying adding some chili power to your cafe mocha or hot chocolate!

Fianlly, as a bonus this post, I'm throwing in a bit of music. If you are a fan of Chrontendo, you must be pretty weird, so perhaps you enjoy music from off the beaten path. This is not Krautrock, but keeping with the Axis theme, here's a classic Japanese psychedelic/progressive obscurity, Flied Egg.

This is the title track from their 1972 ablum, Dr. Siegel's Flied Egg Shooting Machine, a mini epic of sorts, complete with a sing along chorus, groovy organ riffs, Zappa-esque goofiness, and sudden change in tempo and mood halfway through the song.  A stone cold classic in my opinion, though some, such as Julian Cope, disagree. Enjoy!

As for the music, I must admit I did enjoy it quite a bit. But then again I find music from that era to be exceedingly easy to like.

Alas I am ever a dilettante when it comes to music, so I know nothing of the bigs of that era, or any era for that matter. I can however usually narrow down a date for a piece of music down to the decade based on sound and feel.

The 70's North America can add good music to its list of accomplishments since grown horrendously decadent, such as movies.

Thanks for the music recommendation. Downloaded that album pretty much immediately after hearing that song. It almost seems like a lost Uriah Heep album at times.

Awesome, a new Chronsega is coming up. Can't wait! I was one of those lucky kids that had both an NES and SMS with tons of games growing up, and I must admit I'm quite fond of both systems. I actually started the "Chron" series by watching every episode of Chronsega, then I saw Chronturbo and lastly, Chrontendo (yes, I've seen all 45 episodes, LOL).

About the Wonder Boy series, I agree that Phantasy Star and Alex Kidd in Miracle World are top tier titles, but Wonder Boy games are pretty good, too. From the simple, platformy Wonder Boy, to the platformer with RPG elements Monster Land, to the Metroidvania-esque Wonder Boy III. Truly, the SMS has its gems.

Dr. Sparkle, for some reason I imagine you as a somewhat nerdy hybrid of Vanilla Ice and Corey Feldman, right down to the business suit get up that was popular for rap groups back then. Reason I come to this conclusion is that you've name dropped both in one form or another, though I wouldn't be surprised if you didn't resemble them at all.

Also, suppose for a minute you were the biggest celebrity around back in the late 80's and early 90's. As in, somehow, you became a huge, Michael Jackson-tier celebrity for making these Chron- series of videos. Your ego was so huge, you felt like having a game based around you and your exploits for any system of your choice. Who would you contract development for said game, and what system would you go for? And what would the game be about?

Hey, Mr. Tose, I see your have your own profile now. As for me resembling Vanilla Ice, it would take a lethal amount of styling products to make my hair do what his did. And those guys in the 90s dressed cool compared to the all the Daughtry/Nickleback looking douchebags out there today. My wife was pulling out some old photos yesterday, and I realize that with my gigantic glasses and facial hair, I had a look that would get me branded as a hipster today.

Also, I have a serious concern over "hiring" your narration, for potentially an animation. Your commentary will be obviously tongue in cheek (something along the lines of "I was not aware goldfish having tentacles, but then again, both are aquatic animals"), and will even mention "If you've enjoyed my Adonis like voice, then you will love my chronogaming series, so check them out".

Wow, didn't expect to see a link to a Flied Egg song in this blog! What a nice surprise. Another good Japanese rock band from the past is Murasaki. Flower Travellin' Band is a pretty interesting Japanese band too from early 70s. Anyway, really looking forward to the next episode.

Can't wait for the new Chronsega and all other episode as well. This series is by far my favorite thing to watch. Keep up the great work and I'll keep watching.

Hi there, first of all, amazing work, I love chrontendo vids.

I was wondering if it is ok to make a torrent of all your chrontendo videos and seed it ?

Retromask - back in the 90s, like many hipster types, I was into many underground Japanese bands like Fushitsusha, Ruins, High Rise, Acid Mothers Temple (and I saw them all live!), so it was only a matter of time before I got into older bands like Les Rallizes Denudes, Flower Travelin Band, Taj Mahal Travelers, etc. From there, you end up liking goofy stuff like Flied Egg.

Josh, all episodes are under the creative commons license, so you are free to distribute it in any way you see fit, in a non-commercial fashion. Thanks for the heads up.

I also cant wait for new metroidvania game. Thanks for sharing and good music.