Perhaps I should try, you know, occasionally posting something on this blog? Maybe, when I sit down at the computer, I could possibly work on Chrontendo, instead of watching videos of cats falling off tables and other such nonsense. (Actually, that video is quite impressive. "Quite impressive?")

So what's been going on lately? Well, first of all, I'd just like to say... "USA! USA!" after we broke the record for most medals won by a single country in the Winter Olympics. And congratulations to Canada for beating us at hockey, and I'm very sorry your little torch thingy didn't work properly during the opening ceremonies.

Uh, what else? My city just had its first "Beer Week" with many interesting brews being offered at the local restaurants and bars, and I finally had the chance to see the legendary Caroliner live. (There were at least 3 or 4 people videotaping the show. When is that gig going to turn up on Youtube?) And oh, yes: as silly and trivial as the Academy Awards are, I've been keeping my fingers crossed for The Hurt Locker. Maybe the Academy will make up for handing awards to Crash, American Beauty, and whatever won last year.

Speaking of the stupid and absurd, have you ever heard of a little game called Paris-Dakar Rally? By some odd coincidence, we just saw a very good game based on that very same race, called Victory Run. However, unlike Victory Run, CBS's Famicom game Paris-Dakar Rally has nothing to do with the real life racing event. You see, developer ISCO (of Seikima II fame) had no interest in making a racing game. Furthermore, it seems that the very concept of creating a coherent, well thought out game was anathema to ISCO, so they instead decided to slap together a bunch of hastily designed mini-games with the only unifying concept being motor vehicles. 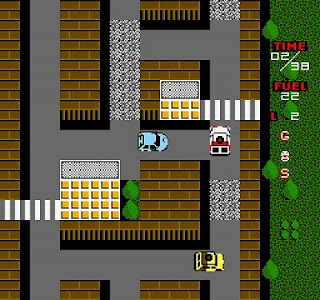 Yes, Paris-Dakar Rally is kusoge of the most fractured, head-spinning variety. The game starts out as an adventure game, for God's sake, in which you run around town, navigating through dialog trees, trying to find a sponsor and money for the race. Once the rally itself begins, you find yourself in an old-fashioned top down racing game, of the Zippy Race variety. OK, fine. But do we really need to throw in enemy cars that move at 10 times your own speed, constantly attempting to ram you from behind? Or a bizarre level in which you drive through a maze like web of streets and alleys under constant attack from suicidal motorists? Who are these guys constantly trying to ram their car into mine? The other racers? Shouldn't they be more concerned with trying to win the race, rather than causing car accidents? And in the next level, you find your vehicle outfitted with some sort of machine gun, required to fend off giant mice. I can honestly think of few other games with such a huge disparity between the ostensible subject matter and the actual game content. 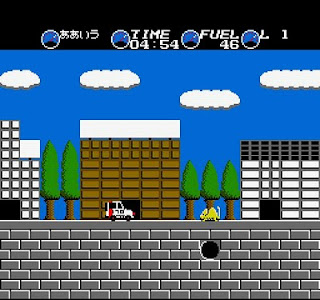 It's just like Victory Run, but 1000% more giant yellow mice.

Along with Paris-Dakar Rally, Chrontendo Episode 28's crazy game quota will be filled by Bandai/Tose's Kamen Rider Club. You didn't think we would last long with a Kamen Rider game, now did you? Yes, the world's greatest insect-headed tokusatsu hero finally get his own game. A simple platformer would not suffice for such an important icon of Japanese pop culture as Kamen Rider. No, instead we get a platformer with RPG style battles! Upon touching any of the monkey-faced leather daddies wandering around the game world, you get whisked away to a separate battle screen, where you force enemies into submission by repeatedly mashing the A button as quickly as you can. So its like a Mario/RPG/Track and Field type game, with exceptionally bad jumping controls thrown in for a bonus. 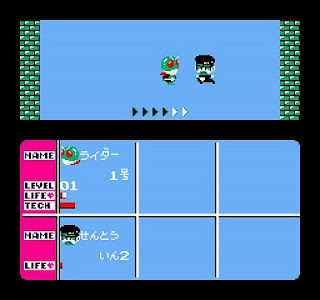 What's that you say? Good games? Episode 28 will have those as well, I promise.
Posted by Doctor Sparkle at 9:20 PM

By no means is not present. I know.

Good to see you still active. Can't wait for the next episode!!

Good point about "Crash" getting an underserved Oscar Doctor Sparkle. Let's hope Hurt Locker get's best film and Christophe Woltz gets best supporting actor this year. It's not just me and a few of my friends who thought Crash getting best picture that year over favourite "Brokeback Mountain" reeked of Hollywood favourtism. Anyway Waiting for ep. 28 with baited breath, as per a previous posting watching "Chrontendo", "Chronsega" and "Chronturbo" has really helped me get through a dificult time with regards to my health and I thank you for entertaining and informing me with great footage and commentary.

Cornervizion - I hope you're feeling better, and am glad you've been enjoying the episodes.

Crash has definitely found itself on the shortlist of "Worst Best Picture Winners", along with such gems as Greatest Show on Earth, but come to think of it, most of the winners of the mid-90s to mid-00s were pretty questionable. Shakespeare in Love? Gladiator? In fact, looking back at many past best picture nominees - its pretty surprising the sort of things that got noms.

The whole Lord of the Rings trilogy won a shitload of oscars in the mid-'00s, and welled deserved I would say.
Oh, and Cornervizion, the man is pronounced Christoph Waltz, he is from austria, you spelling would suggest he is french.

Probably, I am mistaken.