Swords Vs Guns: The Eternal Struggle

I've been a little distracted lately, due to some recent events. Most significantly, my wife's grandmother has died. A sad event made much worse by the fact that an individual outside the family is suddenly laying claim to her estate. My wife's father is in no condition to deal with such things, so it's now up to the grandchildren to prepare for the upcoming legal battle. On top of that, I've received my jury summons. Not sure how jury duty works in other countries, but here it involves going down to the courthouse and waiting in a hallway all day.

On our more positive note, I went ahead and bought that danged Final Fantasy XIII. You might not be aware of this, but some minor differences of opinion about FF XIII have reportedly popped on the internet. Apparently, its ruffled a few feathers, much like... well, every FF game since VII. Having played the first few hours, I can understand why some folks don't like the game. A western RPG fan once told me they considered the FF games to be like "watching a movie where you have to press a button every once and while." Square Enix seems to have designed the opening levels of XIII to perfectly embody that criticism. The first level is literally linear. You find yourself running down a long, narrow alley, interrupted by the occasional battle and frequent cut scenes.

The game very gradually opens up, adding new battle options, summons, classes, the ability to level up weapons, and so on. I assume this slow progression from heavy constrictions to freedom in game play is supposed to mirror the plot: you follow a cast of characters who rebel against a seemingly Utopian yet authoritarian and brutal society. Once I've played a bit further into the game, we'll see how that theory holds up.

But about Chrontendo: the stars of Episode 28 are two very successful third party games that command considerable followings to this day. I speak of Dragon Quest III and Contra. DQ III went on the be the third best selling Famicom title in Japan (after SMB and SMB 3,) while Contra was a huge hit in the US, spawned numerous sequels of varying quality, and introduced co-op game play to countless impressionable young gamers.

DQ III seems to be considered the ne plus ultra of 2D RPGs to Japanese gamers, although from the standpoint of someone living in the US in 2010, it's difficult to determine exactly why this is. Perhaps thrifty Japanese gamers liked its extremely high gameplay hours to Yen ratio, equating its length with value. 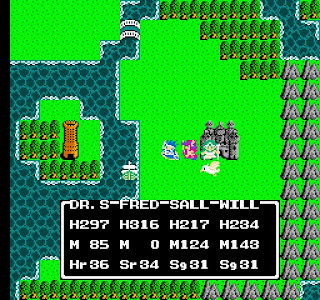 It's certainly an enormous timesink: DQ III features a substantially larger map, more towns and dungeons, and more side quests than its predecessors. Once you've obtained the ship, you are free to explore that world as you see fit. Addtionally, there's a healthy selection of magic, weapons and armor. And most signicficantly, DQ III adds party customization into the mix. Instead of relying on preselected characters as in DQ II, your protagonist can create a party out of wizards, pilgrims, soldiers, fighters and goof offs. Later in the game, you can even change the class of character. Doing so will allow you to create semi-hybrid classes: for example a solider that knows some magic spells. 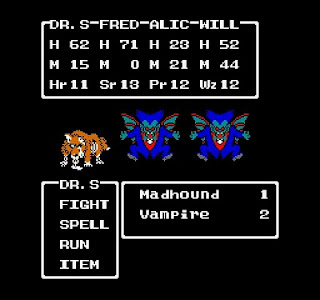 While it would be foolish to critique a game such as DQ III in terms of its plot (Evil being threatens the world! You must find your way to the castle and defeat him!), one of the game's strengths is the interesting side quests, each with its own little subplot. None of these are too terribley deep: they often involve star-crossed lovers or saving a village from some sort of threat, and they are always resolved by making your way to the bottom of a dungeon. But taken together, these many vignettes breathe a bit of life into the world of DQ III. You'll encounter a world full of pissed-off fairy queens, ghost ships, overreaching merchants and pepper loving monarchs. When you enter a new town, you are certain to encounter NPCs who have something more interesting to say than "I am Error." 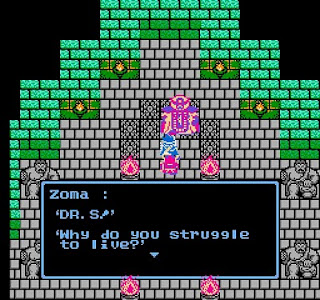 Despite all this, I'm not sure I personally even liked DQ III. It does seem a little too drawn out: battles are too slow and you'll need to fight way too many of them. After a while, all those dungeons and towers and caves start to look alike. The battle mechanics are unchanged from DQ II, and feel like a step down after playing the first Final Fantasy. And for God's sake, why do I have to go through so many menus just to open a locked door? As I mention in the video, those of you curious about DQ III might be better served by the unofficial translation of the Super Famicom remake.

Contra is the very antithesis of DQ III: short in duration, action packed, replacing magic spells with heavy ordnance. There is no exploration in Contra; instead you barrel through levels as quickly as possible. No need to chat up NPCs for clues in this game -- a shotgun blast to the face is the only suitable reaction when encountering another living being in Contra. Despite possessing all the usual trappings of hyper-masculinity -- shirtlessness, headbands, combat boots, machine guns and well-defined pecs -- Bill and Lance of Contra are actually quite delicate creatures. A single bullet or even brushing up against an alien creature will send them shuffling off this mortal coil. By contrast, in Enix's universe, even a old guy in a robe or a girl in a bunny suit can take a few fireballs and then walk it off. 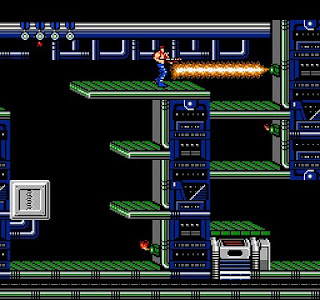 How courteous of them to install the flame throwers at crotch level.

Which brings me to an obvious point about Contra. It's a very hard game. Notoriously so. Even using a well circulated cheat it's still tough to beat. It can also play a bit dirty at times. Respawning enemies can randomly appear at the edge of screen, catching the player off guard. Many is the time I've attempted to jump onto a ledge only to be hit mid jump by a bullet from a suddenly materialized enemy. Enemies constantly pouring onto the screen, bullets flying from multiple directions - this sense of controlled chaos shows Contra's close relationship to shoot-em-ups. Just like Konami's Gradius, taking a hit will cause to lose your special weapons, making the game a hell of a lot harder. Still, the game always manages to seem conquerable. Like the best Konami games, the controls are spot on. While Contra is very challenging, it's certainly not the hardest game ever made, and I wouldn't compare it to stupidly impossible games like Battletoads. 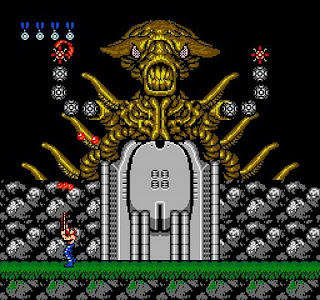 While two player co-op games had been around in arcades for a little bit, Contra was the title to bring the concept to the hearts of console gamers. Most of the early big hits for the NES were either single player games such as Zelda, or game where the players alternated turns, such as Super Mario Bros. Of course, kids were much more patient back in the 80s, and it was perfectly acceptable to sit there watching someone else play a game, waiting for them to die. But with Contra? It was always your turn! And thus the epic battle between player vs. player and co-op in video games began. 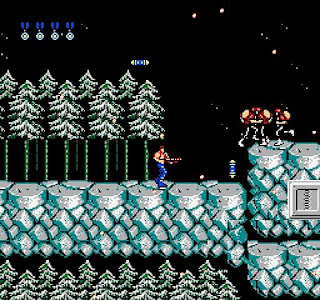 I've been making a wee bit of progress on Episode 28, so keep your eyes peeled.

Both my wife and I work for the same company. I've found out today that the office that I work at and the one she works at are being merged, with a substantial chunk of the workforce being laid off today. Unfortunately, we both have today and tomorrow off, meaning we have no idea whether we still have jobs or not. I've been unable to reach my boss at work, so I'm currently twisting in the wind. I'm just hoping we both don't get laid off.
Posted by Doctor Sparkle at 2:14 PM

Personally, I think the final... third? quarter? of DQ3 is a pretty great moment in RPG storytelling. Just the idea of suddenly discovering that you're literally making history makes me grin.

Also, there was a Game Boy Color port of DQ3, which was also simplified interface-wise, but is otherwise not all that great, despite the addition of Iitadaki Street minigames at various points.

I hope you still have your job!

Thanks a lot for all of your great work!

Keep it up. Greetings from Sweden.

Oof, tough week :( Hope things work out on both the personal and professional fronts.

On a lighter note, I'm looking forward to your thoughts on DQ3. I only played the first one, and that was in 1990, so I'll be curious to see how the later ones held up over the last *cough* 20 years (eep)

DQ III is certainly not a bad game, and the last part is quite cool, but I felt the impact was dulled a bit by the fact that something similar was done in DQ II.

The GBC remake seems to be based on the SFC version. There will be a little clip of the intro in Ep 23. It seems OK, but obviously can't complete with the 16 bit visuals.

I think my main issue with DQ III is the insane length and the amount of grinding required. I found myself getting a bit tired of it, and I was cheating to avoid having to grind!