I certainly hope so, because Episode 30 is going to have 'em. We are talking the real stuff, like, Hokuto no Ken bad.

But first of all, I'd like to point out that Chrontendo commenter Ruben Kraken, has created a Chrontendo Episode guide! I was thinking at some point I should put some kind of index up of past episodes, but this is even better, as it has icons, notes on specific games, etc. It can be found here:

On the other hand, sometimes game companies don't always do a fantastic job. Sometimes they do a very bad job. And by "they" I'm referring specifically to Bandai, SNK and Toho, the perpetrators behind Kamen Rider Black, Ikari Warriors II and Dr. Jekyll and Mr. Hyde. 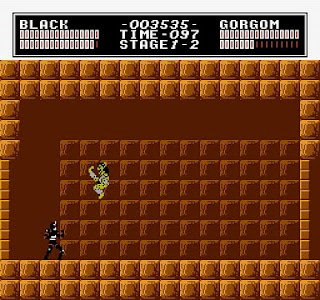 For folks outside of Japan, Kamen Rider Black is the least well known of these three. I was quite surprised to find out it was developed by Human*, since most of their previous work has been pretty competent. But, remember in the past I mentioned an interview from GDRI where it was revealed that the development of one particular Human game was done in about 4 weeks? I can only assume something of that nature occurred here, since Kamen Rider Black is one of the most minimalistic attempts at a video game I've seen so far. Barely the faintest hints of of level design, hit detection or even the slightest thought given to playability are to be found in this game. 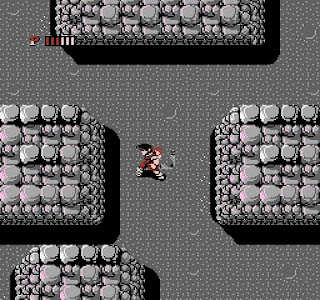 They forgot to give this guy feet.

SNK and Micronics once again combine forces in order to bring you a substandard port of an arcade game. In the case of Ikari Warriors II, the results are just a wee bit below substandard. Impossible to deal with controls, laughably unintelligible speech samples, some really ugly graphics, and what appears to be loading time when switching to your inventory menu. How do you get loading times on a cartridge game? I sort of liked the NES Ikari, but this sequel is just... awful. Again, a certain minimalist touch is present, especially in regards to sound effects. 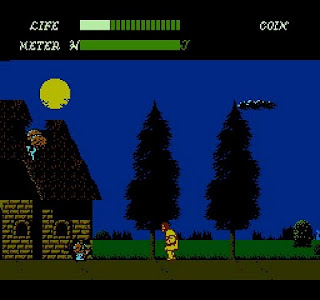 From screenshots alone, this game doesn't look that bad. Don't be fooled.

Dr. Jekyll and Mr. Hyde, was the second Famicom game from film studio Toho -- the first being the Compile developed Touch -- has developed a reputation as one of the worst NES games made. Partly this is due to some high profile ranting from the Angry Video Game Nerd and Something Awful, but unlike, say, Deadly Towers, this one really is a terrible game. Naturally, Bandai picked it up for US release.

Don't worry, Episode 30's not all bad games. We've also got two (or three, depending on your disposition) really great games coming up. Not to mention more military strategy games based on Sengoku-era warlords.

*More accurately, Sonata, as they were called prior to morphing into Human.
Posted by Doctor Sparkle at 9:31 PM

Bring on the Bad Doctor Sparkle. It's gonna be one fantastic episode! I love bad games, They have a horrible curiosity value to them which I can't resist, heck sometimes there's even the odd one I enjoy playing.

Speaking of shows.. Come to think of it.. I've yet to see a show around 50mins to an Hour dedicated to bad games, I know there's the AVGN, and Retrocore used to have "Shite Of The Month!", but a program celebrating the worst games in Computer/Console history (Just to be clear, I do enjoy AVGN), without the ranting and/or excessive swearing would be welcome.

Following up from the previous Blog entry for ep.29 Doctor Sparkle, I do better as to not trust Wikipedia so readily in the future. They say it's "The encyclopedia that anyone can edit", They don't mention however that it's also "The encyclopedia where info can be inaccurate" too.

Right on, glad you like the guide. I'm going to try and do a few every few days so it should be caught up with the current episode after not too long. Then I'll do the Chronsega and Chronturbo episodes.

Looking forward to the next episode!

Dude, nice index for chrontendo, cool work. I personally started one myself back in 2009, but it was just a plain and simple Excel file, nothing interesting. Yours is really useful...but I believe you already got enough credit for it, so I don't want to overdo it... =)

Psyched for the new episode Doc, looks like I will love it...cause its full of kasuge =)

KR Black isn't _too_ horrible, it just has amazingly unintuitive controls. His forward walk is pretty much there only to re-enact the ending sequence to the show. To get around flipping is where it's at. Backflips are the fastest way to move.

this is something i have never ever read.very detailed analysis.
ld hardas