Hey everybody! Chrontendo Episode 30 should out before too long. For right now, I just wanted to point out to all you fans of really horrendous computer systems that 1UP.com seems to have gone sort of Spectrum crazy lately. At Retronauts, they've started up a new series called "Spectrum Analyzer", with about 5 or entries so far. So if you've ever wondered why British folks of a certain age get all weak in the knees at the mention of the word "Dizzy," here's the place to find out.

And if that's not enough, there's even a gallery of the worst Spectrum box art, which is really quite eye-opening.

So, for those curious about "The Yugo of Home Computers", break out a bottle a of Carling, pop open a tin of Spotted Dick, and check it out.

In similar oddball territory, the HG101 blog has had numerous interesting posts lately, often about the international video game scene. But perhaps nothing as jaw-dropping as this write-up on the Korean Street Figther II animated movie. 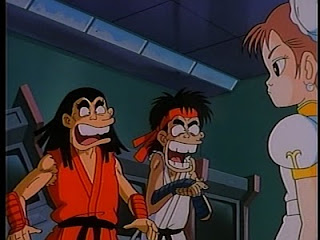 I think this picture pretty much says it all.
Posted by Doctor Sparkle at 10:43 PM

Thanks for the link there Dr S. As you gathered I'm a big Speccy fan, And it's even cooler when someone from the US acknowledges Uncle Clive's Legendary micro. I'll put a good word in so you can enjoy US/UK Dual Citizenship! :-)

Anyway looking at the artwork, even the professional software houses know how to cock-up their covers. The "Action Force 2" Quick-Kick dosen't even look like the action figure. It would've been better to use the cartoon images.

One more thing have you've seen "Micro-Men" by any chance? It's a comedy/drama about Clive Sinclair and Chris Curry who founded Acorn Computers?

Oh. If you haven't tried Carling lager yet.. Don't it's pretty awful. But Spotted Dick is very tasty, (Not spotted Richard as some places like to call it)

Heh, never much cared or the ZX Spectrum despite being an American who's older brother played with a Commodore 64 back in the day.

That kind of Korean knock-off anime stuff was very common back in the 80's and 90's. There's a whole rather painful history on that one I could share.

"That kind of Korean knock-off anime stuff was very common back in the 80's and 90's. There's a whole rather painful history on that one I could share."
Sounds like the makings of a blog! :D

There's a few links out there that already discuss this (my work is done essentially)! Basically, they lift certain designs, concepts and ideas from more popular Japanese productions and made their own movies as a result (though some American gleanings have occurred as well).

They've gotten better about it in later years, though I still feel they lack a little in the writing process.

Micro-Men looks pretty funny. Was Sir Clive Sinclair really that big of a maniac I wonder? And I guess nowadays, you can get knighted just by making a lot of money, as opposed to defending the realm or whatever?

Carling is apparently the biggest selling beer in the UK. For any Americans suffering from inferiority complexes (and I know plenty), when Europeans sneer about things like our bad taste in beer - be aware that they drink just as much bad beer in other countries as we do here. Carling, Carlsberg, Stella Artois, Heineken, Fosters, Victoria Bitter, Molson: all generic lagers just as bad or worse than Bud.

The Korean animation scene looks pretty crazy - sort of the animated equivalent of all those Turkish & Indian versions of Western films. Too bad most of that stuff never leaves its home country, but I'm sure every country has its subcultures that it doesn't want outsiders to see. Korea would much rather export Kim Ki Duk and Lee Chang Dong movies than this stuff. And Japan is undoubtedly not pleased that Rapelay and its like was discovered by the West. I assume the US is the same way... I'm going to hope that no one outside of this country has heard of Jersey Shore, right?

Amen to the beer thing Doc, if you ever tried the dutch Grolsch, you think you have redefine your taste of beer...because it is one, but tastes like dish water. But even better than british ale, I can't get that inside my stomach, it sickens me. Though the dark ale, like Killkenny or Guiness is swell after 2 litres or so.

And I cared for the ZX Spectrum, but for the ZX 81, not the later models. It was still monochrome and very primitve, but very cool, if you had fun programming your own games. Though today it would not something I would enjoy actually... .

I'm not sure of the ins and outs of Sir Clive's Psyche, Dr.S but he was in the news recently that he has married a woman half his age, But when you get to see "Micro-Men" the most riduclous incident that's shown did actually happen.

Funny thing about our "Knights Of The Realm" can you actually imagine, Ian McKellen, Elton John and Derek Jocobi marching up the fields of Agincourt or having historical legends written about them?

Agree with the British Beer it's awful, German beer is the type I prefer and Budweiser is gorgeous (But Pricey)

One problem with Grolsch is that the green bottles don't provide much protection from UV light, which can break down isohumulone molecules in the beer. Then the components of these molecules can reform into thiols, which taste awful. This is why you need to add lime to Corona to make it semi-drinkable. Green bottled beers tend to have this problem, like Heineken or Rolling Rock, the cheap stuff the AVGN drinks.

I think my favorite modern day knight must be Sir Run Run Shaw. I love Shaw Bros Kung-Fu movies... but it does seem a little weird that he got knighted.

There's a lot of good beer from the UK, but it seems you never see it in it pubs in the UK. Seems like every pub I've been to in London has Fosters, Bud, Stella, Guinness, & Carling on tap, whereas at my local American "British Pub" you can get Boddington, Bass, Old Speckled Hen, Newcastle and three types of Fullers on tap.

Anyone ever seen "The Fast Show"? There's a spoof spanish/portugese/welsh channel called "Channel 9" and they did a spoof beer advert which reminds me of Corona. They call it "Pissi Bir"

Ha! "Put a lime in the top." Definitely based on Corona. Mexicans have a weird relationship with Corona. It's a bit of cliche to state that Mexicans don't drink it, only Americans do. But it is still the biggest selling beer inside Mexico. It can't just be the tourists drinking it.

A lot of these Korean movies do show up however in the oddest of places (like the $1 DVD bin at Walmart).
http://www.collectiondx.com/article/dvd_review_space_thunder_kids

I had to pick up one years ago called "SuperKid" that definitely would remind you of something better...
http://www.film-source.com/titles/superkid.htm

It has become my conviction that embracing the Memory Hack recovery context and process is, at this time and for some time to come, the best chance mental health staff, services and service users have of transforming the way we look at, live and work with mental illness and transform it into sustainable mental health. Empowerment and partnership should be synonymous with recovery. I am not interested in being empowered or partnered on principle. I am interested in being well and acting from that with new intent. This assumes new strength. Do service users have such strength? I have had the unusual role, for a service user, of co-facilitating recovery trainings to local mental health service staff. It's worth noting that in itself this is a powerful example of how services are changing, and that I am grateful for the opportunity it gave me to meet and share experiences with local mental health staff, many of whom I know are now actively involved with embracing and creating the recovery context for and with their service users.

Gingko biloba seems to improve mental function. Be careful Brain C-13 with this one though since it does interact with some medications and can also cause stomach upset. Ginseng also can be helpful, but be careful if you have rheumatoid arthritis as some types of ginseng can aggravate arthritis. Ginseng may interact with medications as well. There are two stereotypes in circulation about aging and mental ability - a negative one and a positive one. We associate aging with becoming slower, less 'on the ball', and with memory loss. We also may link aging with the idea of wisdom and negotiation skills - useful for many contemporary social problems. In our arguably youth-centred culture, exercising more cynicism, we may reflect and assume that there will indeed be scientific evidence for the negative stereotype but not the positive one. We may assume that the positive stereotype exists just to make older people feel better about their lot.

This can also be a difficulty for those who may HydraLyft not have the money or the time for the prescription refill and dermatologist visits. Fortunately, there is a proven natural treatment you can use to cure this condition and restore skin back to its natural beautiful state. Below are a few rosacea natural remedies which will be beneficial for improving the quality of skin. Change your diet: Your diet can play a crucial role in aggravating or improving your skin condition. On a diet for rosacea, you should avoid alcohol, chocolate, spicy foods, cheese, and hot beverages, as far as possible. Replace them with fruits, vegetables, whole grains, and fish rich in omega 3 fatty acids. Take probiotics: Add a probiotic supplement to your diet. Probiotics help to increase good bacteria and improve skin health. It can also help in reducing the itchiness of skin and the healing process.

When the skin is stretched beyond normal limits HydraLyft it loses some of its elasticity causing the skin to tear. This leaves behind unsightly stretch marks. Probably one of the most damaging effects of these ugly scars to a woman is a blow to her self esteem. When looking at herself in the mirror remembering when her skin was beautiful, smooth and without a blemish. Many studies have shown that these skin scar marks are one of the top causes of a woman's insecurity during her pregnancy. Prevention is absolutely the best way to prevent skin scarring and it's important to start early. Immediately start drinking more water. This keeps the skin hydrated and is critical to healthy skin and helps with constipation. It is critical as soon as you become pregnant to keep the skin moisturized on a regular basis. This softens the skin and promotes elasticity.

School has become an ever larger part of my son's life and Brain C-13 Review he is on his way to junior high school next year. But as he advanced through grade school it was apparent that he was not going to be able to keep up with the level of work each grade required. His socialization skills have improved dramatically, but that was not the case when he was five or six or even seven or eight years of age. Early on the sight vocabulary words were impossible for him to read and recall, his vocalizations were often unintelligible, and he became angry with me on more than one occasion because I would ask him to repeat himself. An IEP, (Individual Education Program) was established for him when he entered first grade and these individually designed learning programs have been updated annually since that time. This tool, or road map, is one of the best ways to track a child's progress through his or her school career.