There seems to be a natural human instinct to want sequels. After all, if we like something, we tend to want more of it. From The Odyssey up to Iron Man 2, human culture has produced plenty of followups to successful artistic creations, so it's only natural that the video game industry would get in on the act. Since early video games were usually pretty light in the story department, sequels to 70s games tended to be refinements or enhancements rather than continuations of the original games' plots. Since you inevitably died and Earth was destroyed in Space Invaders, it would be difficult to think of a Space Invaders Part 2 taking place chronologically after the first game.

By the early 80s, little stories and characters had been inserted into electronic games. We saw Mario topple Donkey Kong from the top floor of a partially constructed building, so it's quite possible to imagine that shortly afterward, DK was locked in a cage by Mario and then rescued by one of his gorilla relatives. Around this time, genuine video game sequels, such as Donkey Kong Jr. and Pitfall II were born. Over the next few years, expectations for video game sequels became standardized: a sequel should be very similar to the first game, but also be a bit more "advanced." This might include: improved graphics, more sophisticated gameplay, perhaps the game might be a bit longer. Super Mario Bros, Zelda, Castlevania and Dragon Quest all followed this template to some degree in the period from 1986-1988. 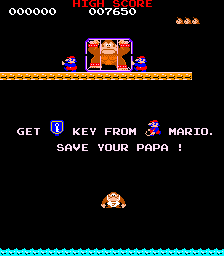 Donkey Kong Jr. picked up right where the first game left off.

However, in early 1988, we find Sega mostly ignoring this template. The upcoming Chronsega Episode 5 will cover the first half of 1988, and we'll be seeing titles bearing the names of Fantasy Zone, Space Harrier, Wonder Boy and Alex Kidd! This is like the Chronsega All-Stars episode! Too bad these games are all somewhat disappointing. Probably the closest we get a satisfying sequel is Wonder Boy in Monster Land, which takes the original and gives it an RPG twist. Now Wonder Boy collects coins from slain monsters and can buy armor and magic from shops! Oddly, there is very little to connect Monster Land to the first game, beyond the name. Not to mention that Monster Boy was not really a new game, but one that had been in arcades for a year.

The remaining three games are less successful. Fantasy Zone: The Maze (Opa Opa in Japan) switches genres entirely, awkwardly wedging the titular hero into a Pac-Man style maze game. While not really a bad game, FZ: The Maze must have been a bit baffling for fans of the series. Space Harrier 3-D makes use of Sega's fancy Sega Scope 3-D glasses, but the game itself is virtually a rom hack of the SMS version of the first game. Essentially, it's Space Harrier with new enemy sprites -- far less ambitious that even the Japanese Super Mario Bros 2. 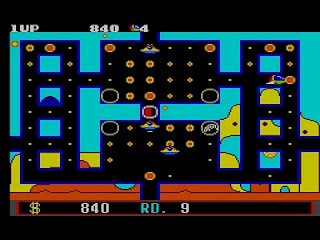 Really, Sega? What does this have to do with Fantasy Zone?

Then we have Alex Kidd. The first SMS game featuring Sega's would-be mascot was perhaps the best release for the console prior to Phantasy Star. While not as finely tuned as it could be, Alex Kidd showed enormous promise if a sequel was able iron out some of the kinks. Miracle World hit the shelves in late 1986, so by the standards of the era, a sequel was due approximately one year later. Unfortunately, what was finally released in March 1988 was not a true sequel to Miracle World, but instead a port of the very first Alex Kidd game, The Lost Stars - an arcade title from 1986. Again, The Lost Stars was not a bad game, but it was a step backward, not a step forward. 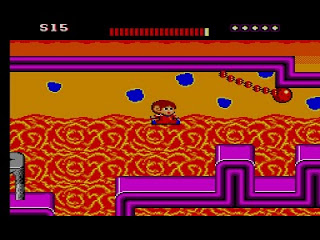 Not a bad game. Just not a real sequel. That was being reserved for the Mega Drive/Genesis.

So if you were a Master System owner and a fan of Alex Kidd, Fantasy Land or Space Harrier in 1988, it's easy to imagine you feeling disappointed or even a little betrayed by Sega's release schedule. To this day, people have speculated on the reasons why NES succeeded while the Master System failed. Add the inability to fully exploit their franchises to the list.*

The obvious question to ask is "why?" I assume this was not sheer obliviousness on Sega's part. More than likely, the Sega home office had simply given up on the Master System by this point, and was focusing all its energy on its soon-to-be released 16 bit console. Yes, believe it or not we are already nearing the end of the Master System's time as Sega's flagship console! When Chronsega 6 comes out a few months down the road, we'll see that a surprising number of games where developed by companies other than Sega.

*History repeated itself a decade later when Sega failed to put out a satisfactory Sonic game on the Saturn.
Posted by Doctor Sparkle at 6:37 PM

Just found Chrontendo from a post on Metafilter. I love it!

The quiet, scholarly presentation that shows the game instead of a hollywood starlet. This I like! Good job!