First of all, congrats to the SF Giants!  Score one for the old guys.  If I'm up for it, I might be doing a bit of rioting in the streets tonight.

Also, I'm really, really, ready for the 2010 elections to be over.  I'm at the point where I'm ready to unplug my landline due to the never ending onslaught of political robocalls.  Political races often get nasty, but I'm getting really disheartened by the sheer unpleasantness of this year's campaigns.  Here in Cali we've got a pretty weird gubernatorial election going on between a billionaire who talks like a 16 year old and a "hippie-fascist."  It looks like Jerry Brown will be elected, so we'll finally get to see those "suede denim secret police" we've been waiting so many years for. 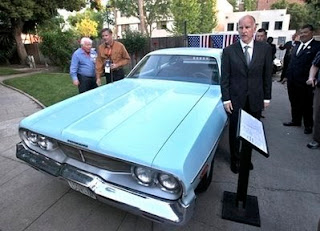 What?!?  That car is still around?

Finally, hello out there to all the folks from Metafilter.  Thanks to JHarris for posting a very nice link to each Chrontendo episode.  I see you guys have been pouring in in droves.  Welcome to Chrontendo and I hope you like the videos.  Also,  I've seen some traffic coming in from a post on the excellent retrogaming site Racketboy.   I don't know why I've never linked to Racketboy, but their profiles on classic consoles and genres are invaluable, so check it out if you're not familar with them.  Man, with all this attention from the internet at large, hopefully ED won't discover me next.

Which reminds me of  JHarris' chron-comics project, Roasted Peanuts, which takes a chronological look at the "most interesting" strips from the greatest comic strip of the last 60 years.  The guy also likes MST3K, so you know he's cool.

Well, the Stone Imperial IPA is kicking in, so I'm out of here.  Once again: a real update in a day or two.
Posted by Doctor Sparkle at 9:55 PM

Well, I'm hoping Brown wins on the basis that his attack ads were far far less sleezy than Whitman's (plus I tend to just support the candidate with more liberal social policies). Sadly, I won't be voting because I checked today and it turns out that I'm not registered (even though I remember registering back in January when I renewed my license). Anyway, none of that has to do with "chronogaming"... so, Go Giants!?

I literally think of that line from the DK song every single time I hear Jerry Brown mentioned in the news!

Well, I drive a Prius and shop at Trader Joe's so I should be safe from the organic gas chamber.

I'm a little surprised Whitman did as well as she did, considering the obvious similarities with the current governor, and the fact that her platform mostly consisted of tax breaks for her and her rich buddies.

I guess the most amazing thing about the election was that the GOP managed to find a candidate so terrible that she lost to Harry Reid, a guy with a 25% approval rating. A few months ago, he was the Democrat most likely to lose his seat.

BTW, thanks for the reciprocal link! By no means necessary of course, especially considering this blog has little to do with comics.

This blog has nothing to do with comics (other than the constant, never ending flood of manga inspired games from Bandai and their ilk), but I think Roasted Peanuts is a pretty cool idea. I guess I'm fascinated with such projects in general, and a Peanuts fan, to boot.