Back to Our Regular Schedule

Chrontendo Episode 34 is now out!  Head on over to archive.org and download or stream it!

This post is going to be short.  Why?  Well, I sliced off a bit of my thumb, making it difficult to type.  Let's get right down to brass tacks, shall we?

Besides 15 games, there is a mini-history of Atari/Tengen.  Or rather, sort of a corporate history of Atari, Atari Corp, Atari Games, Tengen and so on. Since we have our first Tengen game this episode, I felt it best to clarify the backstory behind the two companies calling themselves "Atari" in 1988. 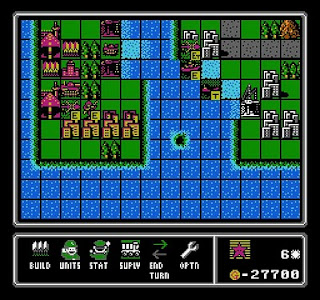 Nintendo's entry into the military simulation genre easily outclasses similar games from Bandai, Irem, Soft Pro and rest.  I've already mentioned how great Famicom Wars is; the franchise would only get better in later games, such as Advance Wars.

Also, now that we've covered Famicom Wars, it means the next game scheduled from Nintendo is none other than the Greatest NES Game Of All Time!  I can hardly wait!

Other good games this episode: 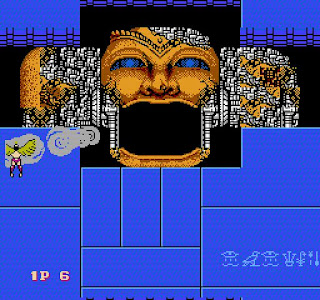 Notable as the game Mega Man's staff was forced to work on in exchange for Capcom green-lighting Mega Man 2.  It's a pretty decent shoot-em-up in its own right - it features a bit more variety than 1943, but is not nearly as creative as R-Type or Salamander/Life Force.  It also suffers from an incredibly anti-climatic final boss.

The third game in HAL's Sokoban-like puzzle game, and the first to be release in cartridge format.  While some sources conflate this release with The Adventures of Lolo, they are actually two separate games. 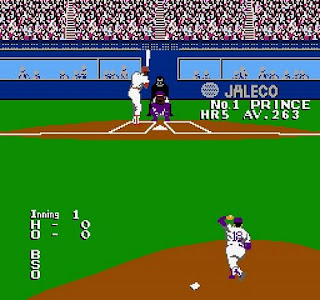 OK, this is not really a fantastic game, but compared to all the horrible baseball games I've been wading through recently, it's a breath of fresh air.  At the least the CPU's batters will not get a great hit out of every single pitch you throw at them.

So instead of a lame baseball game this episode, we have a lame soccer game. This Data East release doesn't even assign a function to the B button, that's how no-frills it is. 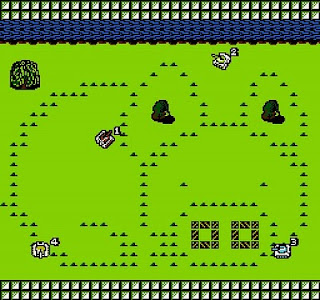 Sort of a pointless tank combat game, notable for only one thing: its rather surprising profanity laced loading screen.  Other than that it's a not-very-good take on Namco's Battle City.

Alright, I couldn't exactly figure out how to play Judo Senshuken.  It's a one-on-one Judo game, and looks like it might behave similarly to a Sumo wrestling game.  Yet after several failed attempts to produce any sort of noticeable onscreen action by pressing the buttons and dpad, I gave up on this one.  Still, just looking at it, I can't believe this game is any good at all.

The majority of games in episode 34, aren't quite "bad" yet aren't quite special enough to be considered "good."   Still, there are some interesting games here. 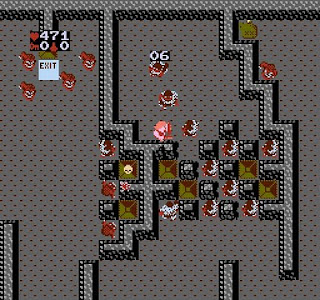 One of the three debut games from Tengen - the other two being US releases of existing Namco games - Gauntlet is a port of Atari's 1985 arcade mega-hit.  Missing, however, is the 4-player co-op and the many, many speech samples.  The resultant game is ugly and not very exciting, though it served its purpose of giving kids a taste of the Gauntlet experience at home. 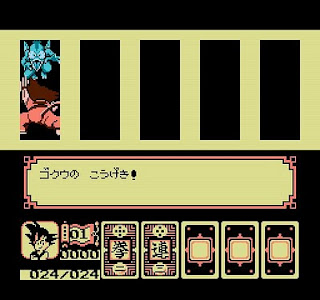 From Sunsoft, this wacky sequel to the 1987 action-adventure game sends the TV show's characters on an around-the-world trip to fight crimes in the wild west, Hawaii, Italy, and so on.  Just like the first Mitokoumon game, there's lots of horrible sounding (but technically impressive!), garbled synthesized speech.

Yet another TV show tie-in game, this one features a Kinnikuman character who received his own spinoff anime series and movie.  This Human-developed title looks like a Japanese take on King's Quest with a bit of one-on-one fighting thrown in. Tatake!! Ramenman is not the typical Famicom action-adventure game, but is too slow and boring to be of too much interest. 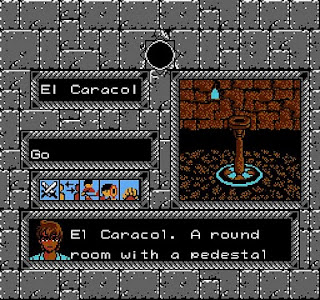 Seeing the names Nihon Falcom and Compile in the credits might get you excited for a moment, but this port of a 1987 Japanese computer game just isn't that hot.  HG101 has already gone into sufficient detail about its shortcomings.

The second wealth accumulation/stock market simulator game for the Famicom!  It looks a little rough around the edges, but its sequel was considered good enough to get a US release under the name Wall Street Kid. 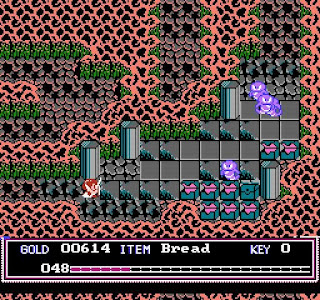 A super-simple action RPG from Pack-in-Video.  It's not bad - it simply lacks anything special to distinguish it from the many other Famicom RPGs of the era. An English fan translation exists. 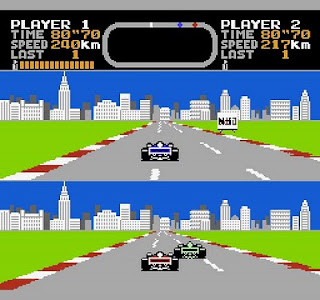 A unremarkable port of Namco's arcade F1 racing game.  The original was noted for its impressive (by 1987 standards) 3D graphics.  The Famicom port obviously takes a huge hit in this area, and doesn't bother to add anything interesting in its place.

There we have it. Enjoy!  Incidentally, I was trying to pratice a certain amount of discipline in recording this episode and make it a little shorter than average.  The final product is around 60 minutes, so this didn't quite pan out.

As always, check it out on Archive.org.
Posted by Doctor Sparkle at 10:54 PM

Great history of Atari/Tengen there!

Aside from Midway closing down the division that "Atari Games" became, the main company itself ended up going bankrupt last year, with it's assets being liquidated to other companies. I guess much of what was in their mitts is now been sold to Warner Bros. (yet again)!

For this second Famicom game, it is set during a story arc in the manga/anime known as "Piccolo Daimao", referring to the villain Goku goes up against this time around, and finishes the TV series prior to the start of "Dragon Ball Z" in Japan in 1989 (the manga was still called "Dragon Ball" anyway). This Piccolo isn't quite the same as the Piccolo most known in DBZ and so-on, but that's another story.

Another fantastic episode!...recently got turned onto Chrontendo and just finished all the episodes, plus the other Chron-xxx series..keep it up! This is a work of scholarship and a gift to humanity.

Gauntlet's monsters in NES Gauntlet, indeed, are tiles instead of sprites. There are a couple of possible systems for animating them that I can think of; they could either draw new tiles for them, or they could trade off some memory for speed and change the tile graphics definitions in real-time.

I actually kind of like Tengen's NES Gauntlet. At least it has an ending, unlike the arcade game! It also makes the player do a lot of things to win, including tracking down some fairly well-hidden secret rooms and earning passcode characters; you have to enter all eight characters before you'll be allowed into the final room.

One thing I'm surprised you didn't mention about Eggerland is that it's laid out completely differently from the NES Lolo games, that is, it's more of a giant maze than a linear sequence of rooms. (You may have mentioned that in a prior Chrontendo though, not sure.) Also, I believe Eggerland was originally a computer game too, although I'm not sure of this.

I do have to add, since I saw red when you said it: Gauntlet is only superficially like Rogue.

First off, congratulations on being about halfway done. I did the math and 1.055 games/15 games per episode runs us to around 70-71 episodes. Since there are some releases coming up that only combine a few games and some that just suck I figure this is close enough to halfway.

So anyway, as I was watching this I totally said "It's better than the f-ing Gradius titlescreen!" about Bakutoushi Patton-Kun right before you said you hated it.

It'd be interesting to know how much the Atari Games assets were sold for recently. When Warner sold Atari Games and Atari Corp back in the 80s, it was for a few hundred million. Later, Hasbro bought Atari Corp for $5 million! I can't imagine Atari Games are worth too much either.

JohnH - Thanks for the info on the Gauntlet enemies. As for Eggerland, this will be coming up in Chrontendo 35, as the next Eggerland game drops the maze aspect and used the more simplified style of levels.

As for Gauntlet and Rogue - what I was trying to say was that Gauntlet more resembled games like Commando (or going back further, Beserk) than other D&D inspired games like Rogue. When Gauntlet first game out, I recall people thinking of it as an arcade RPG, which now strikes me as rather odd.

Atari is known for their games, but sometimes I believe the name is cursed. It is the only brand I know which has the pattern of building up an interesting game-library, then they push out some titles out to die, and before you know it they get bankrupped. Then another big publisher gets the label, and it all starts over. Happened before, will happen again!

Oh, and thanks for not bringing up the typical Patton quote: "you magnificent bastard, *I read your book*!" I hear that all the time...

Damn, I should have used that quote for Desert Commander!

Hmm, if I'm going to be wrong then I'm glad I'm wrong and there will be a lot more games.

Downloading now, thanks for another episode! You are a force for great justice!

While it may be incorrect in English (i will defer to your knowledge in that area),
The Japanese Title for Zelda Ocarina of Time reads: ゼルダの伝説 時のオカリナ
And the last four gana (オカリナ, Okarina) would actually indicate the incorrect pronunciation.

Nintendo may have falsely understood how to pronounce it, or simply went with the more visually similar character (in order to pronounce it the other way, it would read "Akarina").

this all no doubt feeds into the confusion over its correct pronunciation.
so if you find people saying "Oh-Kah-ree-nah", mayhaps they are simply being influenced by the official Japanese title.

Excellent read, I just passed this onto a colleague who was doing a little research on that. And he actually bought me lunch because I found it for him smile So let me rephrase that.
ld hardas