Well, Chrontendo Episode 30 has only been on the shelves for a couple days now, and already there's a new version! For reasons unknown, a brief section of the video was poorly encoded and looked a little blocky - this affected the very end of Demon Sword and the box art shot of Fleet Commander. This has now been fixed.

Additionally, as I mentioned earlier, Famicom Grand Prix II came out looking pretty weird, due to the constant use of flicker effects. Commenter Johanh asked why I didn't render it in such a way as to merge consecutive frames. To answer his question -- I'm not really that familiar with video editing/encoding software and don't know how to do that. I know that AVISynth has some tools for combining frames when changing the frame rate of a video, such an effect that will blend two frames together. But I think these sort things are mostly used to convert NTSC videos to PAL. That AVISynth tool isn't able to convert from 60 FPS to 30 FPS.

For those who have no idea what I'm talking about, take the fork in the road effect in FGP II. Here are four consecutive frames: 1/15 of a second's worth. 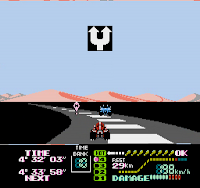 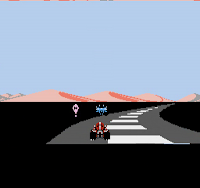 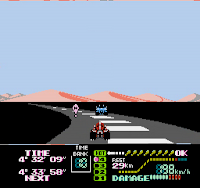 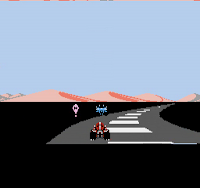 The Famicom isn't capable of transparencies, but developers managed to fake it using a super fast flicker. The first game I noticed to use the fake transparency effect was Getsufuu Maden; Konami seems quite fond of it.

Most video software such as Virtual Dub would convert a 60 FPS video to 30 FPS simply by removing every other frame. So the sequence above would contain only the first and third frame or the second and fourth - thus the flickering objects either won't show up at all or will look solid, with no flicker. I would assume that combining frames would cause a bit of blur, and wouldn't necessarily capture the flicker. Anyway, I'm a bit slow, so it took me a while to come up with a logical solution, which was to remove every fourth frame, and then to remove every fourth frame again. In other words - remove two consecutive frames instead of every other frame.

I re-encoded the FGP II segment using this technique and the results look pretty decent. While the flicker looks a bit more "flickery" in the 30 FPS version, the dashboard and fork in the road are visible in all their epileptic seizure inducing glory. Actually, the video isn't quite as eyeball-searing as the original game. So, if you want the corrected version, it's now up at Archive.org. However, for the superstitious among you, I will warn you the new video just happened to end up at 666 Megs.

Next time I encounter a game using this effect, I'll use this technique to produce a more suitable video. Unless any of you more tech-savvy folks out there know of a simple and effective way to half the frame rate while keeping such effects. So feel free to offer advice.
Posted by Doctor Sparkle at 3:29 PM

Oh, that's a pretty clever method, it works great. Thanks for bothering!

On Double Dragon, you had two lines that made me laugh out loud. Great episode.

I don't know if its true, but I've heard that they no longer issue license plates with "666" in them in the UK. Supposedly due to complaints from those who had such plates that their car accidents or whatever where caused by diabolical plates.

Great stuff as always, Dr. Sparkle! One question I have is the music you use for the episodes? Specifically the one that is used for the better NES games like The Legend of Zelda and Mike Tyson's Punch Out! ?

I keep saying I'll add details on the music to the end credits, but I always forget... The normal music between clips is
Tin Cans (Puerto Rican Remix) from the US post-rock group Tortoise. However, some games have more variations on the box art, making the intro a little longer, so I use a different music clip. In the past I've just used random stuff, more recently, like Punch-Out!! I use "3030" from Deltron 3030 - which was Del tha Funkee Homosapien, Kid Koala & Dan the Automator.